The United Nations General Assembly has voted to establish an independent panel to assist in the investigation and prosecution of those responsible for war crimes or crimes against humanity in Syria.

The United Nations General Assembly has voted to establish an independent panel to assist in the investigation and prosecution of those responsible for war crimes or crimes against humanity in Syria.

In a resolution adopted late yesterday by a recorded vote of 105 in favour and 15 against, with 52 abstentions, the Assembly – the universal body comprising all 193 UN Members States – decided to set up what will be formally known as the International, Impartial and Independent Mechanism to Assist in the Investigation and Prosecution of Those Responsible for the Most Serious Crimes under International Law Committed in [Syria] since March 2011, under the auspices of the UN.

The Mechanism, in close cooperation with the Independent International Commission of Inquiry on Syria (established by the UN Human Rights Council in August 2011) will collect, consolidate, preserve and analyse evidence pertaining to violations and abuses of human rights and humanitarian law.

The General Assembly also tasked the UN Secretary-General to develop the terms of reference of the Mechanism, within 20 days, with the support of the Office of the UN High Commissioner for Human Rights (OHCHR), as well as to undertake, “without delay” the steps necessary for its speedy establishment and full functioning.

The Assembly also called on all Member States, as well as on all parties to the conflict in Syria, civil society and the UN system as a whole, to cooperate fully with the Mechanism and, to provide it with any information and documentation they may possess to assist the delivery of its mandate. 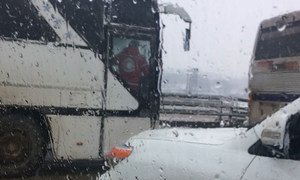