The United Nations human rights chief today urged the African Union to quickly establish the hybrid court for South Sudan to investigate and prosecute those bearing criminal responsibility for the atrocities.

“The knowledge that accountability structures exist and will be deployed against the perpetrators of mass atrocities can have real preventive impact,” UN High Commissioner for Human Rights, Zeid Ra’ad Al Hussein, told the Human Rights Council during its 26th special session.

Convening a special session requires the support of one-third of the 47 members of the Council. A letter requesting the session by a core group of States reads “a special session is needed because of the importance and the urgency of this situation.”

The hybrid court – which will combine elements of both domestic and international law and be composed of personnel from South Sudan and abroad – is envisaged in the peace agreement signed by warring parties in August 2015.

Expressing support from his Office (OHCHR), Mr. Zeid said that the tribunal should have a strong focus on command responsibility for atrocities, including conflict related sexual violence and ethnically based violence.

Mr. Zeid noted that the people of South Sudan have by now endured three full years of wanton conflict.

“Killings, sexual violence, ill-treatment, abductions, forcible recruitment and the looting and destruction of homes and villages are taking place on a massive scale across many parts of the country,” he said, adding that many fear conditions are in place for the conflict to take on a stronger ethnic dimension and escalate into massive and generalised violence.

Regarding sexual violence, he said that gang rape on such a scale is not the act of a few “rogue elements” as the authorities frequently imply. All armed actors in the country appear to be responsible, he added, urging close examination by relevant mechanisms of issues of command responsibility within both Government forces and the SPLA.

“With the beginning of the dry season, South Sudan teeters on the brink of disaster,” he said, explaining that weather conditions mean unidentified armed groups, militia and bandits can roam more swiftly across the landscape and there is high potential for clashes between Government forces and armed group fighters on multiple fronts.

Many South Sudanese have lost faith in the peace process, but when some local leaders have intervened to halt hate speech, this has led to decreasing threats of violence, he added.

“In other words, there may still be some space for consequential action to pull the country back from a worst-case scenario – and this Council has the opportunity for real impact,” he said, urging the 47-member body to use all possible means within its remit to discourage violence and push for peaceful dialogue in South Sudan.

Also addressing the Council was Adama Dieng, UN Special Adviser on the Prevention of Genocide, briefed on his recent visit to the country.

He said what he saw and heard there confirmed his concerns that there is a strong – even imminent - risk of violence escalating along ethnic lines, with the potential for genocide.

“With the stalling of the implementation of the peace agreement […], all of the ingredients exist for a dangerous escalation of violence. There is both motivation and the means,” he warned, calling on the international and regional community to take robust measures to address the situation.

“Genocide is a process; it does not happen overnight. And because it is a process, and one that takes time to prepare, it can be prevented. There are steps that should be taken now, without delay,” he said.

The Chairperson of the Council-mandated Commission on Human Rights in South Sudan, Yasmin Sooka, also delivered a statement.

Chairperson of the Commission on Human Rights in South Sudan Yasmin Sooka warns that South Sudan stands on the brink of an all-out ethnic civil war. Credit: UN News Centre

At the meeting, the Council adopted a resolution condemning the violations of human rights and international humanitarian law in South Sudan by all parties. 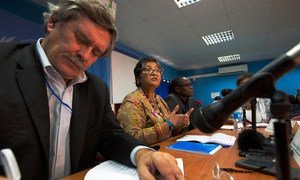 With “many of the warning signals of impending genocide” already present in South Sudan and amid a “mindboggling” scale of rape of women and girls, a team of United Nations human rights experts called on the international community to take immediate action to avert mass bloodshed, as they wrapped up a 10-day visit to the crisis-riven country.