WFP/Alexis Masciarelli
In some areas of Haiti, Hurricane Matthew has wiped out crops, undermining people’s ability to feed themselves.
23 November 2016

According to a situation report issued yesterday by the UN Food and Agriculture Organization (FAO), local food production and livelihoods have been “almost destroyed” in the south-west departments of Grand'Anse and Sud, where Hurricane Matthew first made landfall in early October.

“With much of the country relying on subsistence production to meet their food needs, restoring agriculture and fishery-based livelihoods is critical to avoid dependency on food aid in the coming months,” said FAO in the report.

The storm also aggravated the effects of El Niño-related events, including a drought that had already reduced food production and access to fresh water over the past year, severely impacting the capacity of Haitians to purchase food to eat or agricultural inputs to resume production.

Based on an emergency food security assessment, conducted by FAO, UN World Food Programme and the country's National Commission on Food Security, some 1.4 million Haitians are estimated to need humanitarian assistance of which 806,000 are in need of urgent food aid.

In response to the humanitarian crisis in the island, FAO has deployed experts and other humanitarian personnel to its Haiti office and mobilized emergency resources to kick start immediate interventions.

It is also supporting affected families through the distribution of seeds and tools for the implementation of the winter staple crop season and short-cycle horticultural crops, targeting more than 25,000 households in the most affected parts of the country.

The agency will also distribute fishing equipment to fishers who have lost their livelihoods.

However, the availability of funding continues to remain a challenge, less than 40 per cent of the $9 million required by FAO under the Haiti Flash Appeal has been received thus far, hampering its efforts to provide immediate crop, livestock and fisheries support to 300,000 hurricane-affected Haitians.

FAO has also developed a 12-month response plan, requesting $30 million to support 600,000 severely food insecure people, but so far has received only $1.5 million (5 per cent). 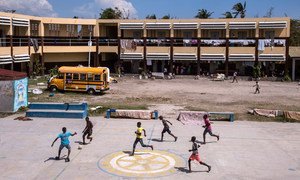 Hurricane Matthew disrupted education in Haiti for more than 100,000 children, affecting some 770 schools, 150 of which are still being used as shelters, according to the United Nations Educational, Scientific and Cultural Organization (UNESCO), which is working to restore education – one of the vital signs of recovery after a natural disaster.