In wake of violence, UN entities in Colombia underscore their commitment to protect civilians

Expressing concern over recent violence, including killings, that targeted social leaders in several conflict-affected areas in Colombia, the United Nations Mission in the country, as well as the UN Country Team, underlined the need to protect civilians and to build communal harmony.

“We support the decision of President Juan Manuel Santos to convene a high-level meeting of the National Human Rights Commission and the Attorney General’s decision to advance investigations into the latest facts presented,” the Mission said in a statement today.

“We hope that speedy investigations, as requested by the Office of the Ombudsman, and the measures that may be taken by the various State agencies, will contribute to protect the civilian population and create greater tranquillity among communities,” it added.

According to the Mission, there is a fear among the affected social organizations that the violence could undermine confidence in a stable and lasting peace on the eve of the expected signing of the final peace agreement in the country.

The final peace agreement, to be signed between Government of Colombia and the Revolutionary Armed Forces of Colombia-People’s Army (FARC-EP), provides for the implementation of several measures aimed precisely at ensuring security for leaders of social organizations, human rights defenders as well as for political action, in particular through the installation of the National Commission on Security Guarantees.

The statement further noted that the Office of the UN High Commissioner for Human Rights (OHCHR) is undertaking field missions to verify the alleged incidents and that the results will be made public once the missions have been completed.

The Mission and the Country Team, comprising UN agencies, funds and programmes on the ground, also reiterated their commitment to protect the civilian population, within the framework of their respective mandates and to provide continued support to build peace and respond to the expectations of the Colombian population, particularly in the conflict-affected territories. 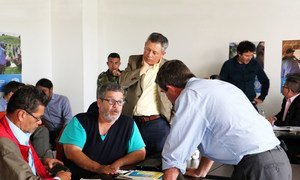 The tripartite Mechanism coordinated by the United Nations and comprising the Government of Colombia and the Revolutionary Armed Forces of Colombia-People’s Army (FARC-EP) has started investigations into a 15 November incident in the country’s Santa Rosa municipality that resulted in the deaths of two FARC-EP members.