“When children return to their communities as security improves, they will need to have schools and clinics to come to,” Christine Muhigana, UNICEF’s Deputy Director for West and Central Africa, said in a news release.

“Access to quality health and education is the cornerstone of any recovery, and the foundation for a peaceful future,” she added.

Due to clashes between the mainly Muslim Séléka rebel coalition and anti-Balaka militia, which are mostly Christian, the country plunged into a civil conflict in 2012, displacing hundreds of thousands of people. But it is now seen emerging from the conflict.

“The country is in a better place now,” said Ms. Muhigana. “But this is still one of the world’s most dangerous countries for children, and renewed violence threatens to undermine signs of progress.”

According to UNICEF, at the meeting in Belgium’s capital, leaders from the CAR will make the case for a $3 billion aid package to global donors, including the UN, the European Union and the World Bank.

UNICEF warns that fragile recovery continues in Central African Republic with more than 850,000 people still on the move, either internally displaced or refugees in neighbouring countries. Credit: UN News Centre

Efforts to reach every child in the CAR are limited by significant funding restrictions. Of the $55.6 million required in 2016 to provide basic services to children in the country, only $20.4 million has been received, leaving many projects under resourced and reduced in effectiveness.

UNICEF is calling on Central African leaders and global donors to put children first in the recovery plan by prioritizing basic social services like health and education for the most vulnerable, noting that only a balanced recovery plan with equity as the guiding principle can lay the foundation for a peaceful future.

According to the news release, insecurity in the aftermath of the conflict has prevented most of the 920,000 people displaced in early 2014 from returning home. Today, 383,000 people remain displaced inside the country while 468,000 have sought refuge in Cameroon, Chad, Democratic Republic of Congo, and Congo – with Cameroon hosting more than half of these refugees.

Violence and widespread displacement have made children especially vulnerable to health risks, exploitation and abuse, leaving more than one third out of school and 41 per cent children under five suffering from chronic malnutrition. An estimated 6,000 to 10,000 have been recruited into armed groups since 2013.

Most recently, repeated flare ups of violence have forced several non-governmental organizations to significantly scale down their interventions in parts of the country, slowing the progress of the national recovery plan.

An attack on the Kaga Bandoro camp for internally displaced people last month left 37 civilians dead, including educators participating in a UNICEF-supported programme.

Working with the Government and partners, UNICEF is strengthening the education system by training more than 1,300 teachers and building or repairing 172 schools in 2016 with funding from the European Union and the Global Partnership for Education. Existing projects are set to expand in order to bolster primary health care, improve access to clean water and offer psychosocial support for children who’ve experienced violence. 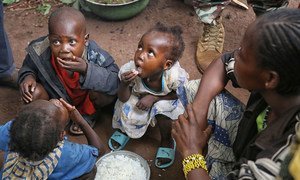 United Nations Deputy Secretary-General Jan Eliasson today said that the Central African Republic (CAR) can focus on stabilization, reconciliation and reconstruction now that the country has emerged from one of the worst crises of its history and was trying to establish legitimate institutions.