WFP/David Orr
For most children in southern Madagascar, the school lunch is their only nutritious meal of the day.

27 October 2016
The impact of severe El Niño-induced drought on crop production in southern Madagascar, where nearly 850,000 people are acutely food insecure, is likely to persist into 2017 and requires an intensified humanitarian response, the United Nations agriculture agency said today.

According to a news release from the Food and Agriculture Organization (FAO), the lack of sufficient rains in the southern region of Androy alone resulted in an 80 percent decline in maize production this year compared with the already reduced levels of 2015.

Prolonged drought also seriously affected the production of another staple food, cassava, in both Androy and another southern region, Atsimo-Andrefana, where cassava production dropped by approximately half.

People living in these areas have been hit by successive droughts over the last few years and their hunger situation is expected to remain severely stressed into 2017, FAO said.

Meanwhile, parched conditions in the regions of Atsimo-Andrefana, Boeny, Melaky, Betsiboka and Ihorombe had a significant negative impact on rice production, with declines of between 25 and 60 percent, according to a new FAO/World Food Programme (WFP) report released today based on data collected in July/August 2016.

Recently updated figures show that some 1.4 million people are estimated to be food insecure in 2016/17 in Madagascar’s three southern regions of Androy, Anosy and Atsimo-Andrefana. Of these, around nearly 850,000 are acutely food insecure, meaning they are not able to meet their food needs and require urgent humanitarian assistance, according to the most recent Integrated Food Security Phase Classification (IPC) analysis for Madagascar.

The drought in Madagascar’s southern regions has reduced the country’s overall domestic production of maize and cassava. National maize production for 2016 is estimated at 316,000 tonnes, down four per cent from the harvest in 2015 and 19 per cent below the average. Cassava production, estimated at 2.6 million tonnes, dropped by 16 per cent against the recent five-year average.

National rice production, however, benefited from good rains in the central, northern and western parts of the country – the main rice producing areas – and is estimated at about 3.8 million tonnes in 2016, some 2.5 per cent above the previous year, but still some five per cent below the five-year average.

It is essential that livelihood support begins immediately in order to take full advantage of the forthcoming planting season in November. FAO’s immediate agricultural response is targeting 850,000 people or 170,000 small-scale farming households, in the worst-affected districts. The assistance combines provision of quick-maturing and drought-tolerant seeds and root crops, such as cassava and sweet potatoes.

Farmers will also receive tools to replace those that may have been sold during the current extended hunger season. Support to livestock production will also be provided through supplementary feeding of livestock and animal health related activities.

To date out of the $22 million needed for FAO’s relief interventions, only $3.8 million have been secured. This funding is urgently needed to ensure farmers do not miss the coming planting season. Local agriculture must be restored to avoid long-term dependence on food assistance. 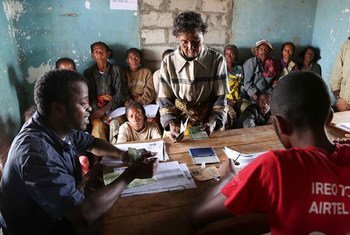 20 October 2016
Following a report that more than half of the population in southern Madagascar – 840,000 people – is experiencing alarming rates of food insecurity, United Nations agencies are responding to the most severe cases of malnutrition and acute hunger to prevent a catastrophe.