UN Photo/Kim Haughton
António Guterres, Secretary-General-designate, speaks to journalists at the General Assembly stakeout following his appointment by acclamation to serve as the next Secretary-General of the United Nations.
19 October 2016
UN Affairs

Adopting a consensus resolution put forward by its President, Peter Thomson, the Assembly acted on the recommendation of the UN Security Council, which on 6 October forwarded Mr. Guterres’ name to the 193-member body as its nominee for UN Secretary-General for a five-year period, ending 31 December 2021.

He will become the world’s top diplomat on 1 January 2017, and hold that post for the next five years.

Speaking about his appointment, Secretary-General Ban Ki-moon, said Mr. Guterres was “a wonderful choice to steer this Organization as we build on the progress of the past decade, while addressing the insecurity and uncertainties of today’s world.”

The UN News Centre caught up with Mr. Guterres soon after his appointment, and first asked what his most pressing or urgent priorities will be, when he assumes office in January.

UN Secretary-General-designate: If you allow me before answering your question, I would like to express – as this is UN Media – to express my deep solidarity with all UN staff. I had the privilege to be a colleague during 10 years of service in UNHCR and I am thrilled with the possibility of becoming a colleague again on the first of January, and I want to say that I am looking forward to working with all UN staff everywhere in the world.

And now coming back to your question: I think the first priority is with relation to peace. The lack of peace is the most dramatic problem we are facing in today’s world. We have seen a multiplication of new conflicts; old conflicts never die. Look at Somalia or Afghanistan or Democratic Republic of Congo; and the world has changed. There is a feeling of impunity and unpredictability and the international community has lost much of its capacity to prevent conflicts and to solve them. And so a surge in the diplomacy for peace would be my priority. I know that that depends a lot on Member States, and that the Secretary-General has a limited capacity, but acting as a convener, a catalyst, an honest broker, I hope it will be possible to bring more and more Member States together. And understand that in today’s world, the wars that we are having have become so nasty, the suffering of people is so terrible, but worse than that, the impact of those wars in our collective security became so dangerous that indeed, it’s high time for all those attached – involved in the conflicts or have an influence on the parties to the conflicts – it’s high time to come together and understand that the common interest for global security is much more important than the eventual divisions that might exist between them.

UN News Centre: So do you believe peace, or the lack of it, is the main reason behind most of the world’s crises: with the refugees, financial, armed conflict, and terrorism?

UN Secretary-General-designate: It is clear that all this is interlinked, and it is clear that a surge in diplomacy for peace is the best way to, at the same time, help us limit human suffering in all dimensions. And the refugee dimension is, of course, one of the most dramatic ones. 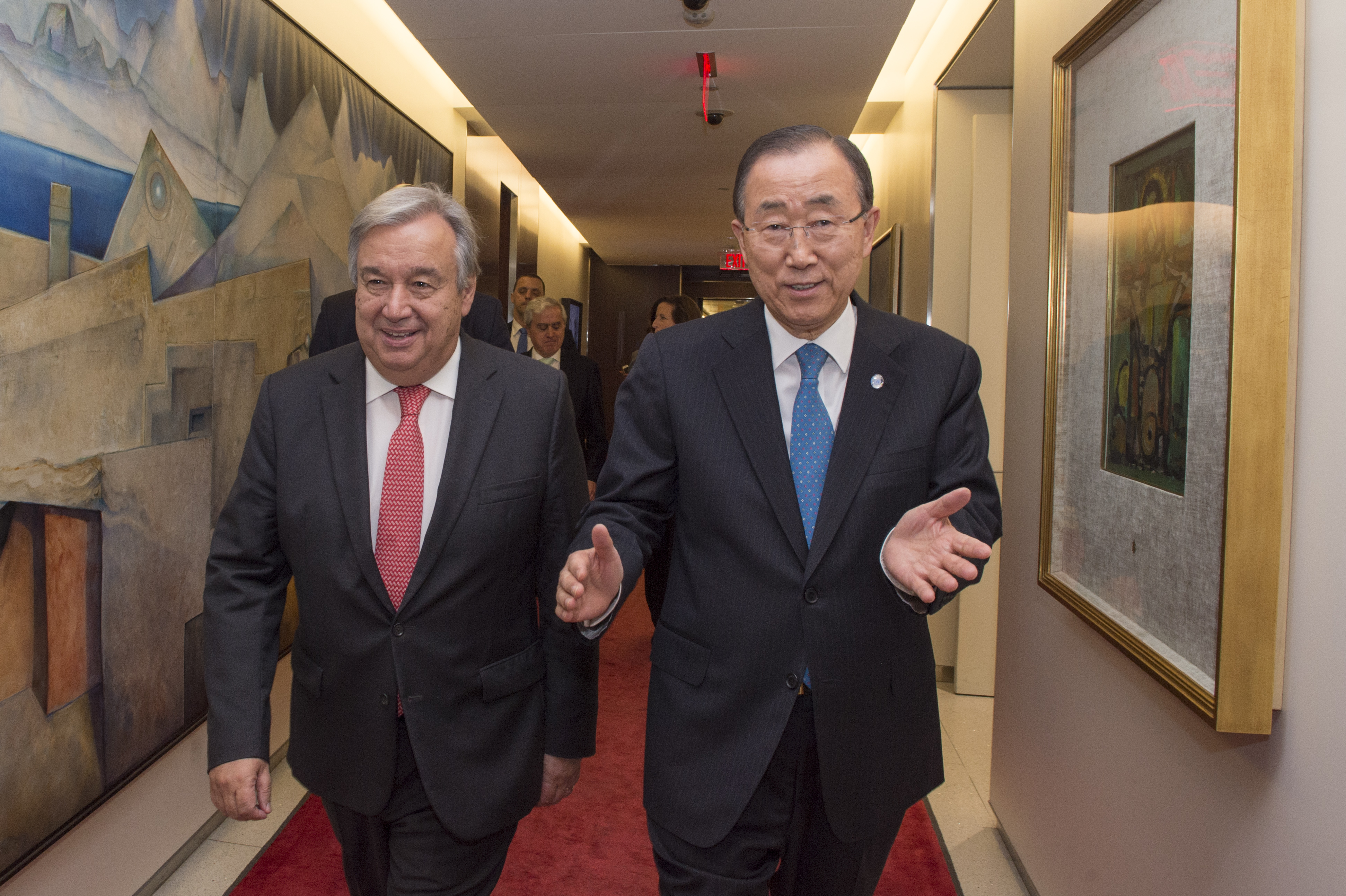 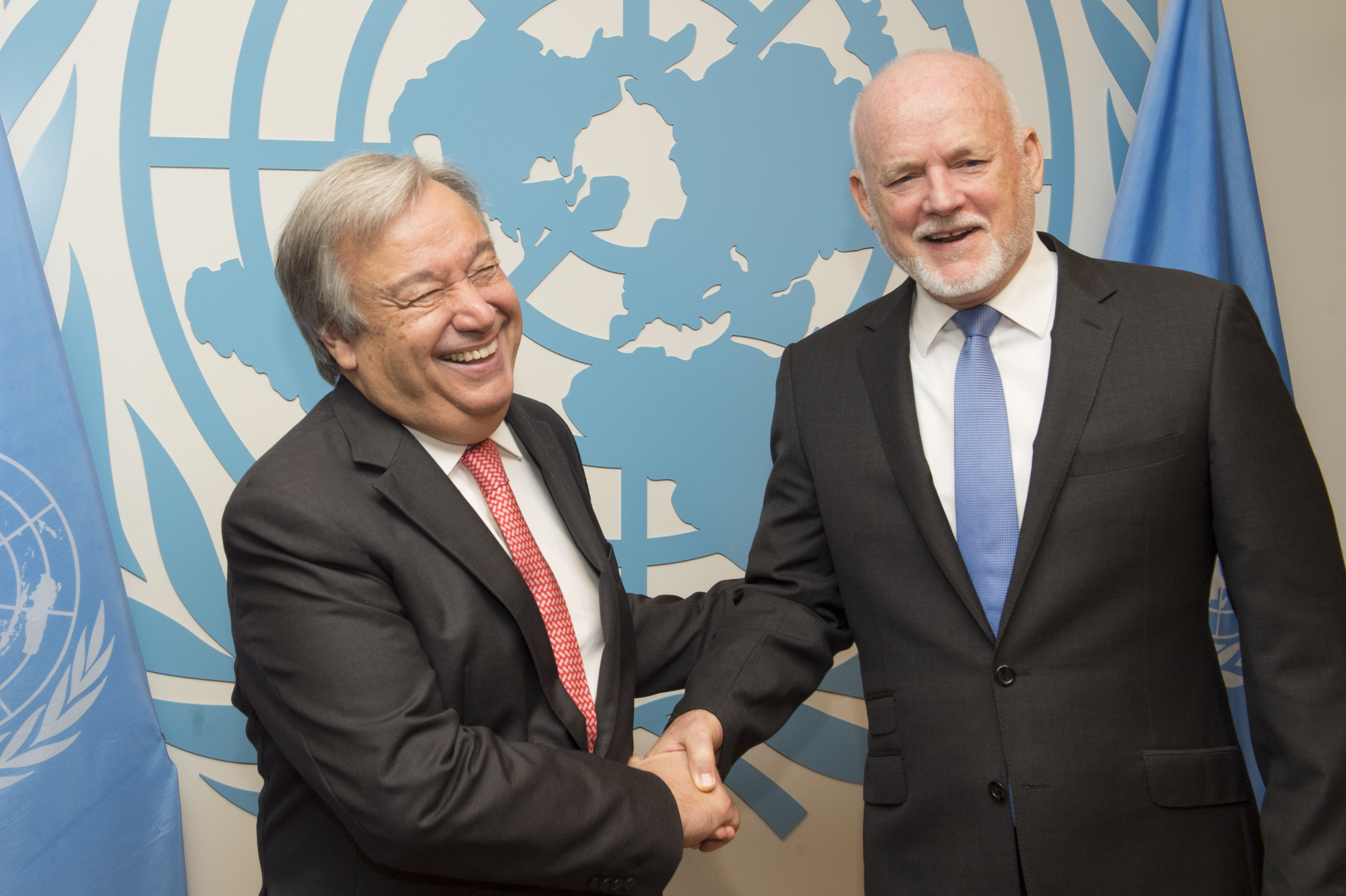 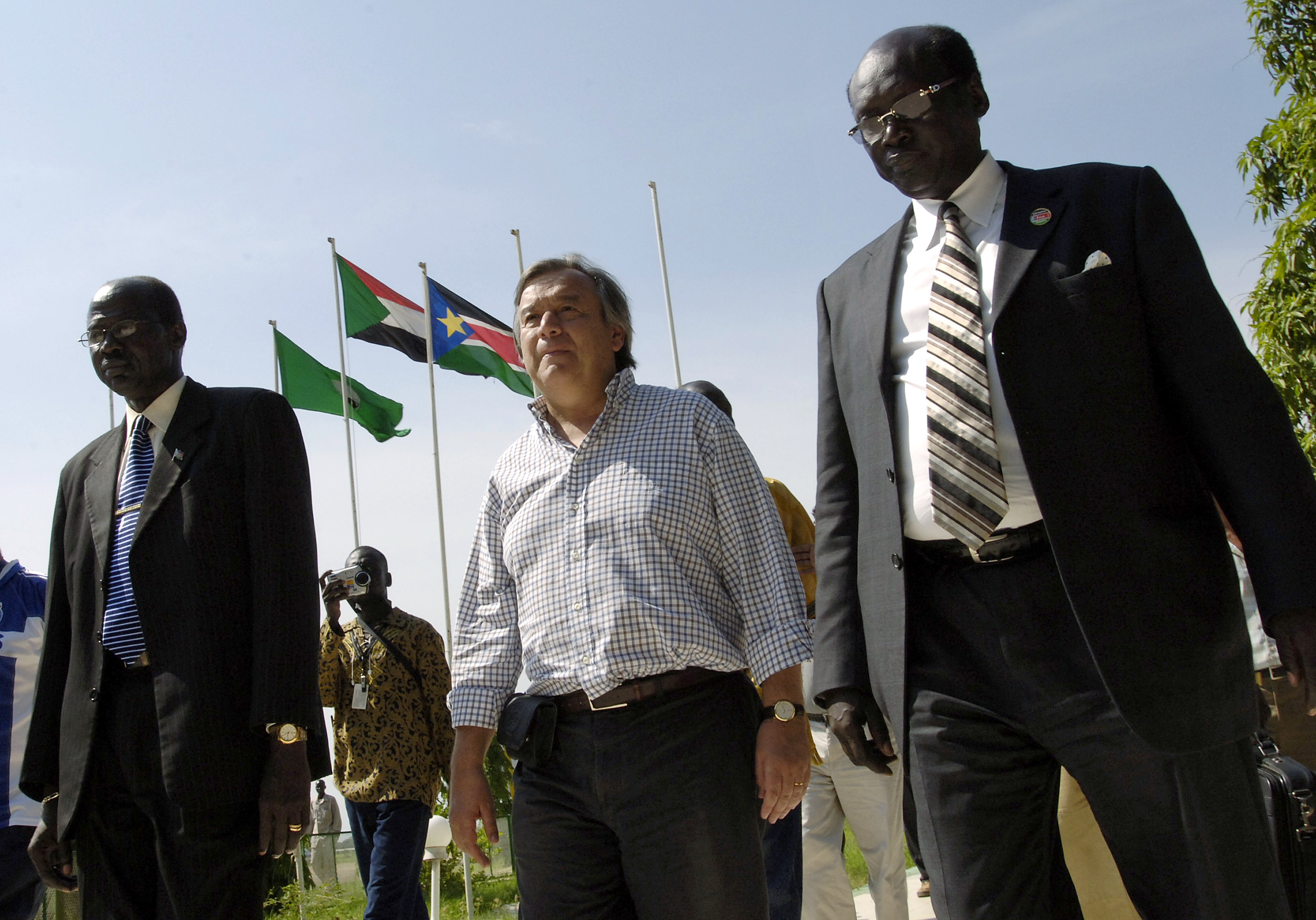 Every year on 20 June, the world pays tribute to the strength and courage of the millions of refugees scattered across the globe. During his tenure as UN High Commissioner for Human Rights Guterres took up a three-day mission in 2007 to Africa to mark World Refugee Day. UN Photo/Tim McKulka 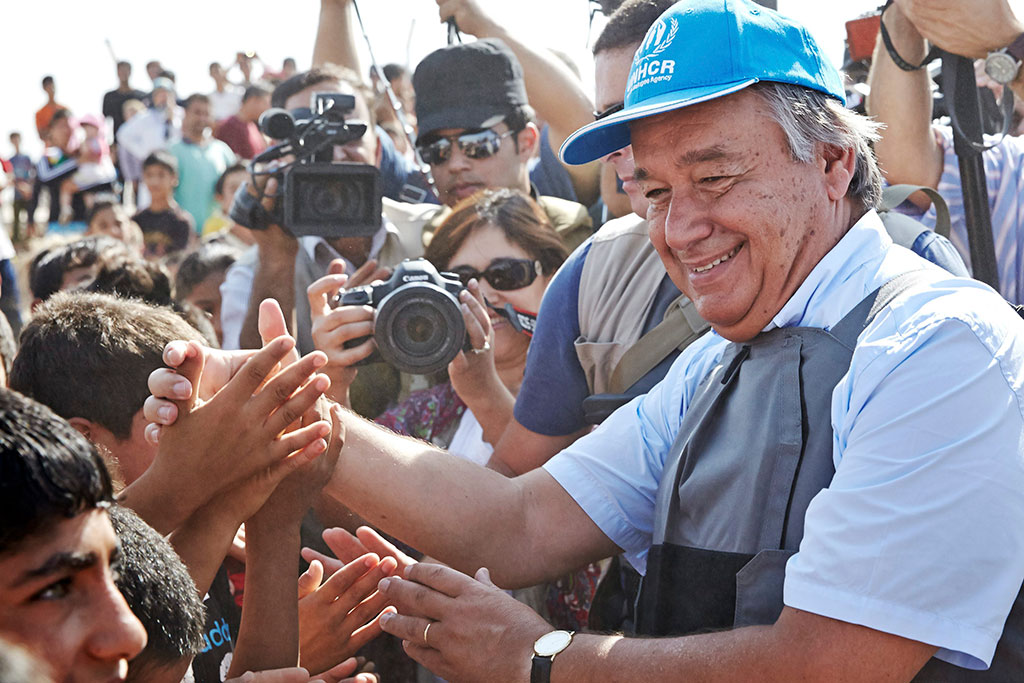 Amid a continuing exodus of Syrians into Iraq's Kurdistan region, Mr. Guterres praised the regional government for sheltering almost 200,000 people, including the more recent 47,000 arrivals. "This influx represents a huge strain on the economy and infrastructure here, and having a war next door is always a threat," recognized the UN refugee chief. UNHCR/S. Baldwin

UN News Centre: When you think about your new job, what are the main worries or challenges that come into mind?

UN Secretary-General-designate: I think that the main challenge at the present moment is to make sure that we are more effective in relation to the diplomacy for peace that I mentioned. But there are huge challenges in relation to the reform of the organization; to make it more effective and more able to deliver in relation to the people we care for all over the world.  And there are challenges to make sure that those important achievements that were possible in the recent past, thanks largely to the initiative of Secretary-General Ban Ki-moon, namely, the Agenda 2030 and the Climate Change Agreement, to make sure that those landmark decisions are effectively implemented, that there’s an effective follow-up. And then all the questions of making sure that human rights are assumed as a common responsibility of mankind and of all Member States.

UN News Centre: For the first time in the process of selecting a UN Secretary-General, we have seen several female candidates step forward and be considered. I’d like to ask about your thoughts on the role of women in senior positions.

UN Secretary-General-designate: First of all, I fully recognize the symbolic value of having a woman as Secretary-General of the United Nations, or as head of state in any country around the world. But there’s nothing I can do about it. I am not a woman, I am sorry. What I can do, is to make sure that for the Organization, first of all in everything we do around the world, the empowerment and protection of women and girls is a central priority, and second, that we are working inside the organization to reach parity between men and women at all levels in the nearest possible future. As I said, I cannot do anything about my gender, but I can have a very strong commitment to gender equality in everything related to the United Nations.

UN News Centre: So would you consider having a woman as your DSG?

The UN Secretary-General-designate, Antonio Guterres has pledged to make "a surge in diplomacy for peace" his priority. But as he prepares to take the mantle from Ban Ki-moon, the next UN chief told UN News Services that he wishes to continue the work that his predecessor had begun, especially implementing the 2030 Agenda for Sustainable Development and enforcing the Paris Agreement for Climate Change. He also acknowledges the challenges that lie ahead for him and the organisation, including reforming the organisation and a greater push for respect for human rights.

UN News Centre: You were the UN High Commissioner for Refugees for over 10 years. How will you use your expertise in this area in your new capacity as Secretary-General to address the needs of refugees and migrants?

UN Secretary-General-designate: I have to say that I was very worried in the recent past to see a serious deterioration of refugee protection in the world; and such high levels of hostility with populist and xenophobic approaches in relation to migration to many parts of the world. I hope that recent summits that happened in relation to refugees and migration would help change these trends, and I will do everything I can to reverse these trends, for refugee protection to be assumed as a global responsibility, as it is. And it’s not only the refugee convention. It’s deeply rooted in all cultures and all religions everywhere in the world. You see in Islam, you see in Christianity, you see in Africa, in different religions, in Buddhism and Hinduism, there is a strong commitment to refugee protection. So to make sure that countries are able to respect, not only international law, but to assume their full solidarity with those in need of protection that are fleeing those horrible conflicts that we are witnessing, will of course be a priority, but also to look into migration from a humane point of view, and recognizing that migration is part of the solution of global problems. It only needs to be effectively regulated. It only needs to be based on the cooperation among states, not to have people dying and at the same time those smugglers and traffickers or criminal gangs prospering because there is no effective cooperation between countries of origin, countries of transit, countries of destination, and migration is not considered as one of the natural elements in which the world solves its problems.

UN News Centre: The job of the UN Secretary-General has been described by many people as an impossible job. Now, how are you going to turn the impossible into the possible?

UN Secretary-General-designate: I’ll do my best. That’s the only thing I can tell. I’ll put everything I have in my capacity at the service of the noble cause and noble values of the UN and the UN Charter.