UN Photo/Rick Bajornas
Peter Thomson, President of the seventy-first session of the General Assembly, speaks to journalists, following the opening meeting of the session.

In his inaugural speech on 13 September 2016, he noted that this session will be special because his office will have the experience of working with two Secretaries-General: Ban Ki-moon, whose term ends on 31 December 2016, and Antonio Guterres, who was appointed by the UN General Assembly as his successor, on 13 October 2016.

Emerging from a busy period that saw him chair multiple high-level meetings – including the GA’s annual General Debate – Mr. Thomson spoke to the UN News Centre, describing what it was like being on the podium of the General Assembly Hall, where the annual Debate takes place.

Mr. Thomson: Well, this wasn’t the first time for me – I was a vice president back in 2011, and an acting PGA (President of the General Assembly) back then, so I had sat up there many times before. But it was just such a deep honour for my country really and the Pacific Island region, to find myself up there as the President of the General Assembly – the first time in history that that had been so for our region – so I was, I must say, proud from that point of view. 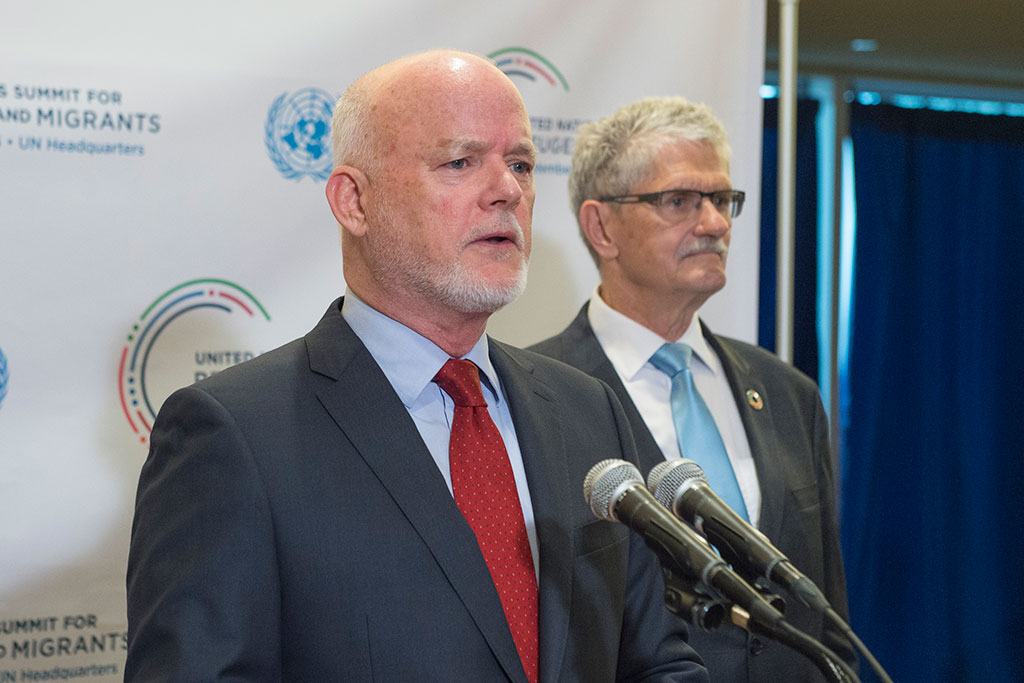 Peter Thomson (left), President of the seventy-first session of the General Assembly; and Mogens Lykketoft, President of the Assembly’s seventieth session, brief journalists prior to the opening of the Summit for Refugees and Migrant. UN Photo/Eskinder Debebe 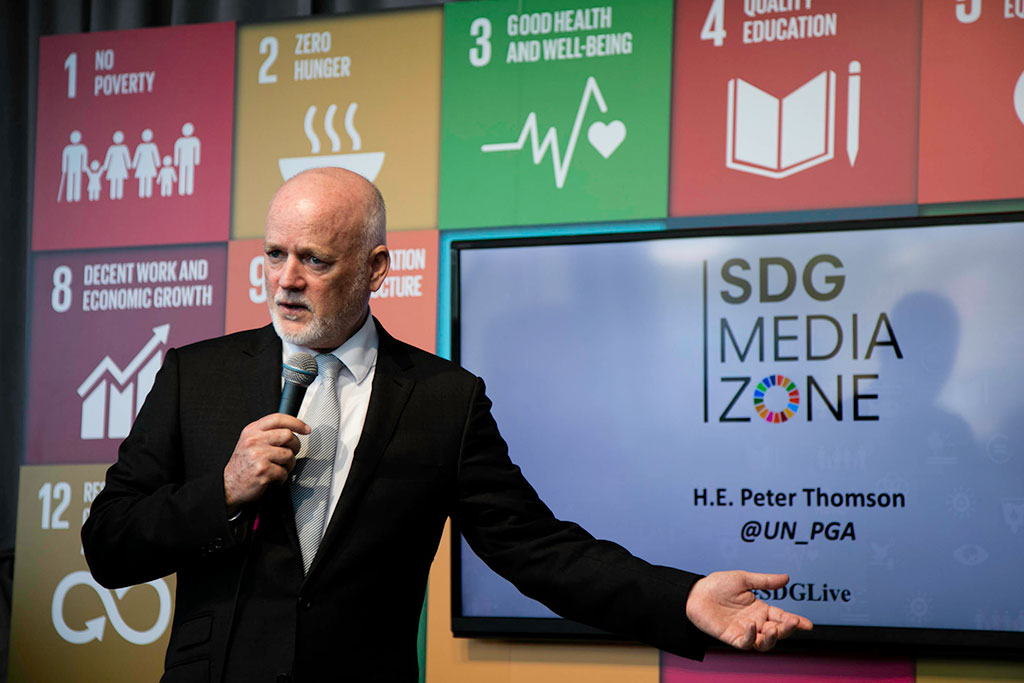 Peter Thomson visits the Sustainable Development Goals Media Zone set up at the Visitors’ Plaza of UN headquarters, during the general debate of the Assembly. 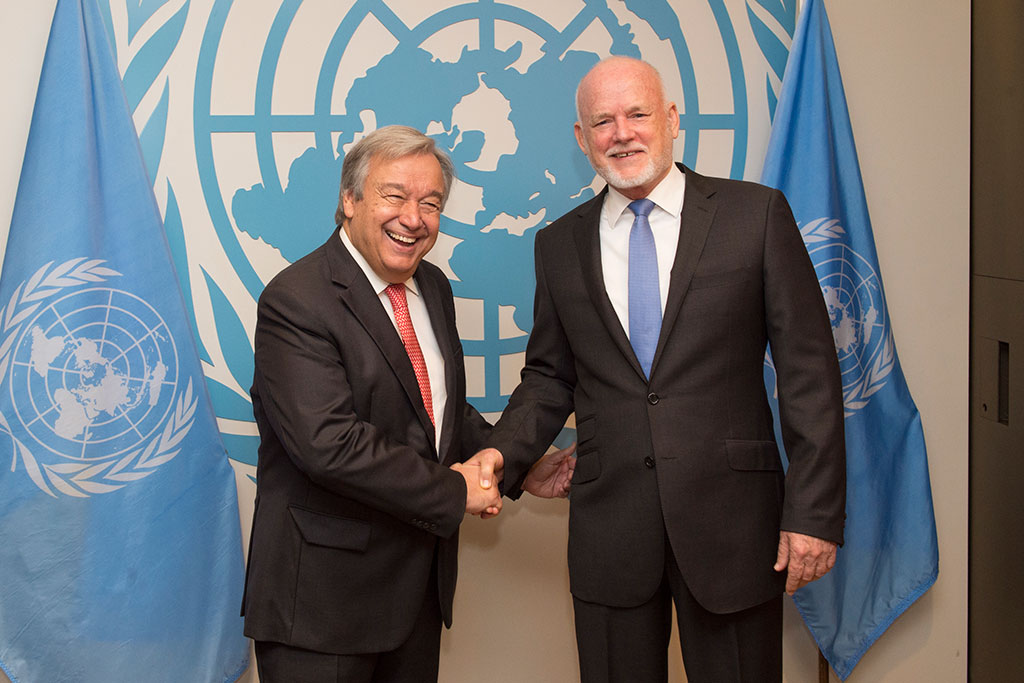 Peter Thomson meets with António Guterres, Secretary-General-designate. The General Assembly appointed Mr. Guterres by acclamation, to serve as the next Secretary-General of the United Nations.
< Previous Next >

UN News Centre: What were the highlights of the high level week for you?

Mr. Thomson: It is all something of a blur now. I can say that because I think I had something like 80 to 100 bilateral meetings with the heads of state or heads of government or ministers of foreign affairs, and made over 40 speeches – it’s something I am going to have to read at my leisure, I think, one of these days, but I don’t remember too much of it right now to tell you the truth.

UN News Centre: How is it possible for one person to juggle all of that?

Mr. Thomson: I think you have to build up to it and I’ve been here 6 1/2 years now, and presided over a lot of boards and chaired the G77 and such things. You have to not be awed by the situation; you have to know that there’s a process that must be properly managed.

UN News Centre: You’ve met some pretty high level diplomats and heads of state during this week, any highlights there?

Mr. Thomson: Well it was obviously a great privilege to meet President Obama on his last visit to the United Nations as president, and we had a 15-minute session together back in the greenroom behind here that will be memorable for me.

UN News Centre: What did he tell you?

UN News Centre: Was there any low points of the week?

Mr. Thomson: No, and to say that with such authority is because I’ve just written a letter to my team at the office and I’m seeing the Department of Conference Management this evening to congratulate both of them because it was seamless for me. I just basically went and did what I was told by them, and they just managed it superbly. 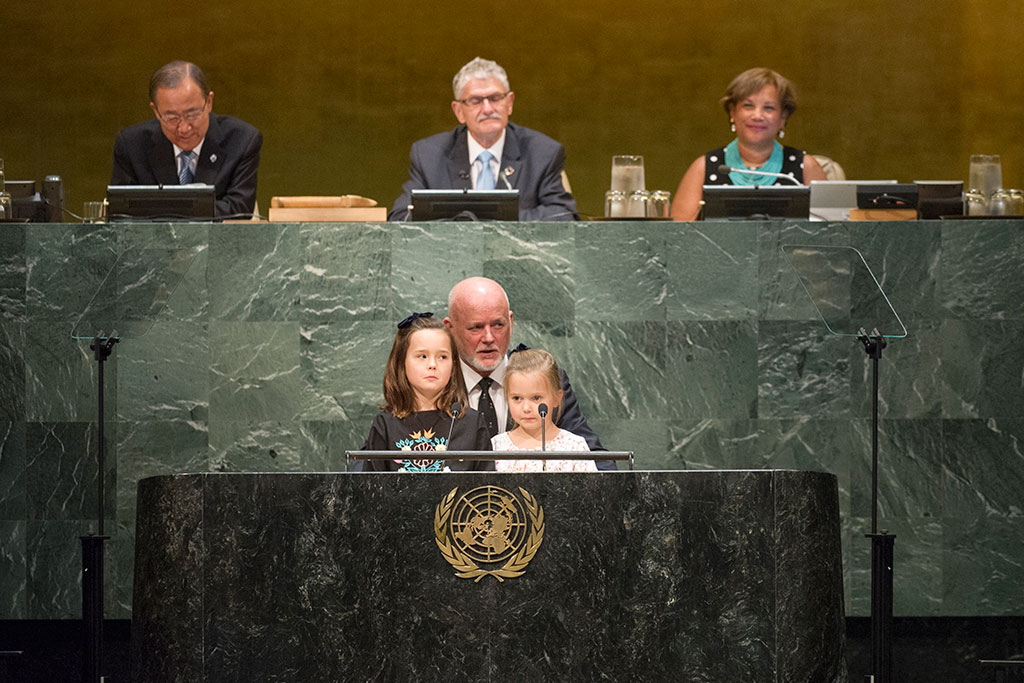 Peter Thomson flanked by his granddaughters Grace (left) and Mirabel), addresses the Assembly before taking the oath of office. UN Photo/Rick Bajornas

UN News Centre: And of course you had your two grandchildren here up on the podium, and that must have been quite an experience for them.

Mr. Thomson: Yes- they weren’t overawed by it; funny enough, I was on Skype with them saying, “How is it now that you’re back at home, everybody asking you about being up here?” And they were very nonchalant about it. My reason for getting (my grandchildren) up here was that I have the 2030 Sustainable Development Agenda at my heart, and I am very conscious of the fact when those grandchildren of mine get to the year 2030, they will be young adults. So, I wanted to make that point to everybody because everybody has either children coming or children now who will be in the same position, that the stakes are so high for them that we have to all be committed to the 17 Sustainable Development Goals, for their sake.

UN News Centre: Now you’re the man with the gavel – I think you had to use it several times to keep some of the rowdy delegates in line.

I have led with my chin and said that the 71st session and my leadership of it can be judged as a failure if we don’t have movement on all 17 goals.

Mr. Thomson: That partly comes from experience. I have observed over the years how the General debate, which is the high point of the United Nations’ year, when heads of state and heads of government come here from the 193 countries and debate amongst themselves the state of the world; I have observed over the years how there is not enough respect shown to the General Debate. Not only was there the rowdiness, which I think I controlled effectively this year, but there is the fact that the hall is often a quarter full, I would say – three-quarters empty – when a head of state is coming to make an address. It’s not good enough, and I want to address that in the 71st session: how we can show respect for the General Debate.

UN News Centre: What are you looking forward to in the coming months?

Mr. Thomson: The core of the work for me is the implementation of the 17 Sustainable Development Goals, and I have given my team – headed by Ambassador Williams of Grenada – the month of October to finalize our strategy and we will get rolling in November on how we can get the wheels turning on every one of the 17 Sustainable Development Goals, between now and the end of the session. I have led with my chin and said that the 71st session and my leadership of it can be judged as a failure if we don’t have movement on all 17 goals.

“The stakes are so high” for future generations, hence the need to commit to the success of the 2030 Agenda for Sustainable Development (SDGs). That is according to Peter Thomson, President of the 71st session of the UN General Assembly. In a recent interview, Mr. Thomson spoke about why he invited his two grand-daughters onto the stage at the commencement of this GA session, hoping to make a strong case for the 2030 Agenda.

UN News Centre: How will you measure that movement? What are you expecting?

Mr. Thomson: That is a very good question and it’s one that I will be able to give you the answer to in the end of October after the strategy is finished, because we are putting in place something measurable for each of the 17 goals.

UN News Centre: Your predecessor, Mogens Lykketoft, of Denmark, was very keen on transparency within the General Assembly, especially in the selection of the next Secretary-General, what’s your position on that?

Mr. Thomson: On transparency, I very much want to continue the level of transparency which he has exercised. I want it, by the end of the 71st session, to be just a way of doing business here at the United Nations. For example, I have had meetings with the president of the Security Council today, the president for October – which is Russia – and I’ve had a meeting with the president of the ECOSOC (Economic and Social Council) today. Now there will be summary memos of both those meetings; what we discussed, that will be circulated to all 193 missions.

UN News Centre: But for all the good intentions ultimately the PGA and the rest of the members actually are pretty powerless in terms of their inputs into the decision, aren’t they?

Mr. Thomson: I don’t think we are powerless, what has been demonstrated through the process this year is that the GA has an opinion on all these candidates. We have exposed their strengths and perhaps weaknesses through Q & A and we have had a very useful role to play in that regard. So I think we influence the process in a big way. And every Security Council member that I speak to has acknowledged that.

UN News Centre: So can you give me some of your highlights?

Mr. Thomson: Well, there were some very important meetings which took place apart from the General Debate, when you think of the high level meeting on refugees and migrants; the outcome of that – the New York declaration on refugee and migrants – was ground breaking. I really do think that we stepped up our humanitarian response to both the refugee and migrant category and we will be working on that in the 71st session, in preparation for what is going to happen in 2018 on the migrants compact. And also worthy of mention was the meeting on the right to development; very important for developing countries in particular; also the anti-microbial summit, where we would have to increase world awareness, given the fact that antibiotics will no longer be working in the near future, and we will have to have a new area of medical research as a result. So together with the fact that we had that very inspiring SDG moment at the beginning of the General Debate just to remind everybody what is at the core of our work going forward. My thanks to people like Richard Curtis who put that together and Andrea Bocelli for that fantastic spirit-lifting rendition of Nessun Dorma and to Forest Whitaker and his companion who walked us through the SDG videos; very inspiring stuff. And I hope that all will continue to be done at the beginning of every General Debate between now and the year 2030, to remind us all what our main task is. 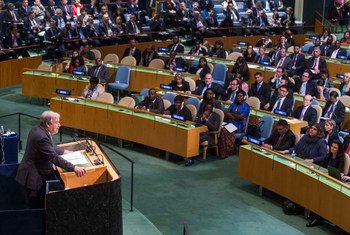 13 October 2016
The General Assembly today appointed by acclamation the former Prime Minister of Portugal, António Guterres, as the next United Nations Secretary-General, to succeed Ban Ki-moon when he steps down on 31 December.