UN Photo/Mark Garten
Aerial view of the dwindling ice on the summit of Mount Kilimanjaro.
19 October 2016

There is a need to reforest Africa’s highest mountain to help protect vital water supplies that are under threat across large parts of East Africa, a UN Environment report urged today.

The loss of Mount Kilimanjaro’s forests could trigger water crisis as rivers begin to dry up, notes the report, entitled Sustainable Mountain Development in East Africa in a Changing Climate, which was launched at the World Mountain Forum in Uganda today.

The report stresses that climate change has already destroyed 13,000 hectares of the mountain’s forests since 1976 – equivalent to cutting off a year’s supply of drinking water for one million people.

According to the UN Environment Programme (UNEP), Mt. Kilimanjaro’s forests are a vital source of water for the surrounding towns and the wider region. Water from the mountain feeds one of Tanzania’s largest rivers, the Pangani, providing food, fuel and building materials to much of East Africa.

The report notes that higher temperatures as a result of climate change have increased the number of wildfires on the mountain and thus accelerated the destruction of forests. Because there are now fewer trees to trap water from clouds, the annual amount of dew on the mountain is believed to have fallen by 25 per cent.

As an example of the dire impact of this situation, UNEP notes that the town of Moshi, which is located in the foothills of Kilimanjaro, is already experiencing severe water shortages as rivers begin to dry up, starving farmland of water in an area already struggling to cope with a dramatic drop in rainfall.

Protecting East Africa’s mountain ecosystems will also help safeguard the region’s vital tourism industry, which is worth $7 billion to East Africa. Mt. Kilimanjaro, for example, contributes over one third of Tanzania’s total revenue from tourism, the report adds. Furthermore, the disastrous impact of climate change on East Africa’s mountains can be seen in the loss of its glaciers. Since the 1990s, the surface area of glaciers in the region has decreased by 80. These glaciers are expected to vanish completely within a few decades as temperatures increase, notes the report.

According to the Intergovernmental Panel on Climate Change (IPCC), East Africa can expect an average increase in annual temperature of 3.2 degrees Celsius by 2080.

The mountains of East Africa are not only highly productive agricultural areas: the rivers they feed also have significant, but largely unexploited, hydropower potential for a region crippled by a lack of electricity.

Rivers in the Nile Basin, for example, could generate 20 gigawatts of electricity while the Mau Forest could generate a further 508 megawatts – enough to meet half of Kenya’s capacity.

The World Mountain Forum is taking place in Mbale, Uganda from 17-20 October under the theme ‘Mountains for our Future.’

Today’s report was co-authored by UNEP, GRID-Arendal, East African Community, the Albertine Rift Conservation Society and Nature-RIDD and is part of the Mountain Adaptation Outlook Series, which was launched by UNEP at the climate summit in Paris last year. 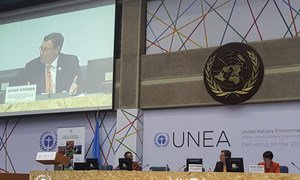