Hurricane Matthew, which ripped through Haiti 13 days ago, has left more than 700,000 people in an “extremely difficult situation,” United Nations Special Adviser David Nabarro said today, and while steady progress is being made, led by Haitians themselves, the response must be accelerated as the needs are still great, frustrations are high, and access to hard-hit areas remains tough.

Yet, even with so many people lacking food, water and healthcare in the south-western part of the tiny island nation where the Category 4 storm made landfall on 4 October, Dr. Nabarro told UN Radio today from Port-au-Prince that “so many excellent things are already happening […] as the people themselves are hard at work, readjusting their lives so they are protected from the elements.”

They are also gathering as much food as they can and “doing everything they can to be careful with the water they drink because they know that the water from the rivers and the brooks can give rise to cholera,” said Dr. Nabarro, who for the past two months has been helping design the UN system’s new approach to cholera in Haiti.

Another “positive” is the work being done by Haitian authorities, the Mayors, the officials in charge of different Departments, as well as the Civil Protection Department in Port-au-Prince. “But I have to say, this a really big challenge – a logistical challenge to get things to where they are needed because the roads are so heavily damaged and there’s a limit to what you can do with helicopters."

Dr. Nabarro went on to say that over the past four days he had seen that travelling in the interior of the country is still very difficult, and another key challenge is that there are people that are very frustrated in some areas.

“Anyone who’s been affected by this kind of mass tragedy is frustrated. They are also, in some cases, scared because of disease and hunger. So yes, there is a combination of frustration and fear,” he said, adding that at the same time, getting relief to such a large number of people in such challenging circumstances is “just very difficult.”

So, while there is a real willingness on the part of so many [relief workers] to help, “we have at the same time frustration on the part of ordinary people because they are not getting what they need.”

Having been in Les Cayes and Jérémie, two of the hardest hit areas, Dr. Nabarro said he has talked to health workers, people in shelters, people trying to get food and other assistance, “and the basic message is: ‘Please help us. We need food and we need help […] in a more timely way.’” Some of those he met “are, in a way, quite desperate for help, and so the job for everybody here, particularly now, is to spare no effort to get the best coordination on getting the basics that people need to where they are […] in an absolutely robust way.”

Dr. Nabarro said that the response must be carried out amid adequate security and communication with the public to reduce the threat of looting, which is making distribution “very difficult.”

As for the cholera situation in Haiti, he said: “Cholera is here. It stalks everybody.” Yet, the disease is treatable with solid recovery rates, provided people get to treatment centres. “We are seeing cholera cases everywhere we go. What we don’t know is how many cases there are that don’t get to the centres. This is why a more detailed study [of the situation in the] interior [of the country] is so important.” He said that he believed cholera and malnutrition are the “big risks” for the people of Hait “and we recognize that in everything we do.” 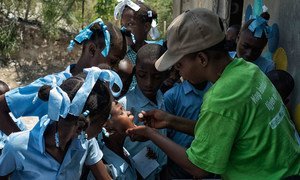