“It is one thing to read about the damage caused by the hurricane. It is another thing to see it for oneself,” Mr. Ban told reporters in the Haitian capital at the end of his mission to show solidarity with the people, many of whom had very little and now, he said, have lost everything in the aftermath of the powerful storm.

The Category 4 storm slammed into the island on 4 October and, according to UN relief wing, caused extensive flooding and mudslides, damage to road infrastructure and buildings, and electricity and water shortages, particularly in Haiti's south-western departments where it made landfall. The UN estimates that 546 have been killed, 438 injured, and 128 are missing, with some 2.1 million people affected throughout the country.

“Today, in Les Cayes, I saw utter devastation. I have heard from many victims. I have felt their pain. I understand their frustrations, even anger,” the Secretary-General stated, noting that some families have lost their homes, crops and livelihoods. “It is heartbreaking,” he said.

At the same time, Mr. Ban strongly condemned all attacks against humanitarian convoys, telling the press conference that he had witnessed such an attack today in Les Cayes where World Food Programme (WFP) trucks were attacked at the base of the UN Stabilization Mission in the country, known as MINUSTAH.

“Any attack against a humanitarian convoy is an attack against suffering, against those who are most needy. I understand the impatience and anger of the people waiting for emergency relief,” the Secretary-General stressed, adding: “We do our best to open roads and allow these help to arrive as quickly as possible.”

“But when [trucks carrying medicines] are attacked and looted, when food and water are plundered, this can only increase the distress of all and discourage international aid. I implore you: let the aid through,” he emphasized.

And while many might feel alone, Mr. Ban stated that while in Les Cayes, one of the hardest-hit areas along with Jérémie, he had said loudly and clearly: “The United Nations is with you. I am with you.” 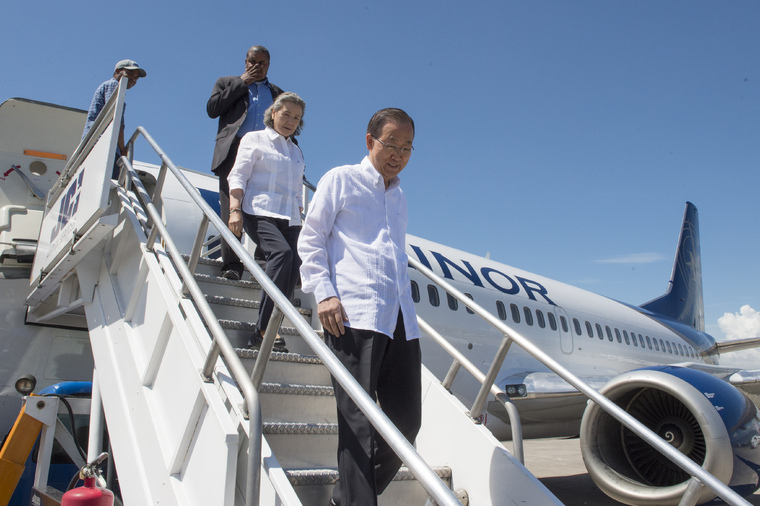 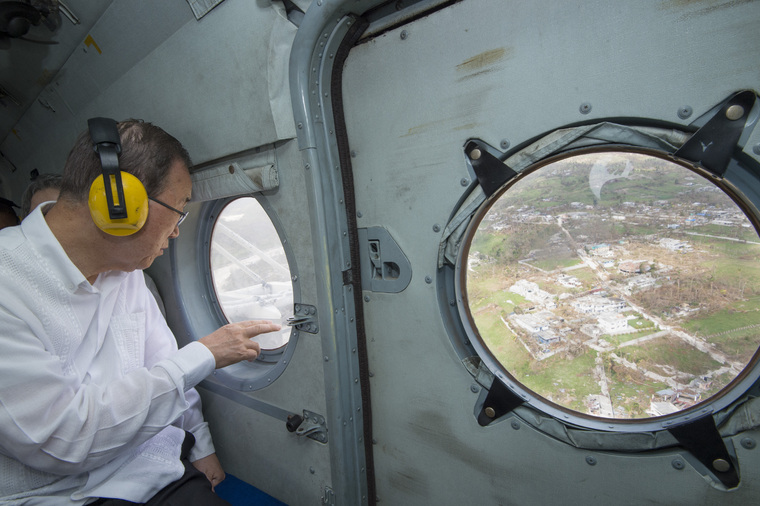 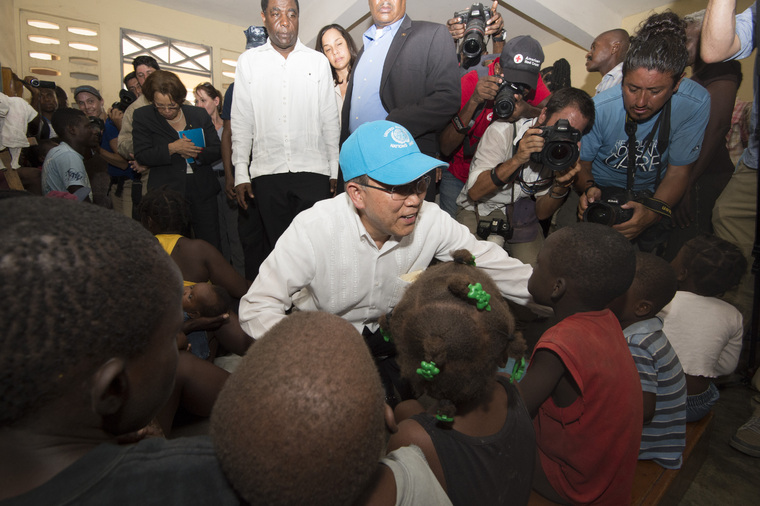 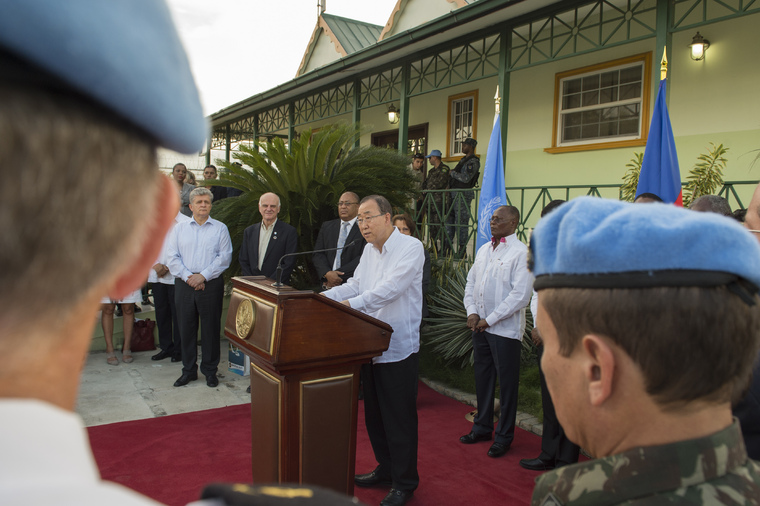 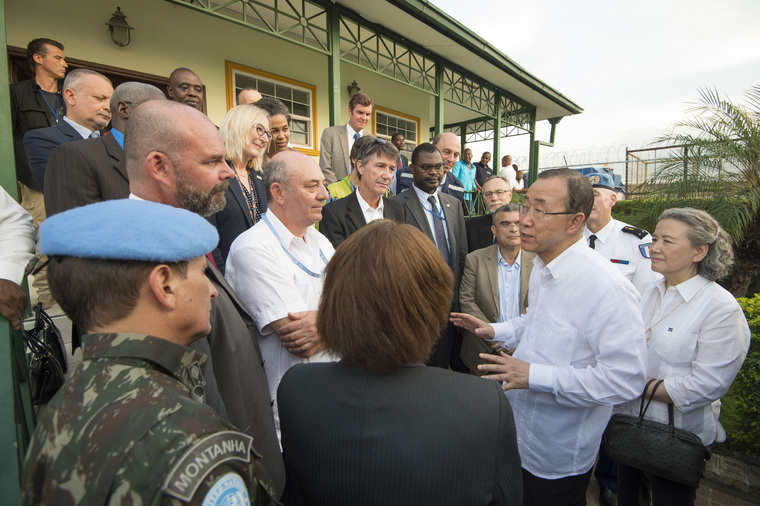 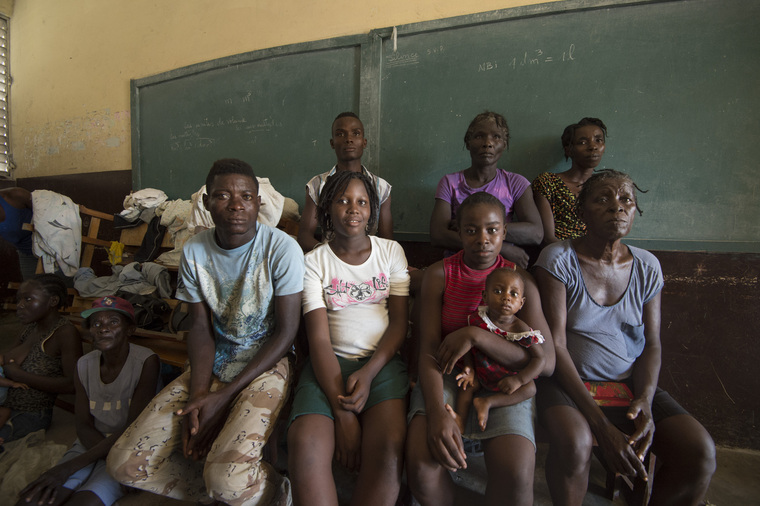 In the face of this humanitarian disaster, he recalled that just days after Hurricane Matthew hit, the UN launched an emergency appeal of $120 million dollars. “I urge all friends of Haiti around the world to step up and give. Provide the resources the people of Haiti so desperately need. This is a matter of life and death,” underscored the UN chief.

The so-called 'Flash Appeal,' launched by the UN on behalf of the international humanitarian community, seeks to respond to “the most urgent needs” of people impacted by the storm, now estimated to be some 750,000. According to the UN Office for the Coordination of Humanitarian Affairs (OCHA), the appeal targets vulnerable groups in identified priority sectors, and it takes into account the national-level capacities and those of humanitarian partners on the ground.

“The Hurricane upended people's lives. It also disrupted the elections,” continued the Secretary-General, stating that he is pleased the Provisional Electoral Council has announced new dates for the polls, with the first round to take place on 20 November.

“This shows the Government's commitment to a return to constitutional order despite the challenges faced by the hurricane,” he added.

Fight against cholera made even more difficult by hurricane

Turning to what he cited as another “vital challenge” made even more difficult by the hurricane – the fight against cholera, the Secretary-General said: “I deeply regret the loss of life and suffering. I wish it could have been avoided.”

Deeply regretting that the epidemic is continuing, “adding to the misery caused by the hurricane which has raised the risk of disease transmission,” he, announced: “The United Nations is intensifying actions on cholera. We are stepping up efforts to contain cholera and ensure all have access to clean water, sanitation and health systems.”

Just yesterday at UN Headquarters in New York, Deputy Secretary-General Jan Eliasson briefed Member States on the issue, saying the first track of the new UN approach to tackling cholera involves intensifying efforts to treat and eliminate the disease; and the second track aims to develop a framework proposal to Member States for material assistance to those Haitians most affected by cholera after the 2010 outbreak.

Mr. Ban said today that he is pressing the international community for support on both fronts. “We must fulfil our moral duty,” he underscored.

Concluding his remarks, the Secretary-General again pledged his full support and solidarity with the people of Haiti and pledged to “work hard to ensure that the world remembers – and acts.”

Secretary-General Ban Ki-moon today announced the launch of a near $120 million appeal to fund United Nations aid activities in the aftermath of Hurricane Matthew in Haiti, where the rising death toll coupled with the start of the rainy season has prompted the UN Children’s Fund (UNICEF) to sound the alarm on the threat of waterborne diseases to children living in the worst-affected areas.