A United Nations report released today documents the high incidence of rape in Liberia and the widespread impunity enjoyed by perpetrators, and provides a number of recommendations to the Government, other national and international stakeholders, including the UN, to urgently combat the scourge.

The recommendations include enhancing the fight against impunity through additional resources and capacities, including to the sex crimes prosecutor’s office, developing forensic investigation, harmonizing rape provisions in the penal code and enacting the Domestic Violence Act, which would make spousal rape a criminal offence.

The report, released by the UN Mission in Liberia (UNMIL) and the Office of the UN High Commissioner for Human Rights (OHCHR), is based on information gathered by UN human rights officers between January 2015 and March 2016.

It indicates a high number of rapes reported in all the 15 counties across the country, with 803 cases in 2015. “Rape is the second most commonly reported serious crime in Liberia,” the report says.

Liberia’s high incidence of rape is in part “a legacy of impunity arising from 14 years of civil conflict,” from which the country is still rebuilding, notes the report. According to the World Health Organization (WHO), “between 61.4 and 77.4 per cent of women and girls in Liberia were raped during the war.” Despite this, there has been no criminal accountability for perpetrators of war crimes in Liberia, including perpetrators of wartime sexual violence.

Impunity also prevails for recent rapes, with only two per cent of rapes and sexual and gender-based violence (SGBV) cases reported last year resulting in a conviction in court.

Rape victims do not achieve justice due to multiple challenges, including institutional weaknesses, corruption, lack of due diligence by government as well as logistical and financial constraints. “These combined factors have led to a widespread culture of impunity for SGBV, particularly for rape, putting women and children at continued serious risk of sexual violence,” says the report.Other barriers to victims reporting rape include undue influence by traditional actors, cultural and patriarchal attitudes, as well as gender stereotyping. A previous UN report published in December 2015, had already highlighted the widespread impunity for SGBV crimes in the context of Liberian traditional and cultural practices.

Social pressure to informally settle cases out of court is also a major obstacle to justice. “In the Liberian context, victims face challenges at every step of the process if they attempt to hold their assailants criminally accountable,” the report explains.

The vast majority of perpetrators of rape in Liberia are males over the age of 18 who are known to the victim. Most perpetrators are community members, and in some cases close relatives to the victim. “The shame of accusing a community or family member of rape prevented most victims from reporting the case,” the report notes.The report also says that close to 80 per cent of rape victims documented by the UN in Liberia in 2015 were under the age of 18, including at least five cases of girls under the age of five being raped. However, children are not necessarily disproportionately targeted, according to the report: “Child rape reports may be higher because they shock the conscience and are not preempted by the generally discriminatory attitudes towards women survivors of rape.”

Liberia is party to a number of international human rights treaties and instruments, under which it has the obligation to fight rape and gender-based violence. According to the report, the Liberian government’s inability, despite efforts made, to ensure criminal accountability for perpetrators of rape shows “that Liberia is not in compliance with its human rights obligations.”

UN human rights mechanisms had previously made recommendations. The report recommends that the Government implement these and encourages it to continue to seek technical assistance from international partners. 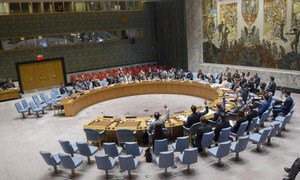 The Security Council this morning extended the mandate of the United Nations Mission in Liberia (UNMIL) through the end of the year, while reaffirming its readiness to consider withdrawing the operation and transitioning to a future UN presence there following a proposed mid-November review of situation on the ground in the country.