UN/MINUSTAH/Frederic Fath
US Marines unloading over 12 tonnes of food items from a World Food Programme (WFP) truck onto helicopters to be sent to Jeremie, Haiti, which was severely hit by Hurricane Matthew.
14 October 2016

United Nations relief agencies are continuing work on the ground to assist Haiti in the aftermath of powerful Hurricane Matthew with the World Food Program (WFP) today helping to provide supplies for some 750,000 people, while the UN health agency and its regional partner have appealed to donors for $9 million for emergency health operations.

“We are using trucks and helicopters to transport that food as quickly as possible to save lives,” stated Carlos Veloso, the WFP Representative in Haiti, in a news release, adding that the agency is working with the Government on identifying the most affected locations and providing essential aid.

WFP, which had nearly 3,450 metric tonnes of food supplies prepared even before the hurricane struck the island on 3 October, reported today that some 30,000 people, mostly living in shelters, have received the aid, including rations of rice, vegetable oil and salt.

In partnership with the Ministry of Agriculture, Natural and Rural Development, the National Coordination for Food Security and the UN Food and Agriculture Organization (FAO), WFP has also assessed five departments to evaluate the damage to the food and nutrition security of Haitians in the wake of the deadly storm.

According to Mr. Veloso, many people in Haiti are surviving by eating fruit from fallen trees. “What we are bringing to their families is nutritious food to help them rebuild their lives,” he said.

So far, WFP estimates that nearly 100 per cent of the crops have been destroyed in Haiti’s Grand’Anse department, while other departments have lost about 50 per cent of crops and fishing equipment, which was washed away in the storms torrential rains and heavy floods. According to WFP, Haiti’s Civil Protection Department is reporting that Hurricane Matthew killed over 470 people, and also caused extensive floods, damage to road infrastructure, and electricity and water shortages.

To support the Government, the UN and the wider humanitarian community in Haiti on Monday launched a $120 million appeal for food and life-saving support for the storm victims. WFP is also setting up a logistics group to facilitate storage space in Les Cayes and Jérémie to assist the emergency response of the entire humanitarian community.

Meanwhile, the Pan American Health Organization (PAHO) and World Health Organization (WHO) are assessing the health situation in Haiti, reporting that health facilities sustained severe damage, and vaccines and medications have been lost, and must be quickly replaced. The partner agencies estimate that $9 million in funding will be needed to carry out essential activities to tackle the damage.

Canada has already confirmed a contribution of 400,000 Canadian dollars towards emergency response, in addition to an earlier donation for cholera response, PAHO/WHO stated.

“Haiti is the second country in the Americas to establish this highly effective coordination mechanism that proved to be effective after the recent earthquake in Ecuador,” stated Dr. Ciro Ugarte, the Director of PAHO’s Health Emergencies Department.

He added that PAHO’s response has been substantial, with 35 team members supporting the Ministry of Health, field offices established in Les Cayes and Jérémie, and supplies and medicine sent to the field. 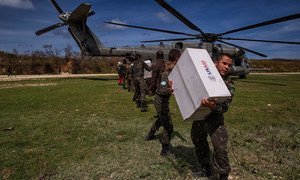 While Haiti is still counting its dead and assessing the damage in the aftermath of Hurricane Matthew, the powerful Category 4 storm that battered the tiny island nation last week, a senior United Nations peacekeeping official today reported that significant headway is being made clearing the roads to facilitate the movement of humanitarian aid.