One third of the Eastern European and Central Asian workforce performs precarious jobs that include informal and vulnerable jobs, while approximately $65 billion in illicit cash leaves the region annually, according to a new report launched today by the United Nations Development Programme (UNDP).

The report, called Progress at Risk finds that capturing even a small amount of the illicit funds that are leaving due to incorrectly invoiced foreign trade transactions would allow governments in Eastern Europe, Turkey and Central Asia to invest in job creation, expansion of social safety programs and close the gender gap.

The trend is a worrisome development particularly considering that the region has, until recently, enjoyed relatively equal distributions of wealth, broad access to social services and low gender disparities thanks to its socialist history. But signs indicate that these advantages are being lost, bringing the region more in line with others that are historically troubled by inequality.

“Many countries in this region used to enjoy relative job security, free and universal access to social services and smaller gender inequalities. But with vulnerability and exclusion on the rise, they are starting to resemble societies in other parts of the world,” said Cihan Sultanoglu, Director of UNDP’s Regional Bureau for Europe and the Commonwealth of Independent States (CIS), in a news release on the report’s launch earlier today in Brussels.

While an estimated 80 million out of a population of 230 million people have joined the middle class since 2001, the UNDP report has found that low commodity prices and slowing growth in the European Union and Russian Federation have made it difficult for many to find safe and stable employment or access even basic services such as health and education.

Women, migrant workers, youth and ethnic minorities such as the Roma face the greatest risk of falling behind. Despite the fact that women perform two and a half times more unpaid domestic labor, they are 30 per cent less likely to be gainfully employed than men.

A third of the working population in Eastern Europe, Turkey and Central Asia are in informal or vulnerable jobs, and social safety nets are increasingly coming under threat. Photo: UNDP

Moreover, a lack of access to basic social services such as healthcare has led to a rise in AIDS-related deaths; rates have tripled in the past 15 years in part because prevention and treatment services are not reaching the most marginalized groups. Yet, the report finds that official statistics do not always capture the ways in which these growing problems reflect discrimination and exclusion. It cites World Bank and Transparency International data that find a majority believe in the existence of a two-speed justice system and a third of respondents report having paid bribes for medical treatment.

UNDP says that halting the flow of illicit cash would help countries in the region implement the global development finance agenda that was agreed upon in Addis Ababa last summer. The agenda found that increases in domestic resources, including reductions in illicit financial flows, are crucial to funding sustainable development. A major concern in implementing the 2030 Agenda for Sustainable Development agreed upon by UN Member States last fall is the ability of nations to secure funds.

This report is coming at the right time. Many countries around the world are implementing the Sustainable Development Goals (SDGs), which recommend that no one be left behind,” said Ms. Sultanoglu. “If we can invest in bringing the most excluded and vulnerable groups up to speed, we will increase the prospects of reaching the SDGs in the region by 2030,” she added.

In addition to calling attention to growing inequality, the report encourages cutting the region’s high labor taxes in order to encourage more legitimate forms of employment. Such a move would secure workers’ rights and provide greater access to social protection. Furthermore, support for social care and domestic work would improve education, employment and earnings opportunities for women. UNDP asserts that this would accelerate economic growth and translate into higher levels of wellbeing for all people in the region.

Finally, the report calls for improvements to ensure that statistical offices are able to gather reliable and independent data on inequality so that governments can respond to the needs of vulnerable groups more effectively. It urges extensive public administration and civil service reforms in order to realize these goals. 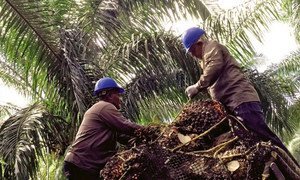 The global deficit in quality jobs and deteriorating economic conditions in a number of regions threatens to undo decades of progress in poverty reduction, warns a new report by the United Nations International Labour Organization (ILO).