Visiting Saudi Arabia, the United Nations humanitarian chief today met with key officials from defense and foreign ministries there to discuss the situation in the neighbouring war-torn country of Yemen.

“We all agreed that the utmost must be done to save and protect lives in Yemen in accordance with international humanitarian law,” Stephen O’Brien, the UN Under-Secretary-General for Humanitarian Affairs, told reporters in Riyadh, the Saudi capital.

According to a news release from his Office (OCHA), they also discussed ways to facilitate humanitarian access and the importance of relying on facts for impartial and neutral action.

Mr. O’Brien also met with Abdul Latif Al Zayani, the Secretary General of the Gulf Cooperation Council (GCC), to discuss the situation in Yemen and how they can mutually support efforts to alleviate the human suffering of the people there.

The UN humanitarian chief has also met with the President of Yemen, Abdrabuh Mansour Hadi, in Riyadh to discuss the deteriorating humanitarian crisis in his country and the need to ensure the protection of civilians as hostilities sadly continues and even intensify there.

Mr. O’Brien, who is also the UN Emergency Relief Coordinator, noted that the establishment of the King Salman Humanitarian Aid and Relief Center in 2015 has been a continuation of Saudi Arabia’s philanthropy to support people in need. “Its generosity has made a real impact in Yemen and elsewhere,” he said.

He and Abdullah Al Rabeeah, the Center’s Supervisor General, discussed how their two entities can better work together in a more complementary and efficient way.

“As in all humanitarian crises around the world, there is absolutely no time to waste. While the humanitarians will continue to provide aid to all those in need, there is an urgent need for a political, durable solution to the crisis beginning with a resumption of the cessation of hostilities,” Mr. O’Brien said.

Yemen has been engulfed in violence for several years now. A confrontation between the country’s Houthis (Ansar Allah) and the Government of Yemen in early 2014 led to a Houthi advance on the capital, and an ensuing conflict which has involved support from outside parties. The UN has been heavily involved in efforts to resolve the crisis.

While peace talks between a Yemeni Government delegation and a delegation of the General People’s Congress and Ansar Allah continued, serious violations have occurred in Marib, al Jawf, Taiz and in the border areas with Saudi Arabia. Those UN-facilitated talks ended on 6 August. 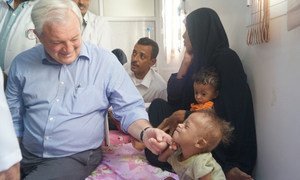