UN Photo/Manuel Elías
Special Advisor to the Secretary-General on the Prevention of Genocide Adama Dieng.
30 September 2016

The United Nations Special Adviser on the Prevention of Genocide, Adama Dieng, expressed alarm today at public comments by President Rodrigo Duterte of the Philippines, in which he reinforced a campaign to kill millions of drug addicts in the Philippines and compared it to the massacre of millions of Jews by Hitler during the Holocaust in Nazi Germany during the Second World War.

The Special Adviser qualified the comments as “deeply disrespectful of the right to life of all human beings,” said a statement issued by his Office.

Mr. Dieng reminded everyone that the Holocaust was “one of the darkest periods of the history of humankind and that any glorification of the cruel and criminal acts committed by those responsible was unacceptable and offensive,” the statement said.

He added that such comments were also undermining the efforts of the international community to develop strategies to prevent the recurrence of those crimes, to which all countries around the world should be committed to.

The Special Adviser also called on Mr. Duterte to exercise restraint in the use of language that could “exacerbate discrimination, hostility and violence and encourage the commission of criminal acts which, if widespread or systematic, could amount to crimes against humanity.”

Mr. Dieng also requested the President of the Philippines to support the investigation of the reported rise of killings in the context of the anti-crime and anti-drug campaign targeting drug dealers and users to ascertain the circumstances of each death, the statement said.

Last month, two UN-appointed human rights experts expressed concern about measures instituted in the country to crack down on drug offenders. More than 850 people have been killed since 10 May, when Mr. Duterte was elected President of the Philippines vowing to crackdown on crime. 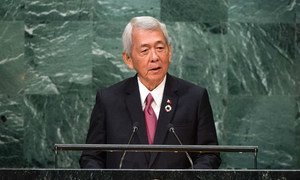 Addressing the United Nations General Assembly, the Philippines’ Foreign Minister today said that the country’s fight against corruption, illegal drugs and crimes under the new President has been widely misunderstood.