UN Photo/Manuel Elias
Victoria Tauli-Corpuz, Special Rapporteur on the rights of indigenous peoples, at a press briefing on indigenous peoples' collective rights to lands, territories and natural resources on 16 April 2018, at UN Headquarters in New York.
1 May 2019
Human Rights

False claims levelled at the UN expert on the rights of indigenous peoples by her own Government in the Philippines, “are without grounding in fact or law” and must cease immediately, said a statement issued by a group of her fellow experts on Wednesday.

In a joint statement, three UN Special Rapporteurs, or independent rights experts, said that “new accusations” against fellow rapporteur, Victoria Tauli-Corpuz, had been made by officials in the Government of President Rodrigo Duterte, “clearly in retaliation for her invaluable work defending the human rights of indigenous people worldwide”.

Government officials have accused Ms. Corpuz of being an affiliate of the Communist Party in the southeast Asian island archipelago, and it’s alleged “terrorist activities” there. On 13 March, the Deputy Chief of Staff for Civil-Military Operations, Brigadier General Antonio Parlade, alleged at a news conference in the capital Manila, that the UN itself had been “infiltrated by the Communist Party of the Philippines through Ms. Tauli-Corpuz", said the experts’ statement.

This was despite the decision of a court in Manila, dated 27 July last year, which in effect ordered the indigenous rights expert’s name be removed from a petition filed by the Department of Justice, which was then seeking to declare the Communist Party a terrorist organization.

Ms. Tauli-Corpuz, has been repeatedly targeted by the authorities, and accused of terrorism and alleged membership of the so-called New People’s Army. Last year, President Duterte’s spokesperson publicly accused the Rapporteur of seeking to embarrass the administration, according to the statement.

“The criminalising discourse used by Philippine public officials undermines the value of the vital work of human rights defenders, denigrates them in the eyes of the public and may put them at risk of threats, violence or other forms of harassment,” said the experts.

“We call on the Philippine Government to immediately stop these unacceptable attacks on the human rights work of Ms. Tauli-Corpuz, and to ensure her physical safety.”

In the fulfilment of her mandate, Ms. Tauli-Corpuz conducts fact-finding missions and reports on the human rights situation in specific countries, addresses cases of alleged violations of the rights of indigenous peoples through communications with Governments and others, promotes good practices and conducts thematic studies on topics of special importance to the promotion and protection of the rights of indigenous peoples.

She is an indigenous leader from the Kankana-ey Igorot people of the Cordillera Region in the Philippines. As an indigenous activist, she has worked for over three decades on building movements among indigenous peoples and as an advocate for women's rights, and is a former Chair of the UN Permanent Forum on Indigenous Issues.

Last year, UN News spoke to her about her life and work, for our podcast series, UN Gender Focus:

♦ Receive daily updates directly in your inbox - Subscribe here to a topic.
♦ Download the UN News app for your iOS or Android devices.
philippines|human rights|Indigenous Peoples 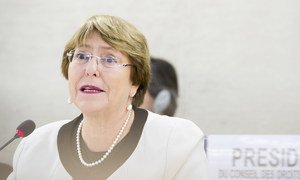 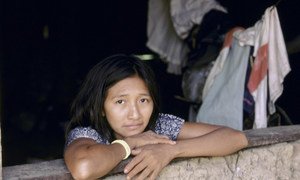 Progress that destroys traditional culture, language, land and human heritage “is not development, but willful destruction”, the UN Deputy High Commissioner for Human Rights said on Wednesday, in defence of indigenous peoples everywhere.