OCHA/Tilak Pokharel
At the Bandeu checkpoint in Nepal, inspectors and a police constable approach a bus to look for potential victims of child trafficking onboard.
29 September 2016

With current armed conflicts and humanitarian crises driving massive population movements – and not just in Europe, though the continent has been heavily challenged – an upcoming United Nations report will confirm the troubling fact that human trafficking generally follows the overall migratory flows, a senior UN anti-crime official said today, urging States to back the Trafficking in Persons Protocol and other international tools to address the evolving and complex situation.

John Brandolino, Director of the Division for Treaty Affairs at the UN Office on Drugs and Crime (UNODC), spotlighted the importance of international treaties and agreements in tackling human trafficking in his address to a Headquarters event co-hosted with the European Union (EU) following up last week’s first-ever UN Summit for Refugees and Migrants.

“The forthcoming biennial 2016 UNODC Global Report on Trafficking in Persons, which will be released in November, confirms that human trafficking flows generally follow the overall migratory flows, he said, adding that the majority of trafficking victims detected globally by Member States (around 60 per cent) are foreigners in the country of detection, most of them migrants.

Likewise, information collected for the Global Report has shown an increasing detection of victims from conflict-affected countries such as Syria, Iraq and Somalia in countries in Europe, Asia and the Middle East.

The continuing vulnerability of women and children as victims of trafficking in persons will also be revealed in the Global Report, comprising 79 per cent of the total victims detected. The EU Anti-Trafficking Coordinator’s Progress Report from June of this year came to the same conclusion, highlighting the particular vulnerability of migrant children, he added.

Further, EU data confirms that child trafficking is exacerbated by the ongoing migration crisis, during which the number of children arriving in the EU has risen exponentially. A significant amount of these children are travelling unaccompanied, making them preferred targets for traffickers.

A young woman from a fishing community in West Bengal in eastern India. She comes from a village that is known for high levels of trafficking of women and girls to other major cities. Photo: UN Women/Anindit Roy-Chowdhury

With these challenges in mind, Mr. Brandolino said that for him, two core messages stand out in the Summit’s outcome, the New York Declaration: first, a desire to protect and save lives in peril, born from a profound solidarity for the millions of persons around the world who are forced to flee their homes; and second, moving beyond moral compassion, to a call for action. In the Declaration, States reiterate in the strongest language their commitment to fight human trafficking and migrant smuggling.He went on to reconfirm the centrality of the Protocol to Prevent, Suppress and Punish Trafficking in Persons, known as the TIP Protocol, saying: “This treaty provides us with the first and only internationally agreed upon definition for trafficking in persons, and steers our common efforts with a clear framework for action – a framework which UNODC has been successfully delivering upon for the last 15 years, often with the generous support of partners like the EU and the United States.”

The New York Declaration actually reaffirms the importance of the UN Convention against Transnational Organized Crime, and the two Protocols – the Trafficking in Persons Protocol and the Smuggling of Migrants Protocol. Specifically the TIP is one of the most successful treaties in modern international law, enjoying one of the speediest ratification trajectories ever, and soon approaching universality, he said, noting that as of today, there are 170 ratifications, or nearly 90 per cent of all Member States, including most recently, the Republic of Korea, Singapore and the Maldives.

Mr. Brandolino noted that UNODC is also facilitating direct support to victims of trafficking in persons through the UN Voluntary Trust Fund for Victims of Trafficking in Persons, Especially Women and Children, and that around 2,000 victims a year are being provided critical assistance, such as safe shelter, legal support and advice on victims’ rights, appropriate treatment for physical and mental abuse, vocational training, establishing small businesses, schooling for children, and basic health services, among others.

“The Trust Fund has so far allocated nearly $3 million and stands ready to continue this work should more donations be made,” he added.

Wrapping up his presentation, he said “commitment yields results,” and “the Trafficking in Persons Protocol is the cornerstone of our response and should continue to be so. More than 15 years on, this hard-won instrument appeals to nearly all States while containing progressive, forward-looking provisions which promote the protection of victims. 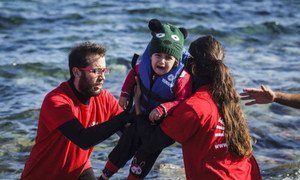