UK Ministry of Defence
At a ceremony in London, the UK Minister of State at the Foreign and Commonwealth Office, Baroness Joyce Anelay, presents Major Aichatou Ousmane Issak of Niger with the inaugural Military Gender Advocate of the Year Award for her work in integrating gender perspectives into peacekeeping activities.
7 September 2016

A former United Nations peacekeeper from Niger has been presented with the inaugural UN Military Gender Advocate of the Year Award for her work in integrating gender perspectives into peacekeeping activities while serving in Mali.

“I am filled with a real sense of pleasure and satisfaction today. I am most grateful to the UN, and to the Government of Niger who deployed me as military staff, and I am also very happy in the name of all women,” Major Aichatou Ousmane Issak said in a telephone interview with the UN News Centre from London, where the United Kingdom’s Minister of State at the Foreign and Commonwealth Office, Baroness Joyce Anelay, presented her with the award on Wednesday evening.

The UN Military Gender Advocate of the Year Award recognises the dedication and effort of an individual peacekeeper in promoting the principles contained within the UN Security Council’s resolution 1325, aimed at drawing attention to women in armed conflict and their role in peacekeeping and security.

Adopted in 2000, the resolution stresses the importance of women’s equal and full participation as active agents in the prevention and resolution of conflicts, peace-building and peacekeeping. It calls on UN Member States to ensure women’s equal participation and full involvement in all efforts for the maintenance and promotion of peace and security, and urges all actors to increase the participation of women and incorporate gender perspective in all areas of peace building.

Nine peacekeeping missions nominated peacekeepers to be considered for the award and were graded on how they integrated the principles of resolution 1325 into military functional areas.

According to the UN Department of Peacekeeping Operations, Major Issak – then serving at the rank of captain – stood out for her work with the UN Multidimensional Integrated Stabilization Mission in Mali (MINUSMA), particularly in the eastern region of Gao, where she served in a civilian-military cooperation unit.

While there, she developed quick impact projects that aided the local population, accompanied what would have been all-male patrols thus making them more approachable and accessible to local women and children, and spent considerable time and effort training fellow staff officers and reaching out to women in the local community.

“As you know we bring something different than men, a different vision – I think as a woman I brought a different perspective in the peace process and some ideas that helped make decisions,” Major Issak said.

“Making women part of the patrols is important because on certain terrains of operation it is difficult to get certain information,” the 42-year-old mother of three added. “In the specific case of Gao, it is important for women to partake in patrols because in the Muslim religion men do not have access to homes but with women access to households is easy, so you can identify what the needs are and then report them to the hierarchy and then help the population.”

Major Issak’s award comes a day ahead of the UN Peacekeeping Defence Ministerial taking place in London on Thursday. Hosted by the Government of the United Kingdom, the gathering is a follow-on event to the Leaders’ Summit on Peacekeeping hosted by Secretary-General Ban Ki-moon and US President Barack Obama last year.

During the Ministerial, Defence Ministers will review progress on the implementation of last September's pledges and announce new commitments, develop a shared plan for how peacekeeping can help implement the women, peace and security agenda and focus on operationalising pledges through better training, force generation, pre-deployment processes, doctrine, equipment, leadership, performance, lessons learned mechanisms and rapid response capability. The Ministerial will also discuss how to prevent and respond to sexual exploitation and abuse allegations.

Those attending include the Under-Secretaries-General for Peacekeeping Operations and Fiedl Support, Hervé Ladsous and Atul Khare, as well as the Special Coordinator on improving the UN response to sexual exploitation and abuse, Jane Holl Lute and other peacekeeping officials. 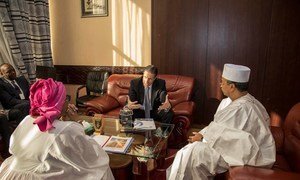 “In the talk about peacebuilding and reconciliation, we sometimes forget that it’s about how local communities come back together,” said the United Nations Assistant-Secretary-General for Peacebuilding Support, Oscar Fernandez-Taranco, discussing the UN’s Peacebuilding Fund – which supports millions of people in 27 countries.