Head of MINUSMA Mahamat Saleh Annadif receives Oscar Fernandez-Taranco, Assistant Secretary-General for Peacebuilding Support while visiting Mali. During the visit, Fernandez-Taranco will seize the opportunity to consult with the Malian authorities on United Nations support to national and international efforts to consolidate peace.

“In the talk about peacebuilding and reconciliation, we sometimes forget that it’s about how local communities come back together,” said the United Nations Assistant-Secretary-General for Peacebuilding Support, Oscar Fernandez-Taranco, discussing the UN’s Peacebuilding Fund – which supports millions of people in 27 countries.

In March of this year, Mr. Fernandez-Taranco visited Mali. The country’s Government, with the support of the UN Multidimensional Integrated Stabilization Mission in Mali (MINUSMA), has been seeking to restore stability and help to rebuild social cohesion following a series of setbacks since early 2012, including a military coup d’état, and renewed fighting between Government forces and Tuareg rebels. A number of UN peacekeepers have also been killed in the country in recent months.

Mali – which was once a center of trade and learning, famous for towns such as Timbouktou, and praised for its tolerance and inclusivity – became highly polarized during the latest conflicts. One of the UN aims in Mali is to re-establish trust between the various religious, ethnic, regional, economic communities.

In addition to creating space for different groups to come together, the UN is helping them to readjust economically – particularly people who had been displaced by the fighting.

UN Peacebuilding Fund. At least $300 million needed. More than $600 million already invested in 25 countries. The UN News Centre's latest feature series looks at how UN Peacebuilding is helping millions of men, women and children around the world rebuild their countries

“To see the ravages of war…”

Balkissa Issoufi, lost all her resources during the conflict, but remains responsible for herself and seven dependents.

She had a very difficult time getting by until the UN supported her through some seed money that allowed her to sell condiments in a small neighbourhood market during the day and in a store in the evening.

“This assistance allows me to meet all the expenses of the family and I am saving,” Ms. Issoufi told in French to a MINUSMA public information officer.

Ms. Issoufi is among the group of young people, women’s groups and internally displaced persons with whom Mr. Fernandez-Taranco met while in Mali, to discuss programmes financed by the UN Peacebuilding Fund – which is a specific funding mechanism within the UN that support countries emerging from conflict – the third pillar of a platform that includes the Peacebuilding Commission and the Peacebuilding Support Office.

“To see the ravages of war and to see the importance of helping a country knit together all these different communities that have been split apart by conflict in a way where local communities are able to stress their priorities – I was very, very moved,” Mr. Fernandez-Taranco told the UN News Centre, adding that the people were all from communities “occupied by extremist groups which were then “liberated” by the peacekeeping mission.

Since 2013, the Peacebuilding Fund has allocated $12 million to immediate response activities in the regions of Gao, Timbouktou, for delivery of basic services and creation of employment opportunities, as well as gender-based violence. 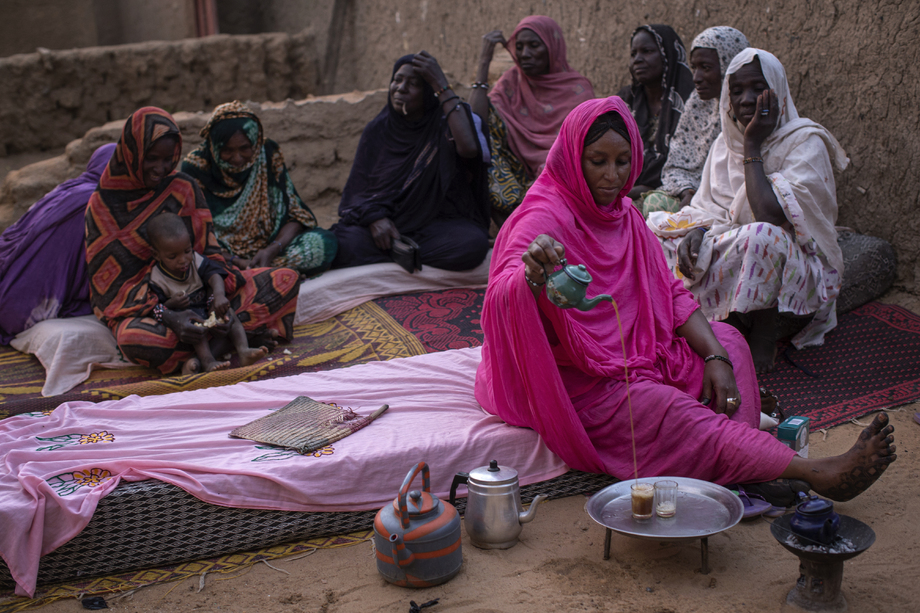 Women from the Songhai and Bella ethnic groups share a moment of relaxation, drinking tea in Gao, Mali. Different ethnic groups regularly work and socialize together in the Gao region, showing that peaceful co-existence and reconciliation in Mali is possible.UN Photo/Marco Dormino 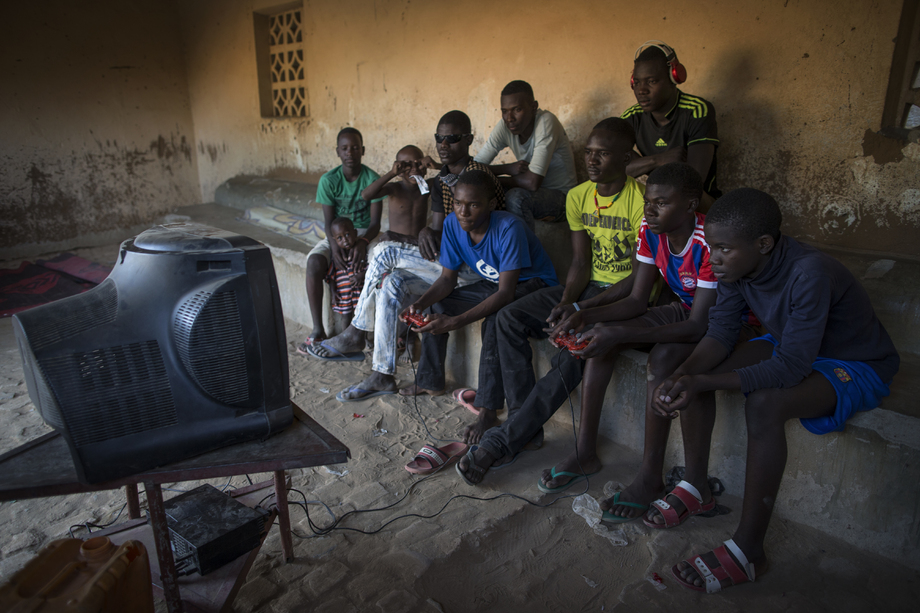 According to the most recent data from the World Bank, dating back to 2012, just over 20 procent of the Malian population has access to electricity. World leaders, when signing the Sustainable Development Goal pledged to ensure access to affordable, reliable, sustainable and modern energy for all. UN Photo/Marco Dormino 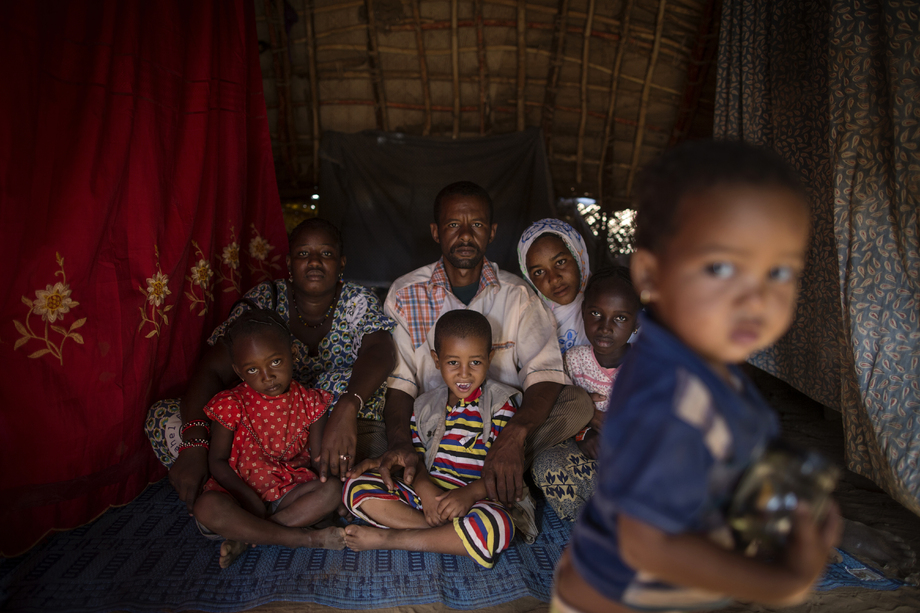 Data from the Population Division shows that the crude birth rate in Mali, compared to other Western African countries, is relatively high and projected at 41 per 1000 living Malian people for the period 2015-2020. Malian families are generally larger, like the family sitting in a their tent. UN Photo/Marco Dormino 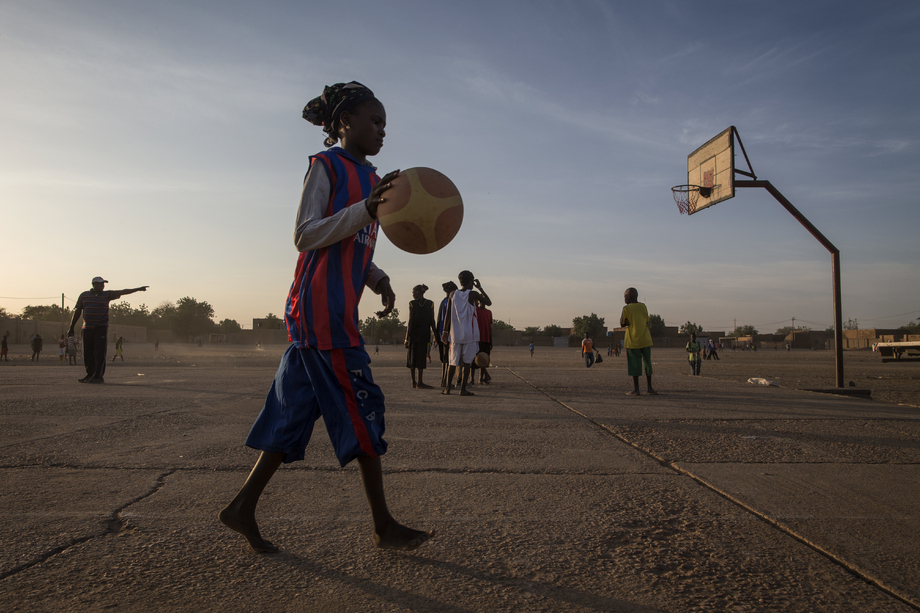 Although football is the most popular sport in the Western African country, Malian women compete for a top 5 place in the African Championship for Basketball. In 2008, Mali send a female basketball team to the Beijing Summer Olympic Games.UN Photo/Marco Dormino

For example, seed money from the Fund also created three cantonment sites for some 3,500 combatants. In addition, the UN Development Programme (UNDP) and the UN Industrial Development Organization (UNIDO) received support to train youth and women – such as Ms. Issoufi – so they could support themselves in the local markets.

Other funding created 10,000 radio ads which led to nearly 500 victims of sexual violence to find access to safe havens, treatment and a place to talk with each other, crossing ethnic divides. While, almost 4,000 children – half of them girls – went back to school to make up for four years of missed education and participated with their parents in programs fostering peace and unity.

Seeing the impact of the Fund in action and its ability to unite various UN entities is part of the “uniqueness of the work in peacebuilding which is very difficult to explain,” said Mr. Fernandez-Taranco.

“It’s basically about bringing the United Nations together to deliver as one very coherently and to integrate political issues, development issues, human rights issues and also make the interlinkages to the ongoing work in terms of humanitarian response and peacekeeping response to local communities,” he summarized.

Hamada Adama Toure was in Gao when the crisis began, but had been moved by international organizations from the capital, Bamako, and was even a refugee in Libya and Tunisia.

“Once the crisis broke out, things became very difficult for me,” he told MINUSMA in French. “I started to trade with the means at hand but it did not work well.”

Mr. Toure received 350,000 Central African CFA Franc, the equivalent of about $600, through a programme supported by the Peacebuilding Fund. This allowed him to buy goods for his shop – which he now replenishes through a daily revenue stream of between 25,000 and 40,000 CFA francs.

This has allowed him to feed all 10 people in his family, including four orphans under his care.

The Peacebuilding Fund was launched by the Secretary General in 2006 for activities, actions, programmes and organizations supporting sustainable peace. Overall management for the Fund is with the Peacebuilding Support Office, which among other responsibilities, approves projects and programs and monitors implementation. The UNDP’s Multi Partner Trust Fund Office administers the Fund. An independent advisory board provides advice and oversight.

Mr. Fernandez-Taranco, who heads the Peacebuilding Support Office, describes the Fund as “risk-tolerant pooled funding mechanism where donors have been contributing very generously over the past years.”

Given the number of projects launched by the Fund, and the number of ongoing conflicts around the world, however, the supply of funds have not kept track with the needs. The Fund currently has requests for more than $130 million worth of programmes but only about $60 million left in the account. 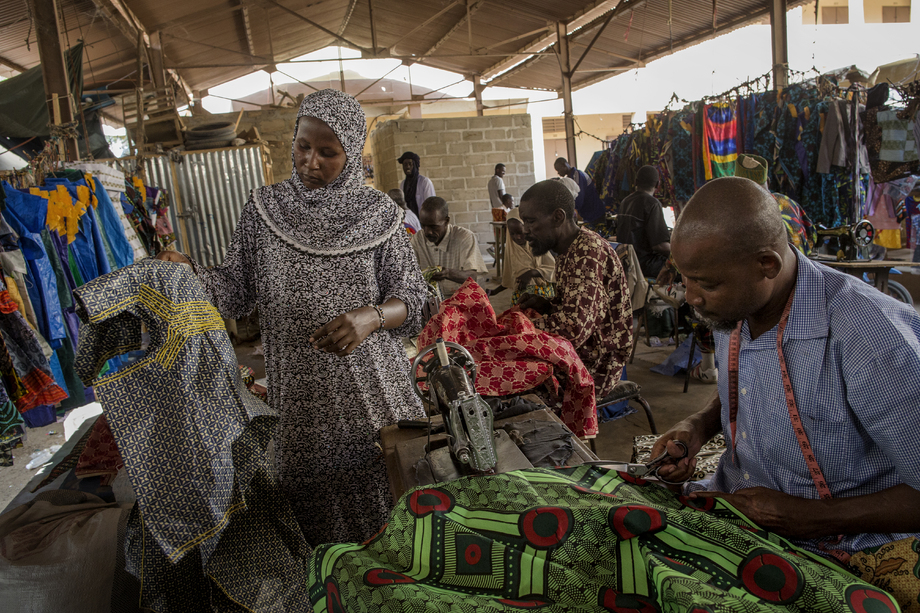 A woman speaks to a tailor at a market in Gao, Mali. During the Jihadist occupation, women were forbidden to speak with men in public. With the return of peace to the region, the atmosphere has improved and Gao's businesses have started to reopen. UN Photo/Marco Dormino 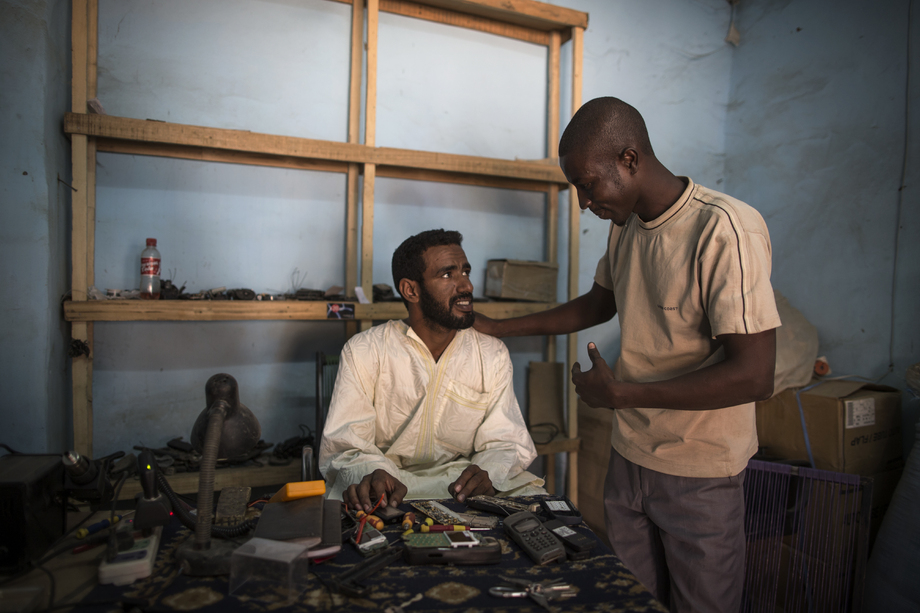 Two friends and store owners from different ethnic groups (Songhai and Arab) chat at a cell phone store in Gao, Mali. Different ethnic groups regularly work and socialize together in Gao, showing that peaceful co-existence and reconciliation in Mali is possible, and with peace having returned to the region, businesses have started to reopen as well. UN Photo/Marco Dormino 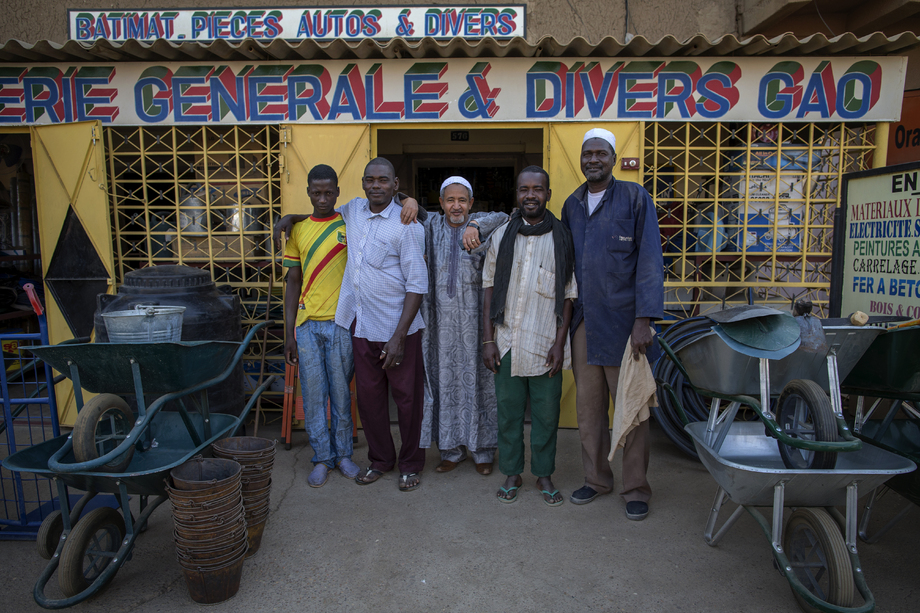 An Arab hardware store owner (centre) poses for a photo with his employees from the Songhai and Bella ethnic groups outside his store in Gao, Mali. The owner was forced to shut his business down and to leave the country during the Jihadist occupation, but the store was reopened by his employees in August 2013, prior to his return. With the return of peace to the region, more of Gao's stores have reopened and multi-ethnic businesses such as this show that peaceful coexistence and reconciliation in Mali is possible. UN Photo/Marco Dormino 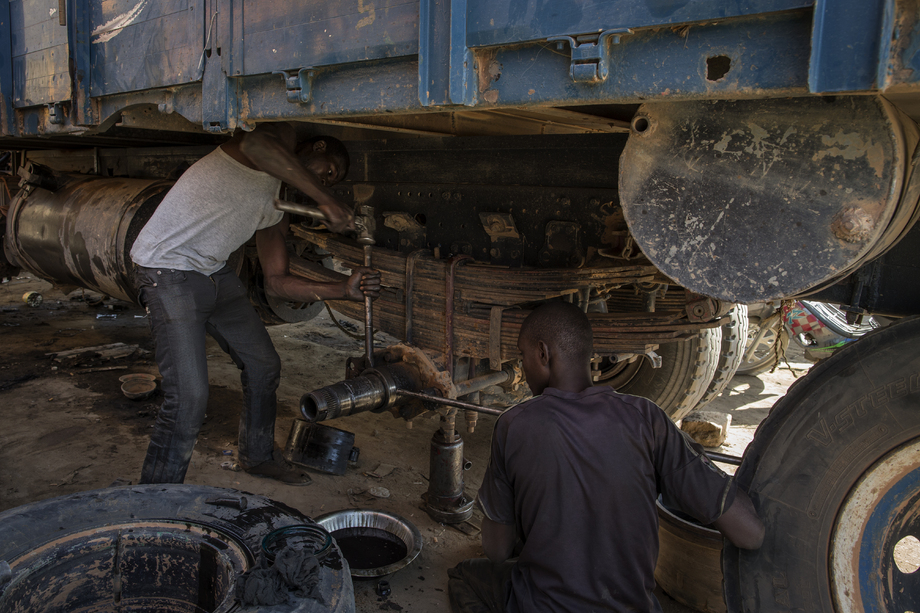 Employees from different ethnic groups repair a truck part at a garage in Gao, Mali. Different ethnic groups regularly work and socialize together in Gao, showing that peaceful co-existence and reconciliation in Mali is possible, and with peace having returned to the region, businesses have started to reopen as well.UN Photo/Marco Dormino

This September, on the sidelines of the General Assembly high-level debate, top donor contributors and recipient States will hold a pledging conference, under the stewardship of the United Kingdom, Sweden and Kenya.

“We are hoping to raise $300 million,” Mr. Fernandez-Taranco said, allowing the Fund to disperse a target of $100 million per year.

The international community and all recent reviews of UN’s peacebuilding work support  the need for “predictable and flexible,” the senior UN official said. This means that money can be allocated very quickly for activities like political dialogue, preventing violence in electoral process, supporting women and youth initiatives, bringing reconciliation, supporting transitional justice mechanism, and demobilization efforts of peacekeeping and political missions.

“We really make a difference when we work together seamlessly across the different strands or pillars of the UN,” noted Mr. Fernandez-Taranco. “When it comes to conflicts, every given country, every society, every community is unique and requires the power of our analysis and ability to be engaged with Governments, communities – with young people, with women – to come up with their own solutions and for us to support them building sustained peace over time.”

This is the second story in our series on UN peacebuilding. Check back with us later this month as we look at how the Peacebuilding Fund is being used in Madagascar. 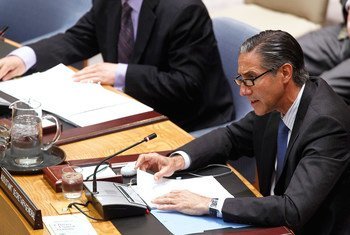