They both were visiting the southeastern city of Hangzhou in China to attend the G20 summit starting tomorrow.

The Secretary-General reiterated the support and solidarity of the UN with the Government and people of Turkey, following the 15 July coup attempt, according to a readout issued by Mr. Ban's office.

The Secretary-General “has been inspired by the strong commitment demonstrated by the Turkish people after these events, and stressed the importance to harness this energy and solidarity to build an even more solid foundation for future development and good governance in the country,” the readout said.

According to the readout, the Secretary-General and the President also discussed the situation in Syria, particularly in Aleppo, as well as the status of negotiations for a political solution to the conflict and the recent report of the OPCW-UN Joint Investigative Mechanism on chemical weapons attacks in the country.

“The Secretary-General emphasized the key role of Turkey in the fight against Da'esh,” it said.

On climate change, the Secretary-General noted the leading role Turkey had played during its presidency of the G20 last year in Antalya, and hoped Turkey will ratify the Paris Agreement before the end of the year, possibly during the High-level event he is convening on 21 September in New York, the readout stated. 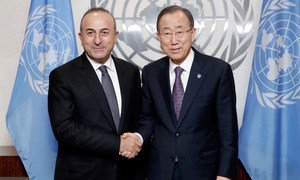 In a telephone call with the Turkish Foreign Minister today, United Nations Secretary-General Ban Ki-moon sought an update on current investigations and measures to hold those responsible for the attempted coup to account, and reiterated his expectation that Turkey adhere to its international human rights obligations.