UN Photo
A delegation from the United Nations Security Council visits a camp for the internally displaced persons in Juba, South Sudan on 3 September 2016.
3 September 2016

On the second day of its visit to South Sudan, a delegation from the United Nations Security Council today met with displaced people living in camps, known as “protection of civilians” sites, seeing first-hand “the human consequences of the failure of political leaders to bring peace back to their country.”

“We heard desperate appeals for the Regional Protection Force to be deployed quickly,” United States Ambassador Samantha Power told reporters, referring to the 4,000-strong force approved in a Security Council resolution that also renewed the mandate of the UN Mission in South Sudan (UNMISS).

The Security Council delegation is led by the Permanent Representatives of the Missions of Senegal and the United States, and also comprises representatives of all the other permanent and rotating member states of the 15-member body.

“We heard appeals for the peace agreement to be fully implemented, people in these camps feels as if the political agreement that was agreed to remains the last best hope for them and we heard appeals for the UN peacekeeping presence to be more active, to patrol, to offer the protection that people are afraid that security forces for the government don't offer at this time,” Ms. Power added.

At the sites, she said, the delegation met many people who could recount bullets flying over their head in the crossfire of the crises that occurred about two months ago.

In early July, close to the fifth anniversary of the country's independence, the youngest nation was plunged into violence due to clashes between rival forces – the Sudan People's Liberation Army (SPLA), loyal to President Salva Kiir, and the SPLA in Opposition, backing former First Vice-President Riek Machar. That led to deaths and injuries, including those of several UNMISS peacekeepers, also undermining the implementation of the peace agreement between President Kiir and Mr. Machar in August 2015, which formally ended their differences.

The Council, as well as various senior UN officials, including UN Secretary-General Ban Ki-moon, repeatedly spoke out over the violence, condemning it and calling for calm and the safety of civilians.

“So this has been an extremely important visit, because it is our chance to see the human consequences of the failure of political leaders to bring peace back to their country,” the leader of the delegation said.

Ms. Power also said that the delegation met with women who described huge surges in sexual violence against women who leave the camps to get firewood so that they can cook for their family and for their children.

“As a mother I can imagine that choice, a choice in whether I cook for my kids or whether I risk sexual violence outside the camp. I know I will go and take that risk for my children, I think any mother would,” she said.

And not one South Sudanese that the delegation spoke to wants to live in these 'Protection of Civilian' sites. Every single individual wants to go home. They are not going home because they want food or water but they are terrified. Many men described life at the sites as “a kind of prison.”

“And they said that they want this prison sentence to end, and the only way it's going to end is if the UN force gets up to full strength, the regional protection force deploys and the peace agreement is implemented,” Ms. Power said. 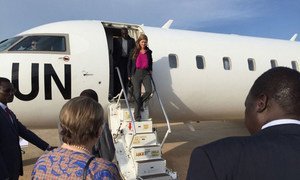 A delegation from the United Nations Security Council today arrived in South Sudan, where it will reinforce recent messages made to the authorities as well as discuss how the UN peacekeeping mission there can help them improve the security and humanitarian situation in the wake of recent violence.