In first visit to Sri Lanka since end of war, Ban flags role of human rights and sustainable development on path to stability

In his first visit to Sri Lanka since the end of its civil war seven years ago, United Nations Secretary-General Ban Ki-moon praised the country’s steps towards peace and reconciliation, while also highlighting the importance of and need for more progress with human rights and sustainable development for that progress.

“This is my first visit to Sri Lanka since 2009, when I saw great suffering and hardship. Hundreds of thousands of people were displaced and in need of humanitarian aid after the terrible conflict that tore the country apart,” Mr. Ban said in his speech to an event held on the theme ‘SDG16: Sustaining Peace – Achieving the Sustainable Development Goals,’ held in the capital, Colombo.

“I called for fast reconciliation and action to build peace, in the knowledge that conflict can recur in fragile post-war societies. Today, the picture is very different,” he added. “I congratulate the Government and people of Sri Lanka for the progress you have made. There remains much hard work ahead, but you have moved with determination along a new path with great promise for all the country’s people.”

The United Nations supported political efforts to resolve the civil war and, during its final stages in 2009, strongly advocated respect for human rights and a humane and orderly end to the fighting. In the aftermath of the conflict, according to the UN Department of Political Affairs, the world body – through the work of its agencies, funds and programmes – has assisted with the return and resettlement of civilians uprooted by the conflict. It has also encouraged the Government of Sri Lanka to adopt policies to promote political reconciliation and a credible accountability process for allegations of wartime violations of international human rights and humanitarian law.

Although much to be done, Ban commends progress so far

In his remarks, the Secretary-General took note of Sri Lanka’s progress since the end the civil war, especially since a new government – that of President Maithripala Sirisena – took office in January this year.

A young girl and her mother at a displaced persons camp in Vavuniya, Sri Lanka (2009). Photo: IRIN

He commended its efforts to move forward on a comprehensive transitional justice agenda and on a constitutional reform process, as well as symbolic steps such as the decision to sing the National Anthem in Sinhala and Tamil on the country’s Independence Day last February – the first time this had happened since the 1950s.

“These steps have built confidence and trust, and strengthened transparency and accountability,” Mr. Ban said. “But more can and should be done to address the legacy of the past and acknowledge the voices of the victims. Sri Lanka is still in the early stages of regaining its rightful position in the region and the international community. There is still much work to be done in order to redress the wrongs of the past and to restore the legitimacy and accountability of key institutions, particularly the judiciary and the security services.”

Links between 2030 Agenda and Sri Lanka’s path to stability

“The 2030 Agenda marks a watershed in the way we have formally linked peace and security to sustainable development,” said Mr. Ban. “It points the way towards reducing violence, promoting harmony and prosperity, and making the world safer for all. The entire 2030 Agenda is centred on respect for human rights. It aims to ensure that no one is left behind, by reaching out to the most vulnerable and marginalized first.”

In particular, he singled out SDG16, which is centred on the promotion of peaceful and inclusive societies for sustainable development, the provision of access to justice for all and building effective, accountable and inclusive institutions at all levels.

“Goal 16 is a benchmark for peaceful and inclusive societies. It demands action against corruption and crime. It requires that institutions function in a transparent and efficient way, based on the rule of law, and that access to justice is guaranteed for all,” the UN chief said. “These are important targets in themselves, but they are also crucial for achieving all the other Goals.”

Importance of a human rights-based approach

The Secretary-General flagged that a human rights-based approach is fundamental both to post-conflict reconciliation, and to global peace and prosperity.

“Here in Sri Lanka, the world’s work for human rights faced one of its most difficult tests. The decades-long civil war saw terrible violence, terrorism, the use of human shields and other grievous violations of human rights and humanitarian law,” he said. “In the conflict’s decisive final stages, tens of thousands of civilians perished. The war was ended – an unquestionable good for Sri Lanka, the region and the world. But we also know that even in its ending, the price was high.”

“I again commend Sri Lankans for examining the difficult period you have now begun to leave behind. I am sure those efforts will continue to generate important lessons for the international community that can save many lives in many places,” Mr. Ban added.

He noted that all sectors of society, in particular women and youth, must be involved in planning for peace and sustainable development, and the results must benefit all.

Recalling his meeting with youth at an event in the southern city of Galle yesterday, the Secretary-General said he was inspired by their vision for a peaceful and sustainable future. He also called for women to “take their rightful place,” and paid special tribute to Radhika Coomaraswamy, his former Special Representative for Children and Armed Conflict, for having worked tirelessly for women and children throughout her many years of public service for the UN. 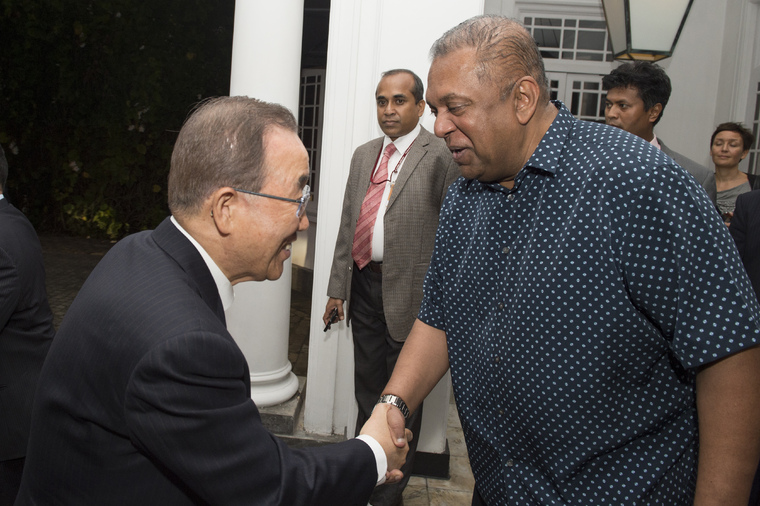 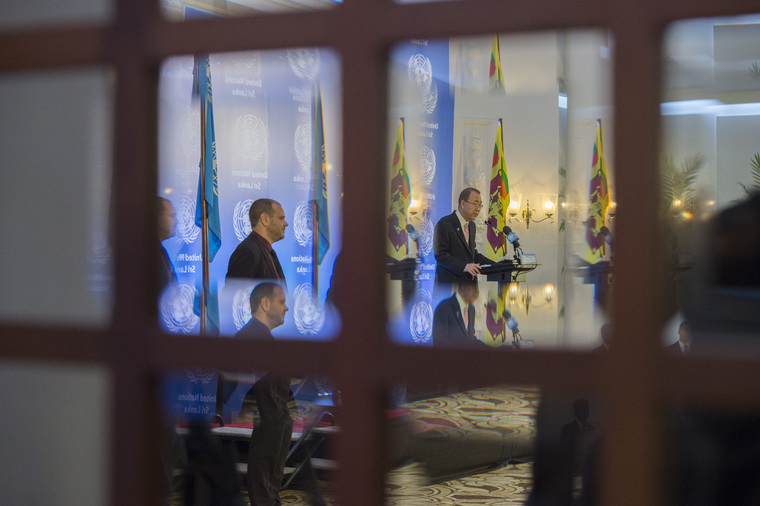 Secretary-General Ban Ki-moon (at lectern) addresses a press conference in Colombo, Sri Lanka, at the conclusion of his official visit to the country. UN Photo/Eskinder Debebe 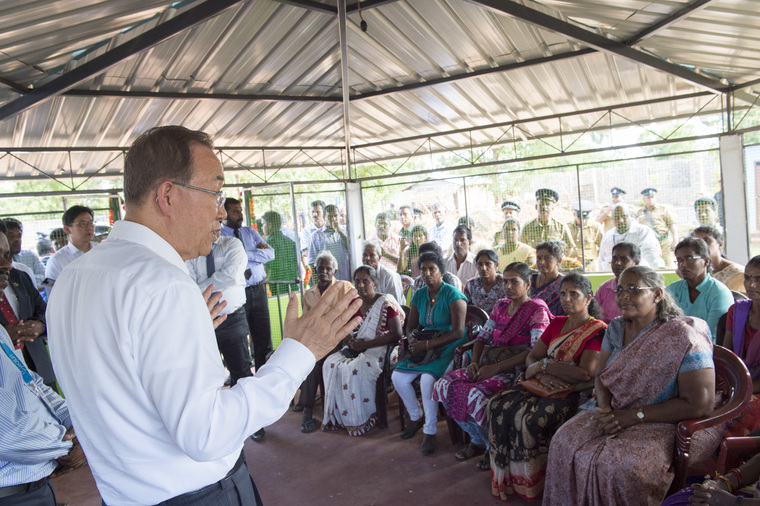 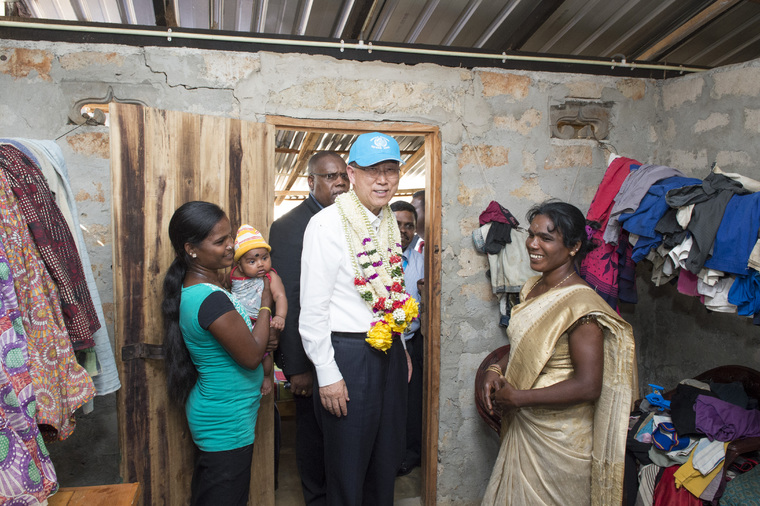 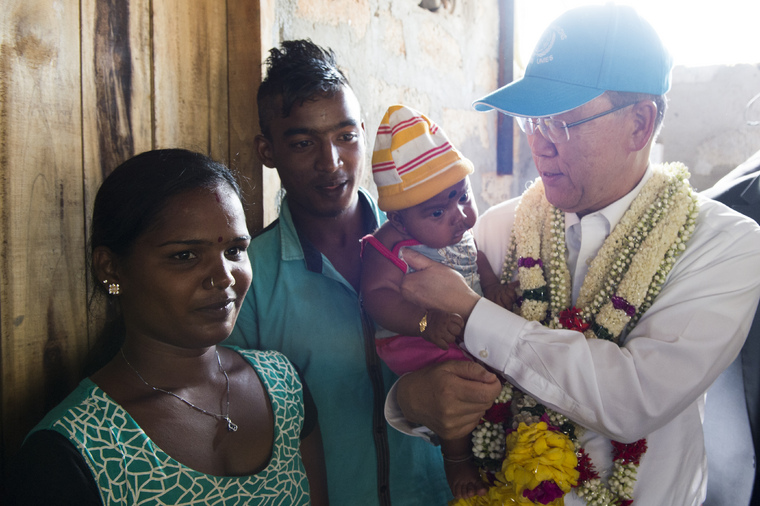 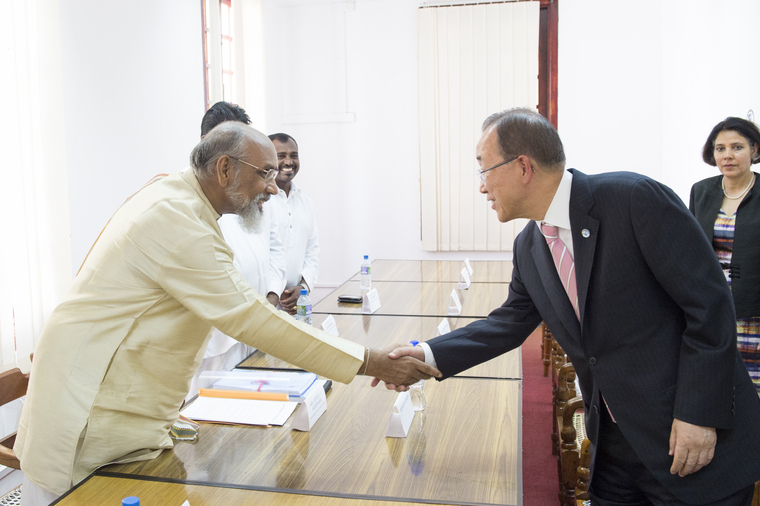 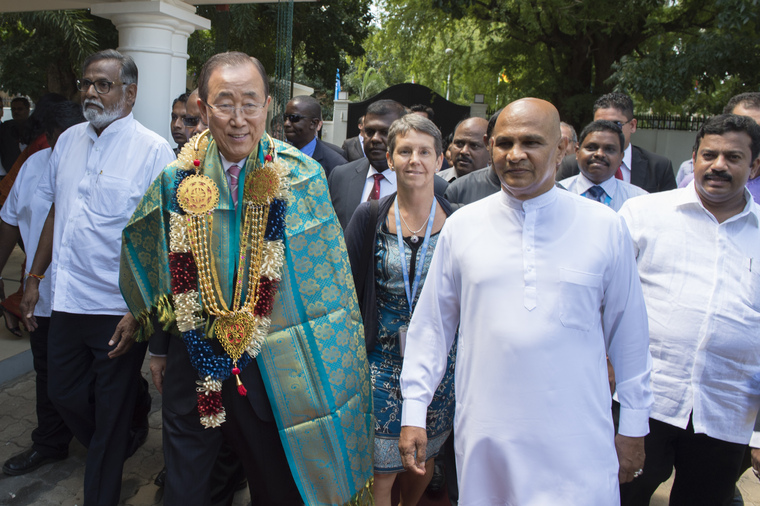 In concluding his remarks, the Secretary General called on all sections of the country, as well as its international partners, to come forward with coordinated support for the framework the government has put in place. He said he looked forward to their contributions in taking this country forward on the new path of peace and reconciliation.

Also on Friday, the Secretary-General addressed a news conference in Colombo, during which he noted the progress the country has made since his last visit, particularly in relation to a visit made earlier today to the northern city of Jaffna, which has a large Tamil population. While there, he met with the Tamil political leadership, civil society members and the governor and discussed the government’s efforts on transitional justice, peacebuilding and reconciliation.

“Great progress has been made in alleviating the problems associated with mass displacement,” Mr. Ban said. “When I was there almost seven years ago, they were all staying in refugee tents. Now they have been building brick houses. While I was also sad to see that they are still suffering from all of these, I saw that they were very busy, they were making their own lives with the help of the international community, UNHCR and other United Nations agencies.”

Involvement of all sections of the society, in particular its young people, in bottom-up peace building approaches is vital to ensure sustainable social justice, United Nations Secretary-General Ban Ki-moon said today at a youth event in Sri Lanka.