In retaliation for the deadly violence on Easter Sunday, against Christians churches and upscale hotels in various parts of the country that left more than 200 people dead and hundreds of others injured, revenge attacks reportedly took place against mosques and Muslims’ homes on Monday.

To be a Sri Lankan is to be a Buddhist, to be Hindu, to be a Muslim, to be a Christian – UN Special Advisers

“It is in the interest of all ethnic and religious groups in Sri Lanka, as well as the Government, the opposition, civil society and the security sector, to work collaboratively in taking appropriate action and immediately stop these hateful attacks”, said Adama Dieng, UN Special Adviser on the Prevention of Genocide, and Karen Smith, UN Special Adviser on the Responsibility to Protect, in a joint statement. Since the 21 April suicide bombings, there has been a spate of attacks against Muslim and Christian communities in the Buddhist-majority country.

According to news reports, Sri Lanka declared a countrywide curfew on Tuesday after a  man was killed by a sword-wielding mob on Monday in an escalating anti-Muslim backlash .

Recalling their recent statements against violent extremism and hate speech, the UN Advisors acknowledged and welcomed the swift response of the Government, including by deploying the security forces to protect affected communities and addressing the spread of false information and incitement to violence.

The @UN is concerned by the emerging communal violence and tension in #SriLanka and calls on the Government and security forces to ensure that the situation does not escalate. Read the full statement and Sinhala, Tamil translations of statement here: https://t.co/XX6yHTPuTQ pic.twitter.com/STqmsH8GtN

They also encouraged the Government to fully investigate these and other similar attacks and bring to justice those responsible for instigating or committing these violent acts.

“The country is trying to move forward from a traumatic period of inter-ethnic armed conflict, but these attacks are pushing Sri Lanka backwards”, the two Special Advisers warned. “If not adequately dealt with, the recent violence has the potential to escalate even further”.

Mr. Dieng and Ms. Smith urged the Government to show that it “will not tolerate the spread of prejudice and hate among groups within its population” at both the national and local levels, “by putting an end to local discriminatory practices that perpetuate religious intolerance and violence”.

They both offered their support to work with the Government on inter-faith, inter-religious harmony and inclusivity.

“Sri Lanka has a pluralistic society” they asserted. “To be a Sri Lankan is to be a Buddhist, to be Hindu, to be a Muslim, to be a Christian”.

Each of these communities are entitled to their identity and to practice their religion in peace and security, as recognized by the country’s Constitution.

“We call on all Sri Lankans to respect one another”, concluded the Special Advisers.

UN Special and Personal Representatives, Envoys and Advisers are appointed by the UN Secretary-General.

Communities in Sri Lanka are uniting, amidst ‘fear and shock’ 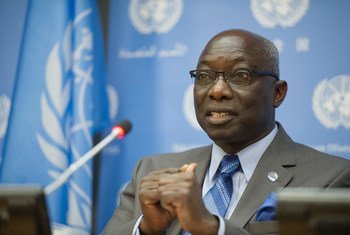