United Nations Secretary-General Ban Ki-moon today submitted a joint UN-Organisation for the Prohibition of Chemical Weapons (OPCW) report to the Security Council outlining in-depth investigation into, as well as the findings, assessments and conclusions of, nine selected cases related to incidents involving the use of chemicals weapons in Syria.

According to a statement issued today by Mr. Ban’s spokesperson, the UN chief is looking forward to the Council’s consideration of the report.

The report will be available publicly shortly thereafter, the statement added.

The methods of work and the investigation of the specific cases are described in the report’s annexes.

According to the statement, the UN chief also expressed appreciation to the Joint Investigative Mechanism’s Leadership Panel and its staff, as well as to the OPCW and the Office for Disarmament Affairs for their continued support to the Mechanism.

He further thanked the Member States of the UN for their assistance to the Mechanism, including financial support.

The joint body, established by the Security Council in August 2015 for a period of one year with a possibility of future extension, is tasked with identifying “individuals, entities, groups, or governments involved in the use of chemicals as weapons, including chlorine or any other toxic chemical,” in Syria, according to the Council, which reiterated that those responsible must be held accountable.

That body differs from the OPCW-UN Joint Mission on the elimination of Syrian chemical weapons, and which was formally established in August 2013. It completed its mandate and wrapped up operations on 30 September 2014. From now on, the OPCW mission in Syria will continue to deal with the destruction of chemical weapon production facilities and clarification of certain aspects of the Syrian initial declaration under the Chemical Weapons Convention. 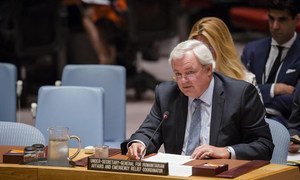 Stressing the need for a 48-hour pause to the fighting in the Syrian city of Aleppo, the United Nations humanitarian chief today urged the United States and Russia to rapidly reach agreement on the security guarantees and operational modalities for a ceasefire there so aid workers can deliver life-saving assistance to those in desperate need.