OCHA/Gemma Cortes
Residents of Bambari, Central African Republic, will benefit from an allocation of $9 million from the UN Central Emergency Response Fund (CERF), which will provide life-saving assistance for people in dire humanitarian need.
16 August 2016

“This funding is a lifeline for the world's most vulnerable people caught up in forgotten crises,” Stephen O'Brien, UN Emergency Relief Coordinator, said in a press release issued by the UN Office for the Coordination of Humanitarian Affairs (OCHA), which he heads up.

The allocation will allow humanitarian partners to respond to protracted emergencies in Central Africa, caused by armed conflicts, political instability and human rights violations, and compounded by food insecurity and disease outbreaks. It will benefit aid operations in the Central African Republic, Chad, and the Democratic Republic of the Congo (DRC), as well as Rwanda, which is hosting refugees from Burundi and DRC. A portion will also support aid operations in Eritrea in responding to current needs due to arid conditions and poor rains. 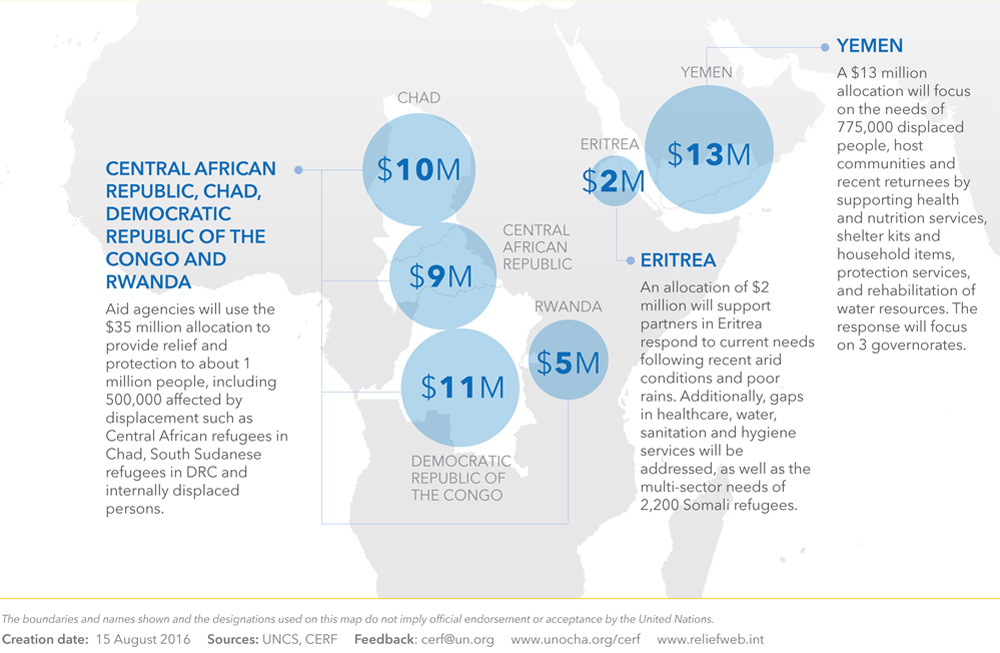 This release brings the total allocation from the CERF's underfunded emergencies window in 2016 to $150 million.

So far, the Fund has received $311 million in contributions for 2016 and disbursed nearly as much to 35 countries for life-saving activities around the world.

According to Mr. O'Brien, in recent years, the global refugee crisis has put enormous pressure on CERF to help millions of people fleeing conflicts that linger for lack of a political solution. AS such, and in light of other ongoing challenges and conflicts, he emphasized that all humanitarian emergencies are underfunded this year.

“I wish I could allocate more CERF funds to these and other protracted crises, given the enormous needs. However, contributions to the Fund are limited and demand from humanitarian partners around the world is high,” he said.

OCHA, which manages the Fund on behalf of the UN Secretary-General, estimates that this year, there will be a $50 million shortfall on the annual $450 million funding target.

“I am very concerned that this could force the Fund to significantly reduce allocations for underfunded emergencies in the future,” noted the UN relief chief, appealing to all UN Member States, regional organizations and private citizens “to scale up their support to CERF and enable us to save more lives.”