UNHCR/Achilleas Zavallis
A refugee from Syria hugs her crying daughter moments after reaching the Greek Island of Lesbos from Turkey in an inflatable boat.
9 August 2016
Migrants and Refugees

The draft document that will be put before the Heads of State and Government and other representatives at the General Assembly’s Summit paves the way for global compacts on greater responsibility-sharing based on a comprehensive refugee response framework, and a range of principles, commitments and understandings among Member States regarding international migration in all its dimensions.

The UN Summit and the proposed commitments by Member States come as the number of people displaced from their homes due to conflict and persecution last year exceeded 60 million for the first time in the Organization’s history. The Global Trends 2015 report compiled by the Office of the UN High Commissioner for Refugees (UNHCR) notes that 65.3 million people were displaced at the end of 2015, a tally that comprised 21.3 million refugees, 3.2 million asylum seekers, and 40.8 million people internally displaced within their own countries.

Yesterday, the UN News Centre spoke with Karen AbuZayd, Special Adviser on the Summit on Addressing Large Movements of Refugees and Migrants on the outcome document and the effort to bring countries together behind a more humane and coordinated approach.

UN News Centre: To start off, could you tell us your reactions to the outcome document?

Karen AbuZayd: I am very pleased with the outcome document. As you know, it was the result of consensus by 193 Member States led by the co-facilitators, the Ambassadors of Ireland and Jordan. The facilitators did a fantastic job […] in bringing the 193 States together to say what they said and to offer the things to the refugees and the migrants, and the host countries […] a lot of new things that will make a big difference.

Special Adviser Karen AbuZayd speaks to the UN News Centre ahead of the summit. United Nations

UN News Centre: What are your thoughts on the criticism that it is weak and that it could have been stronger?

I don’t know why [there is criticism that the outcome] is not strong. There could be some things that are not there that could have been, but all the commitments that are there use very strong language that the Member States agreed by consensus [and] are determined to do. They are acknowledging things, they are saying that they are going to go ahead and [take measures], and many intend to do as well. On the whole, they have agreed to a number of new actions that they will take on behalf of refugees and migrants. We should be happy about this and embrace it.

UN News Centre: How do you feel about the fact that the Secretary-General’s recommendation on resettling 10 per cent of the refugees was not included?

Karen AbuZayd: I would like people to look at that in context. In 2015, for example, UNHCR submitted names for resettlement of 135,000 refugees. UNHCR said what it would like to do – and we put it in the [working draft] document – is resettle 10 per cent of the refugees every year. Now there are 21 million refugees this year – that means two million to be resettled.

UN News Centre: How will this document feed into the summit in September?

Karen AbuZayd: It is a basis for the discussions. And since the 193 States have agreed to it, it means that the commitments that are in there, which they said they want to carry out, will be what comes out of the Summit in September.

UN News Centre: Before we conclude, is there any you would like to add?

Karen AbuZayd: I’d just like everyone to look at the positive side of this. If we begin to say it’s weak, it’s meaningless and so on – first, it’s not true, it’s not weak – there are some very strong things in there and it is certainly meaningful.

For any refugee or a refugee child, in particular, there are so many new things: getting rid of refugee camps; putting refugee children in school soon after they get to where they are going; to have better reception at borders; to work together globally and collectively to bring in international financial institutions immediately; for UNHCR to devise a plan on every major outflow of refugees; and to have a process that is going to begin immediately on having a global compact for migrants as well. So both refugees and migrants will benefit if all of the things that are in that document are achieved. 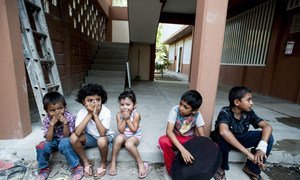