UNICEF/Khalil Alshawi
A child standing in front of his ground-flattened school after a bombardment in Ainjara village in rural Aleppo, Syria.
4 August 2016

As fighting in and around battle-scarred Aleppo intensifies – along with diplomatic efforts to secure a truce – United Nations agencies and their partners are “ready, willing and able” to rush aid to the desperate people trapped there, a senior UN envoy said today, stressing that a humanitarian pause is critical, both to allow relief workers to enter the area, and for civilians to leave voluntarily.

“We are ready to go as soon as we have the pause, and we have a two-way corridor with supplies going in to the people in Eastern Aleppo, but also Western Aleppo, which has now become much more exposed to problems, and which has enormous access problems as well,” Jan Egeland, Special Advisor to the UN Special Envoy for Syria, told reporters in Geneva today.

Stressing that supplies have to go in, and voluntary evacuation out of Aleppo has to be possible, Mr. Egeland said humanitarian pauses and a temporary end to the fighting are badly needed now, more than ever, “for the iconic and much suffering city of Aleppo,” where unimpeded access is “desperately needed.” Voluntary evacuation of civilians, plus wounded and sick, should take place to the places of their choosing and where they feel safe.

“So indeed, we do not have classical humanitarian corridors at all, in Aleppo, but we're working with everybody, including Russia, to get those, and I think the discussions have been very positive, in a sense that everybody now says that we are working towards the same goal of having two-ways humanitarian corridors, of having better protection of civilians, including medical installations,” he said, referring to Russia's plan, announced last week, to set up so-called “exit corridors” to allow for the distribution of food, as well as provide an opportunity for civilians to flee Aleppo.

Mr. Egeland noted that to his knowledge, the number of civilians leaving the area is “very limited so far.” The UN estimates that more than 250,000 people are trapped in the city.

As for the wider humanitarian situation, he said that while the UN had hoped to reach 1.2 million people in Syria's besieged and hard-to-reach areas affected by conflict in July, only some 40 per cent of that number had actually been reached. “It is heartbreaking really, for humanitarian workers that are ready with supplies, with trucks and people who are willing to risk a lot, that we were prevented from reaching 60 per cent of [those] we had hoped to.”

“The main reason for this is the fighting. There is now cross-fire. There is fighting in too many places and that affects, more than anything else, the besieged areas. We were able to reach four besieged areas – Al Waer, Moadamiyah, East Harasta, and with air drops, Deir ez-Zor," Mr. Egeland stated, explaining that this was just about 38 per cent of the people in these besieged areas and that 14 such areas were not reached at all.

At the same press briefing, which took place after the latest meeting of the Humanitarian Taskforce of the International Syria Support Group (ISSG), which is co-chaired by Russia and the United States and comprises the UN, the Arab League, the European Union and 16 other countries that have been working on a way forward since late last year, Ramzy Ezzeldin Ramzy, UN Deputy Special Envoy for Syria, gave a general overview of the situation with a particular emphasis on the political process.

Noting that last week UN Special Envoy Staffan de Mistura had announced his intention to hold the intra-Syrian talks towards the end of August, he said the UN remains committed to that and “we will do everything possible to make sure that these talks are fruitful.”

He explained that for the talks to be fruitful, the cessation of hostilities has to stand and be reinforced, and in that regard, the US and Russia, as co-chairs, are in discussions on that very issue. “Also, the humanitarian situation has to improve. Not much has been accomplished over the past month, largely due to the intensification of the military activities. That is why we attach great importance to the discussions between the co-chairs on that issue.”

Asked by a reporter if “time is slipping away” from the UN to alleviate the suffering in Aleppo, Mr. Ramzy said he did not believe that was the case and indeed there are “intensive consultations” going on between the co-chairs regarding the cessation of hostilities.

“We continue to talk to all the interested parties to make sure the cessation of hostilities is in place to allow us to move ahead. So I think there still is time, we have not given up hope, we cannot give up hope,” he said, adding: “So, bear with us, and I think in the next few days there might be some movement.”

Further, he said the UN believed it is important is to have credible talks, in which parties will engage in a serious manner, “and that requires the regional parties to be on board, but also the situation on the ground – whether the humanitarian side, or the military – and we are all working very hard on that.”

In related news, a UN human rights expert today called on the warring parties to take urgent actions to urgently ensure the rights of all those in Syria's besieged areas and allow rapid and unimpeded passage of humanitarian relief, while calling for the safe and unhindered evacuation of civilians who wish to leave.

“Residents are unable to access adequate food for their daily needs in many besieged areas, where UN agencies have estimated hundreds of cases of malnutrition,” Dainius Puras, the UN Special Rapporteur on the right to health, said in a news release. He added that people struggle to access safe, clean water, and in some areas residents are drinking highly polluted water with harmful chemicals that have significant health risks.

More than five million people live in UN-classified 'hard to reach' areas of Syria. Of these, almost 600,000 people live in 18 besieged areas in Syria, 15 by the Government of Syria or its allies, and three by armed opposition groups or the Islamic State in Iraq and the Levant (ISIL), according to the UN.

In opposition-controlled areas of Aleppo, approximately 250,000 civilians are completely encircled and at risk. In areas besieged by the Government of Syria or its allies, humanitarian agencies cannot deliver assistance without its approval, a cumbersome procedure subject to rejections and delays, according to the news release.

“They are absolutely prohibited from depriving civilians of basic goods such as food or medical assistance needed for survival, said Mr. Puras, underscoring that “all people in Syria must have their fundamental human rights guaranteed.”

“All human rights – including the rights to life, to health, to food, to water, to education and to freedom of movement – must be protected in Syria,” the Special Rapporteur concluded.

In a joint press statement the agencies said that they had completed the urgent relief operation to provide a one-month ration of desperately-needed food and hygiene supplies to.

“Unable either to cross the border or turn back, the situation facing these women, men and children has grown more dire by the day,” the agencies stated and explained that sheltering in makeshift tents in harsh desert conditions with temperatures of up to 50 degrees Celsius and sudden sand storms, the people are without sufficient food and have barely enough water to survive.

“Life-saving health care is also urgently required. Pregnant women, children, the elderly and the sick are especially vulnerable,” they added, thanking Government of Jordan for supporting the critical operation, and looking forward to further efforts to reach people at the berm with humanitarian assistance “in time to save their lives.” 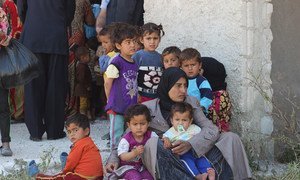 Some 25,000 people displaced by military attacks in western Aleppo – UNICEF

About 25,000 people, including more than 12,000 children, have been displaced last night from a neighbourhood in western Aleppo City by intense military attacks initiated by armed opposition groups, a United Nations Children’s Fund (UNICEF) official in Syria said today, calling on the warring parties to do their utmost to protect all civilians.