Some 25,000 people displaced by military attacks in western Aleppo – UNICEF

About 25,000 people, including more than 12,000 children, have been displaced last night from a neighbourhood in western Aleppo City by intense military attacks initiated by armed opposition groups, a United Nations Children’s Fund (UNICEF) official in Syria said today, calling on the warring parties to do their utmost to protect all civilians.

“Twenty-five thousand people have fled instantly last night from this area, with whatever they could leave the door with,” said Kieran Dwyer, Chief of Communications for UNICEF in Syria, in an interview with the UN News Service via Skype from Damascus.

He said that armed opposition groups launched a major military offensive late yesterday afternoon and evening, attacking through the densely populated western part of Aleppo City. Intense fighting, involving airstrikes and the use of heavy weapons, artillery and mortars, has continued through the night, and throughout the day today, he added.

Mr. Dwyer said that in the affected neighbourhood, people already displaced multiple times had put up temporary shelters in uncompleted high-rise apartment buildings. UNICEF and its partners had been helping them to get water, food, health services, and education so that they could settle for the time being.

Then, the fighting erupted, forcing many of them flee to parks, mosques, and wherever “they can feel a bit safe,” he said, adding that emergency kitchens have been set up, and for its part, UNICEF is running emergency water trucks.

Asked if more people would be displaced, he said that “we don’t know what the dynamic in fighting is going to result in. We are watching and responding at every turn.”

Meanwhile, the eastern part of Aleppo city has been completely cut off from humanitarian aid since early July, he said, noting that UNICEF and all partners are calling for immediate access to the area, where 300,000 people, including over 120,000 children, are in need of nutrition, food, clean water, and health services.

The health system in Aleppo has been devastated, with four military attacks on hospitals last week alone, noted Mr. Dwyer, warning that with only 30 doctors left to serve 300,000, the situation in eastern Aleppo is “dire.”

Regarding the idea of setting up ‘humanitarian corridors’ that would allow aid to be delivered without hindrance, and civilians to flee the besieged areas safely, Mr. Dwyer said that such arrangements must be run by the UN humanitarian team and partners.

If civilians decide to leave, they must be protected at every step, and if they decided to stay, they should be protected from attacks and violence, he added.

In New York today, Farhan Haq, the Secretary-General’s Deputy Spokesperson, reiterated that the UN calls on all parties to the conflict to allow safe, unimpeded and impartial humanitarian access in line with international humanitarian law.

The UN remains deeply concerned over the plight of people trapped in Aleppo, as reports indicate that intense fighting has continued in the last days, and that many stores have closed as food runs low, the spokesperson said.

Meanwhile, he added, an inter-agency convoy delivered food, nutrition, health, water, sanitation, hygiene and other emergency items for 71,000 people in need to the hard-to-reach area of Al Houla, in Homs governorate yesterday. Surgical items were removed from health kits during the loading.

Mr. Haq also said that the UN Special Envoy for Syria Staffan de Mistura visited Teheran on Sunday, and held discussions with Iranian Assistant Foreign Minister Hossein Jaberi Ansari on the means of pushing forward the political settlement to the crisis in Syria.

Mr. Ramzy informed Syria’s Foreign Minister of the Special Envoy’s intention to reconvene the intra-Syrian talks towards the end of August, with a focus on the political transition, according to the UN spokesperson. 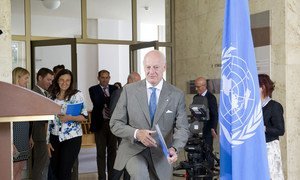 As the humanitarian crisis reaches distressing levels in Syria, particularly in and around battle-torn Aleppo, the United Nations envoy for the country welcomed today initiatives aimed at assisting the civilian population trapped amid the fighting and, “under the right circumstances,” the implementation of humanitarian corridors.