Warning of a possible rise in heatwave deaths due to climate change, the United Nations Office for Disaster Risk Reduction (UNISDR) today called for measures to reduce mortality from this natural hazard.

The warning came days after the World Meteorological Organization (WMO) announced that global temperatures for the first six months of this year reached new highs, setting 2016 on track to be the hottest-ever on record, and the temperature hit 54 degrees Celsius in Kuwait last week.

“Millions of people around the world should be receiving heat-related warnings and advisories if we are to avoid a repeat of the thousands of deaths which occurred last year from heatwaves notably in Asia and Europe,” said Robert Glasser, the UN Secretary-General's Special Representative for Disaster Risk Reduction.

“Climate change is amplifying the impact of many extreme weather events including heatwaves,” he added, stressing the need for disaster risk management to focus more on extreme heat to reduce mortality from this particular natural hazard.

He called for greater effort to ensure that the poor and vulnerable including refugees, children, older persons and persons living with disabilities are reached with early warnings, and that they have access to water and adequate shelter and protection from the heat and the sun.

The theme of this year's International Day for Disaster Reduction on 13 October is reducing mortality.

♦ Receive daily updates directly in your inbox - Subscribe here to a topic.
♦ Download the UN News app for your iOS or Android devices.
disaster|climate change

Time to prepare for disasters caused by climate change is now, says UN 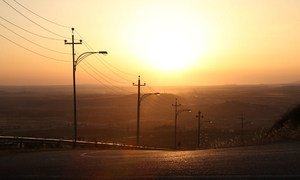