UN/MINUSTAH/Igor Rugwiza
Voting in the second round for the senatorial and parliamentary elections and the first round for a new president in Haiti’s capital Port au Prince, 25 October 2015.
16 July 2016

The United Nations and its partners in Haiti have expressed “deep regret” that for the fourth time in as many weeks, the country's National Assembly was unable to deliberate on the provisional governance arrangements.

In a joint press statement, the Special Representative of the Secretary-General in Haiti and Head of the UN Stabilization Mission in Haiti (MINUSTAH), Sandra Honoré, and the other members of the international community in Haiti represented in the “Core Group” (the Ambassadors of Brazil, Canada, France, Spain, the United States and the European Union, and the Special Representative of the Organization of American States) cited the “absence of a number of parliamentarians leading to a lack of a quorum” as the reason for the failed deliberations.

“Haiti continues to face serious long-term socio-economic and humanitarian challenges. These challenges cannot be fully addressed in an environment of institutional instability,” the Core Group said in a joint press statement, reiterating calls on parliamentarians to resume the session of the National Assembly and to “take action to end the uncertainty that prevails.”

“Reiterating the need to return to constitutional order, the 'Core Group' urges all actors to ensure the completion of the electoral process,” the statement also said.

On 14 February, the Haitian National Assembly elected Jocelerme Privert as the island nation's interim President, one week after former President Michel Martelly departed without a successor. Mr. Privert served as interim President for 120 days, and an election had been scheduled for 24 April, following an agreement – known as the 5 February Agreement – between Haitian stakeholders to preserve institutional continuity and further the electoral process.

Subsequently, on 25 April, UN Secretary-General Ban Ki-moon's spokesperson issued a statement underlining the UN chief's deep concern that that the agreed-upon date for holding elections in Haiti was not met and that no alternate electoral calendar was announced.

In June, when Mr. Privert's 120-day interim period had come to an end, the Core Group called on the National Assembly to take action and reach a solution that avoids an “institutional vacuum,” and to facilitate the return to constitutional order through the holding of elections. 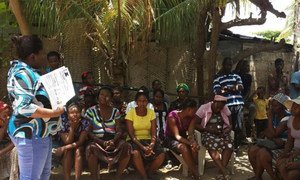