UN Photo/Isaac Bill
The Special Representative for South Sudan and head of UNMISS, Ellen Margrethe Loej, visited Malakal on March 8, 2016 to assess the situation and to meet with stakeholders on the ground, including community leaders within the protection site and Malakal town.

22 June 2016
The United Nations takes “very seriously” the findings of an investigation that confusion over command and control and rules of engagement hampered some peacekeepers' response to a deadly incident at a UN compound in South Sudan, the Organization's top peacekeeping official said today, pledging to follow up on the probe's recommendations.

“We take it very seriously the fact that the Board of Inquiry points to an inadequate response by some of our people on the ground [in Malakal]; there was a lack of responsiveness from some and lack of understanding about the rules of engagement,” Hervé Ladsous, Under-Secretary-General for Peacekeeping Operations told reporters after what he described as “very extensive” closed-door consultations with the UN Security Council.

The UN peacekeeping chief stated that “there was no question that at the time, we made the right decision to take in these people – many of them would be dead now if we had not done that. But then, no one expected the crisis [in South Sudan] to continue for such a long time and that we would still have these huge numbers in our protection sites.”

The briefing came after the release yesterday of a note to correspondents, in which the Office of the Spokesperson for Secretary-General Ban Ki-moon said that a special investigation and a UN Headquarters board of inquiry were convened to review the circumstances of the violence that erupted in the UN Mission in South Sudan (UNMISS) PoC site in Malakal from 17 to 18 February, in which at least 30 internally displaced persons (IDPs) were killed, 123 others were wounded, and a significant portion of the camp was destroyed.

According to the note, the preliminary report of the board mentions, among others, that a number of issues contributed to the incident. On the UNMISS response, there was confusion with respect to command and control and rules of engagement, and a lack of coordination among the various civilian and uniformed peacekeepers in Malakal at the time of the crisis, the note said.

Further to the note, the board also mentioned that there were unrealistic expectations as to the level of protection that UNMISS could feasibly provide to the 48,000 internally displaced persons in Malakal at the time of the incident.

Mr. Ladosus told reporters this evening that even though the two reports on the “very very grave” incident at Malakal are not quite complete and are now being reviewed by legal experts, the officials took it very seriously that the documents “found that while some of our people on the ground responded very well, some did not. So we are following up on this.”

Asked what kinds of actions the UN would take in the wake of the probe's finding, Mr. Ladsous said: “Well there is much to do. Clearly we still have to do a better job in training […] and it's a process. People we trained last year have since rotated [out of the Mission] so we have to make sure new incoming people get training as soon as they arrive in mission.”

“It's also about explaining in depth and making sure that everyone, from the top to the bottom, has a thorough understanding of the rules of engagement and what they should do […] this sort of training has to be undertaken on a very regular basis so that nobody slips through […] the net,” he said.

Asked if he was going to take action on the recommendations form the probe and if it is now time to 'name and shame' the troops involved, Mr. Ladsous said that indeed action would be taken, “but the time to call names has not come.”

Stating that he has already spoken with the Permanent Representatives to the UN of the countries concerned, he said “there will be follow-up as there has been in other theatres of our operations […] certainly there will be repatriation, and in some cases of a unit and in other cases of individual officers.” 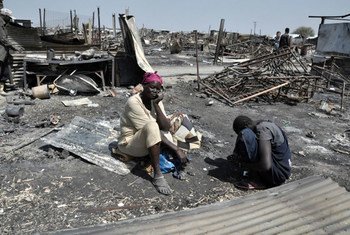 21 June 2016
A United Nations independent high-level board of inquiry has completed a special in-depth investigation into how the UN responded this past February to deadly violence in a protection of civilians site in the town of Malakal, in northern South Sudan.