The top United Nations relief official for Yemen has reported that more than 13 million Yemenis are in need of immediate life-saving assistance as a result of a bleak humanitarian situation in the country that continues to worsen.

“The war has taken a very heavy toll on the country and its people. It is no exaggeration to say the economy is on the verge of total collapse,” he added.

Mr. McGoldrick noted that food and nutrition, insecurity, and access to health care are among the most critical areas of need. He added that people are dying of preventable illnesses, while, overall, access to health-care services for 14.1 million people has been disrupted.

Specifically, the humanitarian coordinator said that nearly 3 million people have fled their homes since the conflict escalated, most of whom – about 2.8 million – are displaced within Yemen.

The conflict has also had significant impact on the education system, with 1,600 schools closed and 560,000 children out of school, he said.

The humanitarian coordinator emphasized that some areas are difficult to reach for security reasons.

“We try to reach those most in need but sometimes this is not possible. The parties to the conflict need to grant unfettered humanitarian access,” he said, adding that the UN response is significantly underfunded. 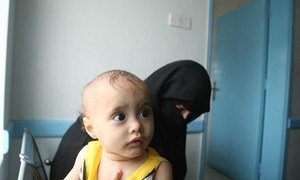 The United Nations human rights office today strongly condemned a series of rocket and mortar attacks against several residential areas and markets in Taiz between since last Friday, which killed 18 civilians, including seven children, and injured 68 others.