FAO/J. Thompson
Child labour on family farms should be addressed in an appropriate and context-sensitive way that respects local values and family circumstances.
12 June 2016

“That child labour has no place in well-functioning and well-regulated markets is evident. But the reality is that today, child labour remains widespread in supply chains,” said ILO Director-General Guy Ryder in a statement to mark the World Day against Child Labour.

This year's focus for the Day – which is observed annually on 12 June – is on child labour and supply chains.

In his message, Mr. Ryder underscored that of the total number of children in child labour, 85 million are in hazardous work. Child labour is also found in other supply chains, from agriculture – 99 million – to mining, from manufacturing to tourism, producing goods and services consumed by millions every day.

The Director-General also noted that child labour occurs predominantly in the rural and informal economies, beyond the reach of labour inspection, the protection of workers' organizations or the governance benefits of employers' and producers' organizations.

“It's not just the lack of institutional protection in the rural and informal economies that increases the risk of child labour in supply chains; in household production and on family farms, children are often highly vulnerable because parents' incomes are insufficient or because small family enterprises and farms cannot afford to replace child labour by hiring adults and youth,” Mr. Ryder said.

“Piece rate production increases the risk with child labour helping parents to make up quotas and to assure family survival when parents are not earning a living wage,” he added.

The Director-General emphasized that while global supply chains can offer opportunities for inclusive development for supplier firms, workers and host countries, targeted action is needed to assure just outcomes.

“Beyond child labour in high profile, global supply chains, many child labourers are also found in supply chains producing for local and national consumption and they must not be ignored,” he said.

“There are encouraging signs of a will to act and to prevent child labour, to achieve greater transparency and visibility along supply chains as well as more effective enforcement of relevant laws,” he added.

The Director-General highlighted that ILO's Minimum Age Convention, 1973 (No. 138) has been ratified by 168 Member States and the Worst Forms of Child Labour Convention, 1999 (No. 182) by 180 – near universal ratification.

In addition, Mr. Ryder said that companies are increasingly exploring how they might contribute to eliminating child labour by strengthening the capacity of enterprises throughout their supply chains – a complex task requiring partnerships involving Governments, industry peers and employers' and workers' organizations.

In that regard, he noted that forums such as the ILO's Child Labour Platform allow enterprises to share good practices and develop new models for collaboration.

“Global Framework Agreements between global trade union federations and multinational companies are one expression of global cooperation through social dialogue. At the grass-roots of value chains too, rural workers' and informal workers' organizations are expanding innovative approaches to strengthen collective representation,” the Director-General said.

Mr. Ryder also highlighted that the ILO's Tripartite Declaration of Principles concerning multinational enterprises and social policy of 1977 recognizes the role of enterprises in the elimination of child labour. With a focus on development and strengthening of enterprise capacity and social dialogue, the declaration holds “great potential to guide action against child labour,” he said.

He also stressed that the 2030 Agenda for Sustainable Development reaffirms the goal of ending child labour.

“Acting together, it is within our means to make the future of work a future without child labour,” the Director-General concluded. 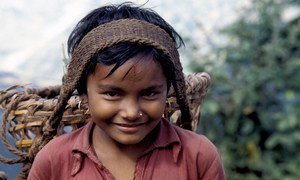 Ahead of the World Day Against Child Labour – to be observed this Sunday – two United Nations agencies today launched an e-learning course aimed at ensuring that child labour prevention measures are included in agricultural and rural development programmes, particularly those targeting poor smallholders.