10 June 2016
The United Nations Special Adviser of the Secretary-General on the Prevention of Genocide has condemned the inflammatory speech by the President of the Gambia, Yahya Jammeh of the Gambia at a political rally this past week, in which he reportedly threatened to eliminate the Mandinka ethnic group.

In a note to correspondents, Adama Dieng, the UN Special Adviser of the Secretary-General on the Prevention of Genocide, said that on 3 June in Tallinding, President Jammeh allegedly referred to the Mandinka as “enemies, foreigners” and threatened to kill them one by one and place them “where even a fly cannot see them.”

“I am profoundly alarmed by President Jammeh’s public stigmatization, dehumanization and threats against the Mandinka,” the Special Adviser said.

“Public statements of this nature by a national leader are irresponsible and extremely dangerous. They can contribute to dividing populations, feed suspicion and serve to incite violence against communities, based solely on their identity,” he added.

Mr. Dieng said he was particularly appalled by President Jammeh’s “vitriolic rhetoric,” as history has shown that hate speech that constitutes incitement to violence can be both a warning sign and a powerful trigger for atrocity crimes.

“We have seen, in Rwanda, Bosnia – and more recently in the Middle East – how incitement to violence has led to mass killings along identity lines,” the Special Adviser said, reminding President Jammeh that any advocacy of national, racial or religious hatred that constitutes incitement to discrimination, hostility or violence is prohibited under international human rights law as well as under national legislation.

“I urge the President of the Gambia to fulfil this responsibility,” said the Special Adviser, “and ensure that the rights of all populations of the Gambia are respected, irrespective of ethnicity or political affiliation.” 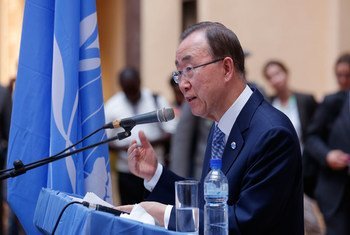 17 April 2016
Concerned about the apparent use of excessive force on peaceful demonstrators in Gambia, United Nations Secretary-General Ban Ki-moon today called on authorities to immediately and unconditionally release all those arrested during Thursday's protest.