UN Photo/Milton Grant
Eritreans celebrate the conclusion of the UN-supervised referendum, held from 23-25 April 1993. The majority voted for independence from Ethiopia.
8 June 2016

Officials in Eritrea have committed crimes against humanity, including enslavement, rape and torture, across the country over the past 25 years, according to a new report released today by the United Nations Commission of Inquiry on Human Rights in Eritrea.

The report found that the crimes were committed “in a widespread and systematic manner” in Eritrean detention facilities, military training camps and other locations.

“Eritrea is an authoritarian State. There is no independent judiciary, no national assembly and there are no other democratic institutions in Eritrea. This has created a governance and rule of law vacuum, resulting in a climate of impunity for crimes against humanity to be perpetrated over a quarter of a century. These crimes are still occurring today,” Mike Smith, chair of the Commission of Inquiry, said in a press release.

The crimes also include imprisonment, enforced disappearances, persecution, murder and other inhumane acts have been committed as part of a campaign to instil fear in, deter opposition from and ultimately to control the Eritrean civilian population since Eritrean authorities took control of Eritrean territory in 1991.

“There is no genuine prospect of the Eritrean judicial system holding perpetrators to account in a fair and transparent manner. The perpetrators of these crimes must face justice and the victims’ voices must be heard,” Mr. Smith noted.

He said the international community should now take steps, including using the International Criminal Court, national courts and other available mechanisms to ensure there is accountability for the atrocities being committed in Eritrea.

The report highlighted that Eritreans also continue to be subjected to indefinite national service, arbitrary detention, reprisals for the alleged conduct of family members, discrimination on religious or ethnic grounds, sexual and gender-based violence and killings.

Chair of the Commission of Inquiry on Human Rights in Eritrea Mike Smith. UN Photo/Jean-Marc Ferré

According to the Office of the UN High Commissioner for Human Rights (OHCHR), the indefinite duration of military and national service programmes are frequently cited by Eritreans as the main reason for fleeing the country.

In 2015, 47,025 Eritreans applied for asylum in Europe, many making the dangerous journey across the Mediterranean in unsafe boats, exploited by smugglers in search of safety.

In addition, the report notes that no improvement was found in the human rights situation documented in Eritrea during the first Commission of Inquiry report published in June 2015.

Officials at highest levels of State responsible for crimes

The report also identified that “particular individuals, including officials at the highest levels of State, the ruling party – the People’s Front for Democracy and Justice – and commanding officers bear responsibility for crimes against humanity and other gross human rights violations.”

It further stated that “the National Security Office is responsible for most cases of arbitrary arrest, enforced disappearance and torture in official and unofficial detention centres.”

Meanwhile, dossiers of evidence have been compiled on a number of individuals the Commission has reasonable grounds to believe bear responsibility for crimes against humanity. OHCHR indicated that this evidence will be made available at the appropriate time to relevant institutions, including courts of law, following strict witness protection requirements, to ensure there is justice for the Eritrean people.

The patterns of conduct described in the report are based on 833 testimonies by Eritreans, including 160 written submissions received during the first term of the Commission of Inquiry, from mid-2014 to mid-2015.

The Commission received some 45,000 written submissions in the course of its second investigation. The vast majority of these were reportedly group letters and petitions critical of the Commission’s first report.

These submissions contained common themes, similar content and were the direct result of an organised Government campaign to attempt to discredit the Inquiry, OHCHR warned. A thorough analysis of these written submissions was conducted and the Commission concluded that they added no substantial information relating to its investigations.

The report states that “the façade of calm and normality that is apparent to the occasional visitor to the country, and others confined to sections of the capital, belies the consistent patterns of serious human rights violations.”

It also underlines “that the types of gross human rights violations in Eritrea documented by the Commission … are not committed on the streets of Asmara, but rather behind the walls of detention facilities and in military training camps. Torture and rape are not normally perpetrated in the open.”

OHCHR indicated that despite requests to the Government of Eritrea, the Commission was denied access to visit the country, but remains open to visiting Eritrea to present its latest findings and recommendations directly to the Government. 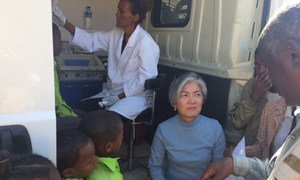 The United Nations Assistant Secretary-General for Humanitarian Affairs and Deputy Emergency Relief Coordinator, Kyung-wha Kang, wrapped up a three-day visit to Eritrea today, where she urged broader support for the Government's efforts to meet basic needs and build resilience of the country's most vulnerable communities.