FAO/M. Griffin
Only a handful of countries have food guidelines promoting diets and food systems that are not only healthy but sustainable.

19 May 2016
Only a handful of governments have issued guidelines promoting “win-win” diets that can help tackle two of the most urgent challenges of today: securing good nutrition for all and protecting the environment, according to a new study by the United Nations Food and Agriculture Organization (FAO) published today.

The Plates, Pyramids, Planet report, compiled in collaboration with the Food Climate Research Network (FCRN) at the University of Oxford, concludes that a plant-based diet has advantages for health and the environment.

Yet only four countries – Brazil, Germany, Sweden and Qatar – promote diets and food systems that are not only healthy but sustainable, the study says. The Netherlands and the United Kingdom have since followed suit.

“Growing numbers of people now understand that diets rich in whole-grains, legumes, fruits and vegetables – with reduced consumption of meat and smaller quantities of high-fat and high-sugar foods – are good for our bodies,” explains lead author Carlos Gonzales-Fischer of FCRN.

He said that there is ample evidence showing that such diets have much lower environmental impacts than the unhealthy and unsustainable eating patterns that are increasingly prevalent today. “So by eating well for our own personal health, we’re also doing right by the planet – in essence, it’s a win-win,” he added.

Sweden is providing more detailed advice on which plant-based foods are to be preferred, recommending for example root vegetables over salad greens. Brazil’s guidelines stand out for emphasizing the social and economic aspects of sustainability, advising people to be wary of advertising, for instance, and to avoid ultra-processed foods that are not only bad for health but are seen to undermine traditional food cultures.

The study emphases that, to have a real effect on food consumption, dietary guidelines need to have clear links to food policies that are actually implemented – such as school and hospital meal standards and advertising and industry regulations. 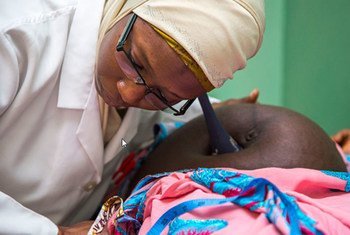 7 April 2016
United Nations Secretary-General Ban Ki-moon marked World Health Day with a strong call for stepping up global efforts to halt the rise in diabetes and improve the lives of those living with this dangerous but preventable and treatable disease.