Armed clashes between illegal groups fighting for territory in western Colombia are driving a growing number of mostly Afro-Caribbean and indigenous peoples from their homes in Chocó department, the United Nations refugee agency warned today, calling on all parties to the conflict to guarantee the safety of the civilian population.

In the past two months alone, more than 6,000 people have fled the fighting, as well as ongoing hostilities in the context of the country's civil war. The clashes, around the Baudo, Atrato and San Juan rivers, have also severely restricted the movements of a further 7,000 people.

“To date, the displacement has mostly affected Afro-Colombians and indigenous people,” William Spindler, spokesperson of the Office of the UN High Commissioner for Refugees (UNHCR), said in a regular bi-weekly news briefing to reporters in Geneva.

“For these people, access to livelihoods, including fishing, hunting and agriculture, has been completely cut off and their children are no longer able to go to school,” he added.

The spokesperson noted that the magnitude of the situation has overwhelmed the local authorities' ability to respond to basic needs, including food, health care, shelter and psychological support.

UNHCR is working in close coordination with the Colombian authorities and other humanitarian agencies to provide emergency assistance and logistical support to the displaced communities.

Mr. Spindler highlighted that the clashes come as the Government of Colombia is in the final stages of peace talks with the Revolutionary Armed Forces of Colombia (FARC), the principal guerrilla force in the country, and recently announced the launch of formal negotiations with another group, the National Liberation Army (ELN).

The peace dialogue, launched in 2012, aims to put an end to more than 50 years of armed conflict with FARC, which has generated close to 7 million internally displaced people and 350,000 Colombian refugees, living mainly in Ecuador and Venezuela.

“UNHCR today urgently calls on all parties to the conflict to guarantee the safety of the civilian population,” Mr. Spindler said. “This includes refraining from establishing military bases in or near civilian settlements and carrying out bombing raids in these areas. It is also essential to address the structural causes of displacement, including control over territory and resources.”

Ending the forced displacement of Colombian internally displaced people and refugees is critical to the establishment of sustainable peace in Colombia and to the country's socio-economic recovery, the spokesperson emphasized.

UNHCR added that failing to reintegrate internally displaced people and returnees will jeopardize the success of the fragile transition period and increases the risk of new displacements. 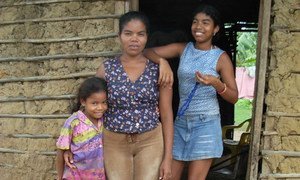 The United Nations refugee agency today called on the negotiators of Colombian peace talks to give special attention to the rights of victims of five-decade conflict that has produced the world’s second-biggest displacement situation after Syria.