UNICEF
A girl uprooted by the ongoing conflict in Syria sits outside a shelter for displaced people in the city of Aleppo.
11 May 2016

Strongly condemning recent attacks on civilians, hospitals and clinics, and camps for internally displaced persons (IDPs) in Syria, a United Nations-mandated human rights inquiry today called on all parties to cease the unlawful attacks and return to a full cessation of hostilities.

“These incidents demonstrate the undeniable fact that this conflict has repeatedly exacted its heaviest toll on civilians,” said Paulo Sérgio Pinheiro, Chair of the Independent International Commission of Inquiry on the Syrian Arab Republic, in a press release issued today by the Office of the UN High Commissioner for Human Rights (OHCHR).

“This flagrant disregard for international humanitarian law is not new, but rather is the continuation of a well-established trend of unlawfully attacking medical sites and personnel, places of refuge, and infrastructure necessary for civilian life,” he stressed.

Specifically, the Commission condemned in the strongest terms recent attacks on civilians and civilian infrastructure, notably on hospitals and clinics in Aleppo city, and on a camp for internally displaced persons in Idlib.

“Aerial bombardments, ground shelling and rocket fire have consistently been used in deliberate, indiscriminate and disproportionate attacks on areas where Syrians civilians live and where they struggle to survive,” the Commission said.

Moreover, the Commission emphasized that since the attacks against Al-Quds hospital in Aleppo governorate on 27 April, there have been more than a half dozen attacks against other medical facilities in the area, all of which are specifically protected sites under international humanitarian law. Scores of civilians and medical personnel have been wounded or killed in these attacks, and the attack on 5 May on the Kamounah camp for IDPs in Sarmada, Idlib, also reportedly killed and injured dozens of civilians.

In recent weeks, markets, bakeries and a water station have also been aerially bombarded. With the one supply route still open to opposition-controlled areas of Aleppo city, the destruction of food, water and medical supplies raises grave concerns for the civilians within, the Commission stressed.

“At a time in which the cessation of hostilities agreement has increasingly deteriorated, it is paramount that all parties to the conflict and those States seeking a peaceful resolution, demand civilian protection measures be taken,” said the Commission, calling on all parties to cease the unlawful attacks on civilian areas, especially humanitarian locations and specially protected sites under international humanitarian law.

The Commission said it has repeatedly noted that international humanitarian law’s foundational principle of distinction – which underlies a number of war crimes – requires all parties to a conflict to distinguish between lawful and unlawful targets. The recent unlawful attacks are violations of international humanitarian law, and some are war crimes, the Commission said.

“Failure to respect the laws of war must have consequences for the perpetrators,” Mr. Pinheiro stressed. “Accountability must be part of the process of returning Syria to peace. Until the culture of impunity is uprooted, civilians will continue to be targeted, victimized and brutally killed.”

The Commission said it strongly supports all efforts to find a political solution to the conflict, including a return to a full cessation of hostilities. It added that it remains committed to fulfilling its mandate to investigate and document all violations occurring in the context of the Syrian armed conflict, regardless of who commits them.

The Commission was established by the Human Rights Council in August 2011 to investigate and record all violations of international human rights law and allegations of crimes against humanity and war crimes. The Commission is also tasked with identifying, where possible, those responsible for these violations with a view to ensuring that perpetrators are held accountable.

In addition to Mr. Pinheiro, the Commission consists of Karen Koning AbuZayd, Special Adviser on the Summit on Addressing Large Movements of Refugees and Migrants, and Carla del Ponte and Vitit Muntarbhorn, who serve as Commissioners.

The Commission will present an oral update to the Human Rights Council in Geneva during an interactive dialogue at its 32nd session in June. 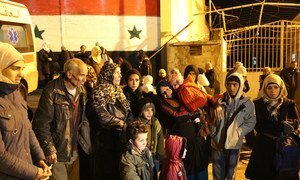 As the Syrian conflict is entering its sixth year, civilians are bearing the brunt of intensifying hostilities conducted by an ever-increasing number of warring parties, with aerial bombardments by pro-Government forces leaving “few safe places,” a new United Nations-mandated report has found.