UNICEF/Mohamed Yasin
A nurse taking care of an infant child in an incubator at the Al-Sabeen Hospital in Sana’a. Hospitals and clinics in Yemen have been paralyzed by the war: they have either been attacked, run out of medical supplies and fuel or the medical staff have been forced to flee.
3 May 2016

With increasing wartime assaults on and patterns of systematic destruction of health facilities in countries affected by conflict, the United Nations Security Council unanimously adopted a resolution today to strengthen protection for health care workers, the sick and wounded, hospitals and clinics, in war zones.

“All too often, attacks on health facilities and medical workers are not just isolated or incidental battlefield fallout, but rather the intended objective of the combatants. This is shameful and inexcusable,” Mr. Ban told Council members.

In Syria and elsewhere, he noted that Governments impose “cumbersome procedures” that restrict access to healthcare: “This is strangulation by red tape. It is violence by bureaucratic means rather than force of arms, but it is just as devastating,” he said.

The UN chief urged all Member States, parties to conflict and other relevant actors to heed the Council’s demands by:

Also in attendance at today’s meeting were the leaders of two of the largest non-governmental organizations (NGOs) consistently working in conflict zones and disaster-hit regions providing health care to people in dire need. Mr. Ban told Peter Maurer, the President of the International Committee of the Red Cross (ICRC), and Dr. Joanne Liu, the International President of Médecins Sans Frontières (MSF), that their NGOs play “unique and vital roles.”

“Through their leaders here today, I want to thank and commend all of their personnel for their professionalism and dedication in serving people in danger and distress across the world,” he said, recalling that last week, MSF’s head of mission in war-ravaged Aleppo had underscored the urgency and importance of efforts such as today’s resolution.

Aleppo was recently hit by an air strike, which Mr. Ban said was “by all accounts by the Government of Syria.” It destroyed a hospital and killed at least 20 people, including three children and the area’s one and only paediatrician, Dr. Mohammad Wassim Maaz.

“Yet this appalling act was only the latest wartime assault on health care in Syria,” the UN chief warned. “Since the beginning of the conflict, Physicians for Human Rights has documented more than 360 attacks on some 250 medical facilities. More than 730 medical personnel have been killed.”

He added that a similar pattern of systematic destruction of health facilities is evident in Yemen, with more than 600 medical facilities having closed because of damage sustained in the conflict and shortages of supplies and medical workers.

“Last year, the United Nations verified 59 attacks against 34 hospitals. In January this year, Coalition air strikes hit the Shiara Hospital, which serves around 120,000 people in Sa’ada Governorate,” he said. “And last October in Kunduz, Afghanistan, a bombing by United States military destroyed another MSF hospital and killed dozens, as patients were burned alive in their beds.”

Mr. Ban went on to say that such patterns of destruction are repeated in other conflicts, including in Iraq and South Sudan, where violence against health care is multiplying the difficulties of already fragile health systems. “When so-called surgical strikes end up hitting surgical wards, something is deeply wrong,” he said: stressing: “Explanations ring hollow to parents burying their children and communities pushed closer to collapse.”

Highlighting that wars and armed conflicts have evolved from open battlefields to urban areas, and from pistols to mass shelling and bombardments by air forces, ICRC’s Peter Maurer said “the wounded and sick are not just those in uniforms.”

“Attacking a hospital, threatening a doctor, coercing a nurse to give preferential treatment to armed fighters, hijacking ambulances, using patients as human shields – these are not collateral damage. These are not sad realities we have to get used to. They are abominations to fight and trends to roll back,” he said.

Mr. Maurer commended the Security Council for passing the resolution, noting that it underlines “the importance of international humanitarian law, calling on States and all parties to armed conflict to comply with their obligations and develop effective measures to protect people's lives by preventing and addressing violence against medical personnel, facilities and transports, and humanitarian personnel exclusively engaged in medical duties.”

“This resolution marks a momentous step in the international community's efforts to draw attention to a problem that we otherwise risk getting used to through the sheer frequency of its occurrence,” he added.

Meanwhile, MSF’s Joanne Liu told Council members that while the nature of warfare may have changed, the rules of war have not.

“You are charged with protecting peace and security. Yet four of the five permanent members of this Council have to varying degrees, been associated with coalitions responsible for attacks on health structures over the last year. These include the NATO-led coalition in Afghanistan, the Saudi-led coalition in Yemen, the Russia-backed, Syrian-led coalition. You therefore must live up to your extraordinary responsibilities, and set an example for all States,” she stated.

“This resolution must lead to all states and non-state actors stopping the carnage. You must also pressure your allies to end attacks on healthcare and populations in conflict areas. We will not leave patients behind. And we will not be silent. Seeking or providing healthcare must not be a death sentence. You will be judged not on your words today, but on your actions. Your work has only begun. Make this resolution save lives,” she concluded.

In his address, the Secretary-General also reiterated that the World Humanitarian Summit, a two-day conference in Istanbul beginning on 23 May, is the moment to renew commitments to preventing and ending crisis, and that the engagement of all partners – Governments and NGOs – is necessary.

“The success of the World Humanitarian Summit is in your hands,” he stressed. 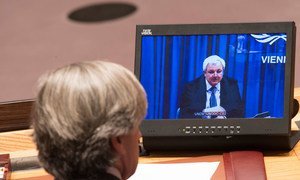