Speaking ahead of United States President Barack Obama’s visit to Flint, Michigan, three United Nations experts are calling for immediate action to address the serious human rights concerns related to the contamination of the city’s water supply and the devastating consequences for residents there, who have been dealing with water-related crises since April 2014.

The decline of federal funding in the US for water and sewer systems in recent decades has disproportionally affected poorer cities; 41.5 per cent of Flint’s residents live below the poverty line, and 56.6 per cent are African-Americans. Thousands of the city’s residents have received water shutoff notices in 2015 because they could not afford their bills for one of the most expensive water and sanitation services in the US.

The UN experts on extreme poverty, water and sanitation, and housing said that the Flint case dramatically illustrates the suffering and difficulties that flow from failing to recognize that water is a human right, not ensuring that basic services are provided in a non-discriminatory manner, and treating those who live in poverty in ways that exacerbate their plight.

They welcomed President Obama’s visit as an opportunity to address the situation in Flint and to show global leadership by acknowledging that governments the world over have a human rights-based obligation to ensure everyone’s access to safe drinking water and sanitation, no matter their socio-economic status.

“Decisions would never have been made in the high-handed and cavalier manner that occurred in Flint if the affected population group was well-off or overwhelmingly white,” said Philip Alston, UN Special Rapporteur on extreme poverty and human rights.

Leilani Farha, UN Special Rapporteur on adequate housing, cautioned that “the impact on housing and living conditions for an already vulnerable group is clear and devastating.”

“There are deep and obvious connections between the human right to adequate housing, the human rights to safe drinking water and sanitation and the right to life,” the expert said. 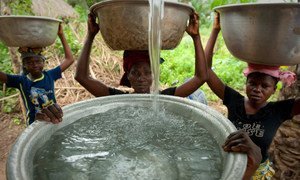