A year after a series of major earthquakes devastated large areas of Nepal, the United Nations Environment Programme (UNEP) and partners are continuing to support green and sustainable post-disaster recovery in the country.

“As the reconstruction effort continues, UNEP will promote a green, resource-efficient and sustainable reconstruction process in the country, focused on environmental recovery, restoration of life- and livelihood-supporting ecosystems, and promoting resource efficiency,” said Isabelle Louis, Regional Director and Representative, UNEP Regional Office for Asia and the Pacific, in a press release.

“The aim is to ensure that the rebuilding results in enhanced environmental resilience of the people of Nepal and its ecosystems,” she added.

The 25 April 2015 earthquake and its aftershocks killed more than 8,700 people, injured more than 22,000, and destroyed and damaged more than 250,000 houses. While 8.1 million people were directly affected, millions across the mainly rural nation were exposed to increased landslides. Major life-supporting ecosystems were also severely damaged.

UNEP said that a rapid environmental assessment undertaken by the Government of Nepal following the earthquake revealed significant destruction of forests and protected areas as well as damage to ecotourism infrastructure such as nature trails, trekking routes and camping sites.

The earthquake also destroyed renewable rural energy technology solutions such as improved cooking and biogas stoves. Water sources shifted in some areas, with reduced or no flows in places, and new sources starting to flow in others.

Amod Dixit of the Nepal Society for Earthquake Technology talks about the opportunity to make Nepal safer for the next big one. Credit: United Nations

Freshwater ecosystems were also affected by increased sedimentation and some rivers were temporarily blocked by landslides. The economic cost of loss of ecosystems services from landslides has been estimated at nearly $328 million, according to the agency.

Following the earthquake, UNEP worked with the Government of Nepal to mitigate the adverse environmental impacts of the disaster. This included the development of a comprehensive waste management strategy at national and sub-national levels to manage the estimated 3.9 million tons of earthquake debris, which included hazardous material.

The Asia and Pacific region accounts for nearly half of the world's natural disasters. The five biggest disasters to strike Asia Pacific in 2013 caused some $100 billion in economic loss and killed more than 19,000 people.

In related news, the head of the UN Office for Disaster Risk Reduction (UNISDR), Robert Glasser, today marked the anniversary of the 7.8 magnitude earthquake that struck Nepal this past year with a call for greater investment in resilient infrastructure if the death toll from future earthquakes is to be reduced.

“The Nepal Earthquake was long forecast and worse could happen in the future,” Mr. Glasser

said. “As the rebuilding effort is now set to get under way in earnest, every support must be extended to the 3 million or more people who lost their homes a year ago so they build back better to earthquake-resistant standards.”

Mr. Glasser said that UN Member States have recognized that reducing earthquake risk is a priority given that about 750,000 people have died in earthquakes and tsunamis over the past 20 years.

Nepal and recent earthquakes in Ecuador and Japan are a reminder of the urgent need to invest in disaster-resilient infrastructure as agreed in the Sendai Framework for Disaster Risk Reduction. A major part of urban resilience is ensuring compliance with building codes and planning laws.

“Nepal is a textbook example of how difficult and long drawn out the process can become when risk governance is complicated by the overall political context, including major gaps at the level of local government. The socio-economic impact of this disaster is enormous and it will have a long-term impact on the country’s development and the welfare of its people,” he added.

Along those lines, health sector partners recently reviewed lessons learned from the earthquake, and recommended strengthening and expanding emergency preparedness and response capacities beyond the national capital, and testing them periodically, to prepare better for future emergencies.

A group of pregnant women and mothers sit outside the Primary health centre of Gorkha District, the epicenter district of the April 2015 earthquake in Nepal. Photo: UNICEF/Narendra Shrestha

“We must learn from the Nepal earthquake, just as we did from the Indian Ocean tsunami. Applying lessons learned from such events can help strengthen our efforts for preventing emergencies from becoming disasters,” said Poonam Khetrapal Singh, Regional Director for WHO South-East Asia.

Ms. Khetrapal Singh was addressing a two-day conference organized by the Ministry of Health, Nepal and WHO, in Kathmandu on 20-21 April. Priority lessons identified in the meeting will be consolidated into a road map for further action.

Among the key lessons highlighted at the conference was the need for extending emergency preparedness and response measures beyond the national capital, to the districts.

As more than 80 per cent of health facilities in the affected districts were either damaged or destroyed in the 2015 earthquake, the injured had to be rushed to hospitals in Kathmandu, which remained functional as they had been retrofitted, their staff trained in mass casualty management and they had emergency plans in place that were immediately activated.

“The preparations that were done in Kathmandu hospitals helped saved many lives. Similar preparations need to be put in place at all other levels too, so that in the event of an emergency, everyone throughout the health system is prepared and knows what to do,” said Ms. Khetrapal Singh.

“As health facilities are being reconstructed, there is an opportunity to build better, and put more risk reduction measures in place,” she added.

She stressed that stronger policies will be needed for ensuring that disaster risk reduction measures are implemented and emergency preparedness and response capacities are built at all levels, with all cadres of health staff trained.

“Strengthening emergency preparedness and response capacity should be an ongoing process in Nepal and in all other countries. With WHO South-East Asia Region prone to natural calamities, the lessons learnt from the Nepal earthquake are important for the entire region to prepare better to respond to emergencies,” Ms. Khetrapal Singh concluded. 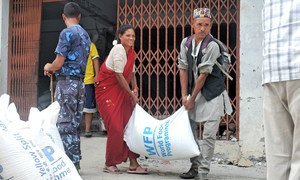 Nepal: one year after earthquake, UN food relief agency focuses on most vulnerable

A year after an earthquake in Nepal that killed more than 9,000 people and led to damages and losses estimated at $7 billion, the United Nations World Food Programme (WFP) said today that it is working with the Government so those most vulnerable to food insecurity are not left behind.