WFP Media
Loading trucks with WFP food for the quake-stricken town of Pedernales in Ecuador.
19 April 2016

At the request of Ecuador’s Government, the World Food Programme (WFP) and authorities organized truckloads with enough food to feed 8,000 people for 15 days in the worst-hit areas. WFP has also mobilized an emergency team to the quake-affected areas to assess the humanitarian and food security situation, the agency said in a press release.

Because the region was bracing itself for the impact of El Niño, emergency food assistance kits had been ready to go. The kits, including quinoa, rice, pasta, tuna, sardines, oatmeal and lentils, were designed months ago by WFP and the country’s Secretariat for Risk Management as the most effective type of assistance for people living in the coastal areas.

“This first delivery of food assistance will make a tremendous difference in the lives of people who are overcoming such hardship,” said WFP Country Representative Kyungnan Park. “WFP was ready to react swiftly to this emergency thanks to joint efforts with the Ecuadorian Government to prepare a response to the El Niño weather phenomenon, which is currently affecting the country.”

Additional food assistance will be delivered to 12,000 people and more than 1,000 hospital patients also affected by the earthquake. As more information about the extent of the damage and food needs becomes available, further assistance will be provided upon the Government’s request.

Meanwhile, the UN Children’s Fund (UNICEF) is reporting that at least 150,000 children are affected by the April 16 earthquake. According to preliminary Government reports, the earthquake damaged 119 schools, affecting 88,000 children. Some 805 buildings have been destroyed and 608 have been damaged. Two hospitals have entirely collapsed in Portoviejo and Chone.

In response to Ecuador’s 7.8 magnitude earthquake which rocked the country on 16 April 2016, UNICEF’s global warehouse in Copenhagen packs water, sanitation and hygiene (WASH) and shelter items that will be airlifted to Quito by special charter. Photo: UNICEF/Maria Ieroianni

In some of the worst hit areas, UNICEF says that mudslides are causing further damage to infrastructure and hindering access of relief teams and supplies. Some cities are still without full power and only 40 per cent of communication lines are working.

UNICEF is concerned about health, water and sanitation conditions in the coastal areas – which are already considered hotspots for Zika, Dengue, Malaria and Chikungunya.

“We are in a race against time to protect children from disease and other risks common in such emergencies,” said Grant Leaity, UNICEF Representative in Ecuador.

Ban monitoring developments in aftermath of massive earthquake in Chile 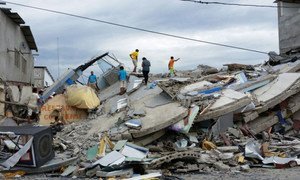 While the Government of Ecuador is leading the response to continue helping people and communities affected by Saturday’s 7.8 magnitude earthquake, the United Nations announced it has deployed relief teams to provide additional support.