The United Nations envoy for Yemen has announced that the start of the Yemeni-Yemeni peace negotiations set to begin today in Kuwait has been postponed.

In a press release, Ismail Ould Cheikh Ahmed, UN Secretary General’s Special Envoy for Yemen, thanked the Government of Yemen for its commitment and its delegation’s arrival on time.

“I hope that Ansar allah and the General People’s Congress do not miss this opportunity that could save Yemen the loss of more lives and put an end to the circle of violence that has engulfed the country,” he said.

According to media reports, these delegations representing the Houthi rebel group and the party of former President Ali Abdullah Saleh have yet to depart for the talks, citing heavy fighting and Saudi-led air operations as the reason.

“We are working to overcome the latest challenges and ask the delegations to show good faith, participate in the talks in order to reach a peaceful resolution to the crisis in Yemen,” the special envoy said.

“The next few hours are crucial. We call on the parties to take their responsibilities seriously and agree on comprehensive solutions,” he said.

The negotiations are expected to centre on a framework that paves the way for a peaceful and orderly process based on the Gulf Cooperation Council (GCC) initiative and the outcomes of the national dialogue conference. 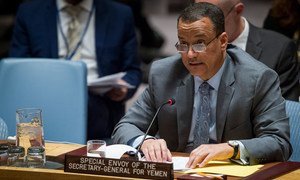 Yemen is now at a critical crossroads, the United Nations Security Council heard today from the UN special envoy for the country, with one path leading to peace while the other can only worsen the security and humanitarian situation.