UNICEF/Christine Nesbitt
A child plays in a wheelbarrow while her family collects water into jerrycans in Brazzaville, the capital of the Republic of Congo.
13 April 2016

United Nations Secretary-General Ban Ki-moon said he is “deeply concerned” about recent reports that security operations undertaken by the Government of the Republic of the Congo in an area of southern Brazzaville known as “the Pool” allegedly resulted in attacks against civilian targets and displacement of the population from the affected areas.

A statement attributable to the Spokesman for the Secretary-General said the UN chief is also “troubled about restrictions on access to the region, which hamper adequate information gathering, evaluation and reporting on the situation.”

Condemning all acts of violence, the Secretary-General also urged the Government of the Republic of the Congo to ensure that humanitarian and other relevant actors are granted access to the affected areas and population, and that security forces act in compliance with the country’s obligations under international human rights and humanitarian law.

Calling on all parties to show restraint and to engage in constructive and inclusive dialogue in the aftermath of the presidential election, Mr. Ban said he is dispatching his Special Representative for Central Africa and Head of the UN Regional Office for Central Africa (UNOCA), Abdoulaye Bathily, to Brazzaville to consult with national authorities and other relevant stakeholders in order to defuse tensions.

Earlier today, the UN human rights chief today expressed concern over “very alarming reports” coming out of the Republic of Congo regarding the apparent Government security operation in Brazzaville.

In a statement, UN High Commissioner for Human Rights Zeid Ra’ad Al Hussein said that since the 20 March presidential election, there have been reports that security operations have been conducted against opposition leaders and supporters who allegedly attacked a police station and areas in the southern part of the capital on 4 April.

The Government has announced that 17 people died in security operations, including three members of security forces, with several others wounded, he said.

“There have been reports of mass arrests and torture in detention, as well as the killing and displacement of people from the Pool,” Mr. Zeid said. “The reports have been difficult to verify, given the lack of access to the area by independent actors.”

Mr. Zeid urged the Government to ensure that humanitarian actors access the Pool and that security forces act in full accordance with the Republic of Congo’s obligations under international human rights law.

“Any incidents involving the use of force, particularly lethal force, by the security forces must be thoroughly, promptly and impartially investigated,” Mr. Zeid stressed.

“All those arrested and detained must not be ill-treated. They should either be charged and brought before a judge, in line with international due process standards, or be swiftly released,” he added.

Mr. Zeid called on the Government, political leaders and their supporters to endeavour to resolve all differences peacefully and within the law, and to “eschew violence in the exercise of the rights to freedom of expression, association and peaceful assembly.”

♦ Receive daily updates directly in your inbox - Subscribe here to a topic.
♦ Download the UN News app for your iOS or Android devices.
Republic of Congo 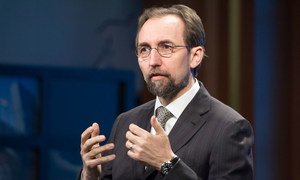