The United Nations refugee agency is helping hundreds of Congolese to repatriate from Gabon to their former homes over the next week as a deadline looms for them to either apply to remain in Gabon or lose their refugee status.

The United Nations refugee agency is helping hundreds of Congolese to repatriate from Gabon to their former homes over the next week as a deadline looms for them to either apply to remain in Gabon or lose their refugee status.

About 450 people have signed up in recent days to be repatriated to the Republic of Congo, according to Fatoumata Lejeune-Kaba, a spokesperson for the UN High Commissioner for Refugees (UNHCR).

She said a return convoy was leaving Gabon today, and at least three more convoys are slated to depart within the next week. UNHCR has placed staff in two locations in the Republic of Congo to monitor the process and help the returnees reintegrate into their villages of origin.

The convoys are taking place as the refugee status of about 9,500 Congolese living in Gabon – part of a larger group of people who fled conflict in the Republic of Congo between 1997 and 2003 – ends on Sunday after the Gabonese Government decided in January that it is now safe for those people to return home.

More than 1,000 Congolese have since applied for residence permits to stay in Gabon as regular migrants, and already 217 permits have been granted in the Gabonese capital, Libreville, with others being granted at different locations across the country.

Ms. Lejeune-Kaba said UNHCR has been helping the refugees by paying the administrative fee of 150,000 Central African francs (or about $300) needed for a residence permit.

She said the agency was pleased that Gabonese authorities had taken steps to ensure that immigration officials understand the new procedures and that there would be no arrests made once the refugee status ends on Sunday.

Those steps would allow the Congolese, after Sunday, to continue to apply for residence permits, to seek exemption from the need for such permits, or to repatriate.

♦ Receive daily updates directly in your inbox - Subscribe here to a topic.
♦ Download the UN News app for your iOS or Android devices.
Republic of Congo 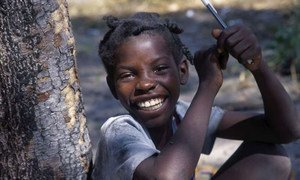 The United Nations refugee agency and the International Organization for Migration (IOM) today launched an appeal for $21 million to help some 60,000 Angolan refugees return home this year and next.