UNICEF/Mohamed Hamoud
Boy playing on piece of exploded artillery shell which landed near his home, in the village of Al Mahjar, a suburb of Sana’a, Yemen.
11 April 2016

The United Nations Special Envoy for Yemen has welcomed the start of the cessation of hostilities that began at midnight, 10 April, urging all parties to work to ensure that the terms are fully respected and create a conducive environment for the peace talks scheduled to resume next week.

In a statement, the UN Secretary-General's Special Envoy, Ismail Ould Cheikh Ahmed, highlighted that the terms and conditions for the cessation of hostilities include commitments for the unhindered access for humanitarian supplies and personnel to all parts of Yemen.

“Both sides have committed to adhere to the Terms and Conditions for the cessation of hostilities which I presented,” said the Special Envoy. “I ask all the parties and the international community to remain steadfast in support for this cessation of hostilities to be a first step in Yemen's return to peace. This is critical, urgent and much needed. Yemen cannot afford the loss of more lives.”

Mr. Ould Cheikh Ahmed noted that the De-escalation and Co-ordination Committee has been reconvened in Kuwait and will work to bolster adherence to the cessation of hostilities. The Committee, comprising military representatives from both sides, recently concluded a capacity-building exercise conducted by experts from the European Union, he said.

“Much work lies ahead to ensure full respect of the cessation of hostilities and the resumption of peace talks in Kuwait. Now is the time to step back from the brink. The progress made represents a real opportunity to rebuild a country that has suffered far too much violence for far too long,” added the Special Envoy. “A positive outcome will require difficult compromises from all sides, courage and determination to reach an agreement.”

Preparations are currently well under way for the start of the intra-Yemeni peace talks, to be held under the auspices of the UN. The talks will focus on five main areas: the withdrawal of militias and armed groups; the handover of heavy weapons to the State; interim security arrangements; the restoration of state institutions and the resumption of inclusive political dialogue; and the creation of a special committee for prisoners and detainees.

In related news today, Leila Zerrougui, Special Representative of the Secretary-General for Children and Armed Conflict, and Peter Salama, Regional Director for the Middle East and North Africa for the UN Children’s Fund (UNICEF), expressed hope that the cessation of hostilities and peace talks will bring an end to the conflict in Yemen.

“We call on all parties to the conflict to comply with their obligations under international humanitarian law, to commit to releasing children who have been recruited and used in the fighting, and to end all grave violations against boys and girls. Parties should take every possible measure to protect schools and hospitals, and facilitate the delivery of humanitarian assistance to children and all those in need,” the officials said in a statement.

Noting that the children of Yemen are “bearing the brunt of a brutal conflict,” Ms. Zerrougui and Mr. Salama said the cessation of hostilities is an opportunity for parties to take action to improve their protection.

The officials highlighted that the UN has verified a significant increase in grave violations against children by all parties to the conflict in Yemen. According to recent figures, 900 children were killed, a seven-fold increase compared with 2014. Child recruitment increased five times, with 848 cases verified.

Meanwhile, attacks on schools and hospitals have doubled, bringing the total number to more than 115. The disruption in the delivery of basic services has deprived thousands of children of their fundamental rights to education and health, the officials said.

They also emphasized that the incidents that the UN was able to verify represent “the tip of the iceberg,” but reveal some “very concerning trends.” Among the trends is the estimation that children represent about one third of all civilians killed and close to a quarter of those injured.

Another trend is that attacks on civilian infrastructure, especially schools and health clinics, have become commonplace. In addition, children are now playing a more active role in combat and manning checkpoints, including on the front-lines, the officials said.

“Taken together these data represent a disturbing pattern of flagrant disregard for international humanitarian law and the rights of children in Yemen. These patterns have far-reaching implications for the stability of Yemen and the future of its children,” the officials said. 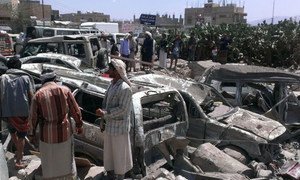 Preparations are underway “at full speed” for the next round of United Nations-brokered intra-Yemeni peace talks to start on 18 April in Kuwait, a UN envoy said today.