The United Nations mediator on the crisis in Syria said today that the next round of the peace talks will likely begin on Wednesday, 13 April, and is intended to be a concrete discussion leading to “a real beginning of a political transition.”

Speaking to the media today, UN Special Envoy for Syria Staffan de Mistura said that between now and then, he plans to visit Damascus and Teheran – and perhaps Amman and Beirut on the way– as well as to meet some Turkish and Saudi authorities in Europe.

“Frankly the next round of the intra-Syrian talks need to be quite concrete in the direction of a political process leading to a real beginning of a political transition,” he said, adding: “Now since this is real stuff, I need to verify the international and regional stakeholders' position in order to see how is the level of positive critical mass leading to concrete results in the next round of talks.”

In the Syrian capital, Damascus, he plans to meet the Foreign Minister and the Deputy Foreign Minister, but has no appointment to see President Bashar al-Assad. The main purpose of the trip is to see whether there is “a critical understanding, or mass, of what could be a framework of a political transition,” Mr. de Mistura said, citing that the cessation of hostilities took place because “there was, at a certain point, a critical mass on which we could work on.”

Also briefing the press on humanitarian aid delivery, Jan Egeland, Special Advisor to Mr. de Mistura, said that “April was supposed to be our best month,” but “it's not looking so.”

“So far I am disappointed and disheartened at what we achieved over the last week,” he said, noting that five convoys were not able to go for the last four days, and as a result, 287,000 people didn't get the relief in hard-to-reach areas or in besieged areas.

He said that despite a new procedure that a permission will be issued within seven days and the final clearance will be given within another three days, four of the five were not given facilitation letters by the Government, and the other was blocked by some of the armed opposition groups.

With a major vaccination campaign entering into its intensive phase, he noted that there are problems in many places, urging the Government and the armed opposition groups not to stop volunteers and health workers who are to vaccinate millions of children for epidemic diseases.

“One positive thing” is that in the very near future, up to 500 wounded, sick and their relatives will be evacuated from the four towns, Madaya, Zabadani, Foah and Kefraya, he said. “It's one of the biggest medical evacuations that have been planned.” 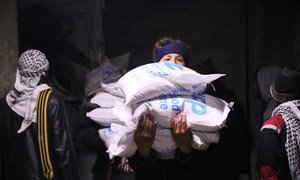 Diplomats are “very frustrated” about not being able to keep the early momentum in the humanitarian track of the intra-Syrian talks, a United Nations humanitarian mediator has warned.