FAO/Giulio Napolitano
Drying corn on the hood of the family truck in Manyandzeni Village, Swaziland.
9 March 2016

Thirty-four countries, including 27 in Africa, are currently in need of external assistance for food due to drought, flooding and civil conflicts, according to a new United Nations report released today.

The figure has grown from 33 last December, after the addition of Swaziland, says the Food and Agriculture Organization (FAO) in its Crop Prospects and Food Situation report.

(GIEWS), points out that drought associated with El Niño has “sharply reduced” 2016 crop production prospects in Southern Africa, while expectations for the harvest in Morocco and Algeria have been lowered due to dry conditions.

Also in areas of Central America and the Caribbean, ongoing dry conditions linked to El Niño may affect sowings of the main season crops for the third consecutive year.

Moreover, FAO stresses that persistent conflicts in Iraq, Syria, Yemen, Somalia, and the Central African Republic have taken a heavy toll on the agricultural sector, further worsening the humanitarian crisis in those countries. In most cases, the impact of conflict extends into neighbouring countries such as Cameroon and the Democratic Republic of Congo that are hosting refugee populations.

In several countries already in need of external assistance for food, the report finds that conditions generally worsened in the past three months, mainly in the Southern Africa sub-region, where food prices have reached record highs.

It also warns that last year’s reduced production would negatively impact the food security situation in the Democratic People’s Republic of Korea, where “most households were already estimated to have borderline or poor food consumption.”

Elsewhere, the outlook for the 2016 crops already in the ground, mostly winter grains in the northern hemisphere, is generally favourable. Early forecasts indicate large 2016 wheat crops in most countries of Asia.

♦ Receive daily updates directly in your inbox - Subscribe here to a topic.
♦ Download the UN News app for your iOS or Android devices.
El Niño 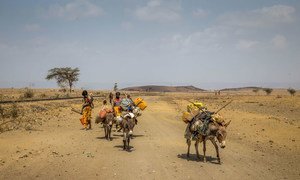 The 2015-2016 El Niño, one of the strongest on record, has passed its peak, but its humanitarian and economic impacts will continue for many months to come, the United Nations weather agency has announced, adding that lessons learned from this climate phenomenon would help build global resilience to weather related hazards.