UNICEF
Emergency supplies for some 350,000 Fijians, including 120,000 children, affected by Cyclone Winston, were flown in by UNICEF from its global supply hub in Copenhagen, Denmark.
8 March 2016

A large plane carrying life-saving supplies arrived in Fiji on Monday, in a big boost to the United Nations emergency response to Cyclone Winston, one of the strongest storms in history.

“These supplies will allow us to continue our work in partnership with the Government of Fiji and international donors to get assistance to those who need it most,” said Karen Allen, Pacific Representative of the UN Children’s Fund (UNICEF).

The Boeing 777, chartered by the agency, flew to Nadi International Airport from its global supply hub in Copenhagen, Denmark, carrying nearly 100 metric tonnes of emergency supplies for the 350,000 Fijians, including 120,000 children, affected by Winston.

The supplies include 8,000 water containers, 7,480 tarpaulins, 3,250 mosquito nets, educational supplies sufficient for 20,000 students, oral rehydration salts for the treatment of diarrhoea and dehydration, micronutrient powders to supplement the feeding of underweight children and other essential medical supplies. They will be urgently distributed by the Government to most-affected communities.

“This unprecedented disaster for Fiji has affected 40 per cent of Fiji’s population,” Ms. Allen said, noting that it has uprooted children’s lives, taking away homes, schools, water supplies, health facilities, food crops and family livelihoods. Within 36 hours of the cyclone’s landing, affected communities had begun to receive UNICEF emergency supplies.

She said that the supplies will be a big boost to the agency’s relief effort, as they complement pre-positioned emergency kits already received from UNICEF’s office in Vanuatu. More are scheduled to arrive from the Solomon Islands in the coming days.

While thanking partners and donors, including the Governments of Australia, New Zealand, Sweden and the United Kingdom, for their significant contributions to the relief efforts, Ms. Allen stressed that more funds are urgently needed for additional supplies.

UNICEF had already assisted more than 26,000 people whose homes and communities were ripped apart by Winston’s destructive winds. “But it soon became apparent that we would also need more supplies – the scale of this disaster is truly nationwide, there are far too many children and families who don’t have a roof over their heads or even the most basic of essential services such as clean, safe drinking water,” Ms. Allen said.

UNICEF has appealed for $7.1 million for the needs of Fiji’s affected children and communities, with special attention to especially vulnerable groups and those in hardest-to-reach parts of the country.

♦ Receive daily updates directly in your inbox - Subscribe here to a topic.
♦ Download the UN News app for your iOS or Android devices.
fiji|cyclone

UN relief chief saddened by deaths due to cyclone in Bangladesh, India 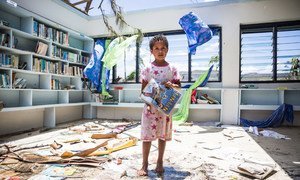